(lōbēl`yə), any plant of the genus Lobelia, annual and perennial herbs of tropical and temperate woodlands and moist places. Most lobelias have blue or purple flowers on a long (1–4 ft/30–122 cm), leafy stem. Native North American species, often cultivated as ornamentals, include the only red lobelia, the cardinal flower (L. cardinalis), which is becoming rare; the blue lobelia (L. syphilitica), used by Native Americans for the treatment of syphilis; and Indian tobacco (L. inflata), named for its odor. The dried leaves and stems of Indian tobacco and sometimes of other species furnish medicinal lobelia, the source of lobeline, which is used as a respiratory stimulant but is poisonous in overdose as are the roots. L. erinus, introduced from S Africa, is a common border plant. Most botanists include Lobelia and related genera in the family Campanulaceae (bluebell family); others consider them a separate family, the Lobeliaceae. Lobelia is classified in the division MagnoliophytaMagnoliophyta
, division of the plant kingdom consisting of those organisms commonly called the flowering plants, or angiosperms. The angiosperms have leaves, stems, and roots, and vascular, or conducting, tissue (xylem and phloem).
..... Click the link for more information. , class Magnoliopsida, order Campanulales, family Campanulaceae.
The Columbia Electronic Encyclopedia™ Copyright © 2013, Columbia University Press. Licensed from Columbia University Press. All rights reserved. www.cc.columbia.edu/cu/cup/ 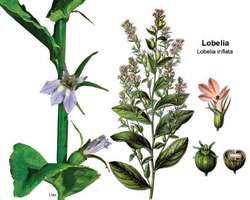