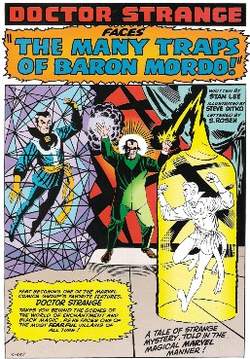 (pop culture)
Transylvania-nobleman-cum-sorcerer Karl Amadeus Mordo, otherwise known as Baron Mordo, was the apprentice to the exalted sorcerer called the Ancient One, who helped transform destitute neurosurgeon Stephen Strange into the Master of the Mystic Arts, Dr. Strange. Created by writer-editor Stan Lee and artist Steve Ditko for Marvel Comics' Strange Tales #111 (1963), Mordo's pride and lust for power have made him a loner for much of his villainous career. From the beginning he has been obsessed with destroying Dr. Strange, and little has changed during their long rivalry. The megalomaniac Baron Mordo is considered among the most powerful Earth-born sorcerers operating in the Marvel Universe. Mordo derives his magic from three major sources: personal powers of the mind and body (affording him mesmerism, astral projection, and thought-casting abilities); powers gained by amassing the universe's ambient magical energy (employed for effects such as teleportation and energy projection); and powers gained through invoking entities or objects of power residing in mystical dimensions. Mordo is an expert at invoking spells, whether original or those found in various mystic texts. He has been known to call on otherworldly powers whenever he needs a little boost, including the most demonic of the Marvel Universe, Dormammu and Satannish. Years of rage finally took a toll on Mordo, who developed “terminal cancer” and (temporarily) disappeared from comics' pages in 1996 (Dr. Strange #87). However, the occultist left behind an equally destructive force to be reckoned with: his daughter, Astrid. Baron Mordo unexpectedly turned up alive to attack Dr. Strange once more in The Amazing Spider-Man #500 (2003), written by J. Michael Straczynski, who also penned a revised version of Dr. Strange's origin, featuring Mordo, in the miniseries Strange (2004–2005). In television animation, Baron Mordo (voiced by Tony Jay) appeared in the Spider-Man series that ran from 1994 to 1998.
The Supervillain Book: The Evil Side of Comics and Hollywood © 2006 Visible Ink Press®. All rights reserved.

Feedback
Flashcards & Bookmarks ?
Please log in or register to use Flashcards and Bookmarks. You can also log in with
Flashcards ?
My bookmarks ?
+ Add current page to bookmarks
Mentioned in ?
References in periodicals archive ?
The original 2016 Doctor Strange film concluded with Strange's mentor and comrade Baron Mordo (Chiwetel Ejiofor) vowing to cut down the world's supply of sorcerers.
Get ready for first scary Marvel film- 'Doctor Strange in the Multiverse of Madness'
There was quite a twist with your character, Baron Mordo, at the end of 'Doctor Strange'.
Chiwetel Ejiofor makes feature directorial debut
That voice advising our hero in the beginning belongs to Chiwetel Ejiofor, who's playing sorcerer Baron Mordo.
Benedict Cumberbatch as Doctor Strange: What we think so far