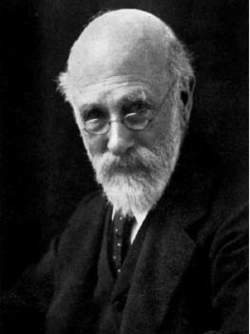 Sir William Fletcher Barrett was Professor of Physics at the Royal College for Science, Dublin, from 1873 to 1910. He was also one of the distinguished early pioneers of psychical research.

In 1874, at the age of 29, he started his first investigation of mesmerism and the mesmeric trance. From there his interest turned to Spiritualism and its physical phenomena. Initially, he thought phenomenon such as levitation must be due to hallucination. He later admitted that he had personally experienced phenomena in conditions where fraud was impossible, such as outdoors. In 1876 he submitted a paper, Some Phenomena Associated with Abnormal Conditions of the Mind, to the British Association for the Advancement of Science. The paper was rejected by the Biological Committee but accepted by the Anthropological Sub-section, with the casting vote of chairman Dr. Alfred Russel Wallace. The paper dealt with Barrett’s own investigations and experiences, and ended with the recommendation that a committee be formed for the systematic investigation of the phenomena of mesmerism and Spiritualism. Several prominent members, including Dr. Wallace and Sir William Crookes, applauded the recommendation but no action was taken on it.

In 1882, Barrett instigated a meeting in the office of the British National Association of Spiritualists, which led to the founding of the Society for Psychical Research. Over the years he wrote a number of books, including On the Threshold of a New World of Thought (1908), Psychical Research (1911), Swedenborg: the Savant and the Seer (1912), On the Threshold of the Unseen (1917), Au Seuil de l’Invisible (1923), The Divining Rod (1926), and Death-Bed Visions (1926). One of his main interests was the divining rod and the art or science of dowsing.

Barrett visited the United States and founded the American Society of Psychical Research in Boston in 1885. One of the founding members was the renowned Harvard psychologist and professor of philosophy, William James.

After many years of research, Barrett concluded that there was a spiritual world of existence, there was survival of the spirit after death, and occasional communication between the worlds was possible.