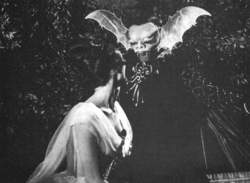 A terrifying example of a film version of a vampire bat from the movie Blood and Roses.

Vampire bats, three species of which exist in Mexico and Central and South America, have become an integral part of the modern myth of vampires, and bat symbolism is inseparable from current iconography of the contemporary vampire. Europeans discovered and first described vampire bats in the sixteenth century. Modern biologists who specialize in the study of bats recognize as vampires only three species of the mammalian family Phyllostomatidae, subfamily Desmodontinae. The most common is Desmodus rotundus. Rarer are Diaemus youngi and Diphylla ecaudata.

The Nature of Vampire Bats: Bats are the only mammals that can fly. There are almost one thousand species, nearly one-fourth of all the mammalian species now on earth. The largest have a wingspan of several feet. Much of their time is spent sleeping while hanging upside down, a position from which they can drop into space and easily begin flying.

Vampire bats are characteristically distinguished from other bats by their feeding habits. Whereas most species of bats feed off fruits and other plants and/or insects, the vampires live exclusively off the blood of various vertebrates. Diaemus and Diphylla will feed on birds, but Desmodus, the common vampire bat, feeds exclusively on other mammals. Their teeth include razor-sharp incisors with which they cut into their prey. Rather than suck the blood, however, they allow it to flow and lap it up with their tongue, somewhat like a cat drinking milk. They also seem to have an anticoagulant substance in their saliva that helps keep the blood of their victims flowing during feeding. They are quite agile and mobile and can walk, run, and hop, unlike some species. They have a good sense of smell and large eyes that provide clear vision. The average adult vampire bat nightly consumes some fifteen milliliters of blood—approximately forty percent of their prefeeding weight. After feeding, the stomach and intestinal area appear bloated, and some of the feast will have to be digested before the bat can return home.

In real life, the vampire bat has emerged as a problem among South American farmers as a carrier of rabies, which it transmits to the cattle it feeds on. Vast eradication programs have been developed but with mixed results.

Two sixteenth-century Europeans, Dr. Oliedo y Valdez (1526) and M. Giroalme Benzoni, (1565) were the first to bring word of the vampire bat to their homelands. Benzoni, in his History of the New World, notes:

There are many beasts which bite people during the night; they are found all along this coast to the Gulf of Paria and in other areas, but in no other part are they as pestiferous as in this province Nuevo Cartago, today Costa Rica; they have gotten to me at several places along this coast and especially at Nombre de Dios, where while I was sleeping they bit the toes of my feet so delicately that I felt nothing, and in the morning I found the sheets and mattresses with so much blood that it seemed that I had suffered some great injury. (Turner, 2)

A reoccurrence of this rare event (as vampire bats do not normally like human blood) was noted several centuries later by Charles Waterton, author of Wanderings in South America, who awakened one morning after sleeping on a hammock to find his friend complaining that vampire bats had attacked him. Waterton looked into the matter:

On examining his foot, I found the vampire had tapped his great toe: there was a wound somewhat less than that made by a leech; the blood was still oozing from it. Whilst examining it, I think I put him in a worse mood by remarking that an European surgeon would not have been so generous as to have blooded him without making a charge. (Robertson, 71)

Waterton had a much friendlier attitude toward the vampires:

I had often wished to have been once sucked by the vampire…. There can be no pain in the operation, for the patient is always asleep when the vampire is sucking him; and for the loss of a few ounces of blood, that would be a trifle in the long run. Many a night have I slept with my foot out of the hammock to tempt this winged surgeon, expecting he would be there; but it was all in vain.

On his journey around the world in the 1880s, Charles Darwin observed the vampire bat feeding and wrote the first brief “scientific” account, which was published in 1890.

The Bat in South American Folklore: Bats in general, and the vampire bat in particular, have not gone unnoticed by the peoples of South America, who have integrated them into their mythology. E. W. Roth, an ethnologist who studied the people of Guyana (Guinea), had informally designated one of their plants “bat’s bane” because its juice, when rubbed on the toes, would kill an attacking bat. The native folklore contains several tales of such bats. Camazotz was a significant deity among the ancient Maya of Guatemala. A god of the caves, he was seen as dwelling in the Bathouse in the Underworld, and he played a key part in the story told in the Maya’s sacred book, Popul Vuh.

The Bat in Western Folklore: Although the bat was not tied to the vampire myth until the nineteenth century, it has appeared repeatedly since the days of Aesop and his fables. Early observers of bats commented on the likeness in features with human beings. They also observed bats suckling their young from a pair of breast nipples. Because bats are creatures of the night, in many cultures, they came to be associated, as did the owls, with the unknown, the supernatural, and more sinister aspects of life. In Greek mythology, bats were sacred to Proserpina, the wife of Pluto, god of the underworld. In the Middle Ages, bats came to be associated with the Christian devil. They were often believed to be signs of—and even agents of—death.

Bats did have some positive associations. Among the Gypsies, for example, they were seen as bearers of good luck. Gypsies prepared small bags of dried bat parts for children to wear around their necks. In Macedonia, bat bones were kept as good luck objects. Possibly the most positive use of the bat has been in heraldry. Several families in both continental Europe and the British Isles have a bat on the family heraldic crest. The Wakefield family crest, for example, is topped by a bat with wings outspread and also has three owls, another night creature, on the shield.

The Spanish conquistadors interpreted the new variety of bats, the blood-drinking ones that they found in Mexico and South America, in light of both the prior image of bats in Western folklore and their traditional beliefs about “human” vampires. For example, they not only called them vampire bats but also described them as “bloodsucking” creatures rather than “blood-lapping” ones. Over the next centuries the association of bats and vampires gradually grew stronger. William Blake utilized a vampire bat in the artwork for his epic poem Jerusalem to symbolize the Spectre, the annihilating and constricting energies in the human psyche. Bats also appear in Francisco Goya’s Los Caprichos (1796–98), where they hover above the figure of Reason in “The Sleep of Reason Produces Monsters” and behind the babies in “There Is Plenty to Suck.” Although bats and vampires were often connected by the mid-nineteenth-century (for example, they appear on the cover page of Varney the Vampyre), it was not until Dracula (1897) that they became inextricably associated. In Dracula, the bat is one of the creatures of the night that Dracula rules and into which he can transform. The bat appears early in the story and hovers outside the window of Jonathan Harker‘s room at Castle Dracula. Later, Harker observes Dracula assuming batlike characteristics as he crawls down the outside wall of the castle. Once the action transfers to England, Dracula’s presence is more often signaled by the bat than by his human form. Dracula’s appearances in bat form are always at night, and the association of the vampire with the bat contributed substantively to the twentieth-century understanding of the vampire as an exclusively nocturnal being.

With the popularization of vampires in the post-World War II West, the bat became one of the most common images in horror movies and during Halloween. Naturalists who study bats have carried on a “public relations” program for them because they believe bats have a bad image as a result of their popular association with Dracula. Bats have taken center stage in several vampire films including Bats (1999), Fangs (2001) Vampire Bats (2005), and Bats: Human Harvest (2007).

Feedback
Flashcards & Bookmarks ?
Please log in or register to use Flashcards and Bookmarks. You can also log in with
Flashcards ?
My bookmarks ?
+ Add current page to bookmarks
Mentioned in ?
References in periodicals archive ?
uk with its range of kit including capes, masks, broomsticks, bats, vampire teeth and blood capsules.
Carol@mirror.co.uk: Spooky sites