(geology), forms and spatial position of rocks in the earth’s crust. Sedimentary and metamorphic rocks usually occur in the form of layers or strata bounded by roughly parallel surfaces. In their original, undisturbed bedding sedimentary rocks are arranged almost horizontally (see Figure 1); less frequently they have an initial dip in one direction or flexures caused by the relief of the surface on which they were deposited. Disturbances of the initial bedding of rocks or their dislocation result from two types of causes: endogenic, including tectonic movements, and exogenic—the action of surface and, especially, ground waters that causes landslides, avalanches, and dissolving of rocks.

Three types of rock bedding are distinguished according to the conditions of accumulation of the sedimentary rocks: transgressive, regressive, and migrational bedding.

Three main groups of rock beddings are distinguished according to the nature of disturbances: folded, or plicated, bedding (without a discontinuity of the strata); fractured, or disjunctive, bedding; and forms of disturbance related to the intrusion of magmatic masses or highly plastic rocks (salts and gypsums) into previously formed rock strata.

Among the folded forms of disturbed rock bedding a distinction is made between a unilateral dip in strata at different angles (monoclinal folding) and flexures in strata with the formation of folds having highly varied dimensions and shapes (anticlinal, synclinal, right-angle, oblique-angle, inverted, and others). Among the fractured dislocations there 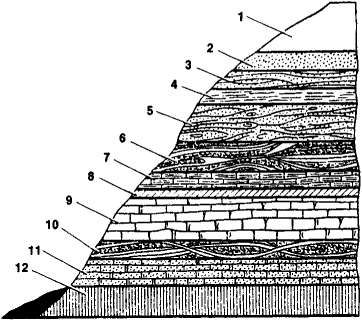 are steeply dipping dislocations which cause a break in the continuity of strata, with movement of adjacent blocks of rock vertically, horizontally, or in a sloping direction (faults, reverse faults, strike-slip faults, extensional faults, and over-thrusts). Large-scale, gently inclined or horizontal fractures with displacement for dozens of kilometers are called over-thrust sheets. The breaching forms of rock bedding in sedimentary strata include diapir folds (folds “with a plastic piercement core”) and folds that occur with the intrusion of molten magma. Where there are complexes of strata of different ages, two basic types of rock bedding are distinguished: regular bedding (conformity) and irregular bedding (unconformity). These terms are used to define stratigraphic and structural relationships. Stratigraphically regular bedding is characterized by continuity in the accumulation of rocks; with stratigraphic unconformity, particular stratigraphic subdivisions are omitted in the sedimentary, igneous, and metamorphic strata (see Figure 2). With structurally regular

bedding, complexes of rock of different age occur parallel to one another, and the complex of upper layers repeats the forms of bedding of the lower layers. With structural unconformity the lower and upper complexes are bedded differently, and the base of the upper complex overlies the lower complex’s various strata, which usually have steeper angles of inclination (see Figure 3). The arrangement of layers on the surface of an older stratum which has been cut obliquely by erosion is called inclined bedding; “ingressive bedding” is used when depressions in an ancient complex of rock are filled with younger layers deposited by a rapidly advancing sea.

Magmatic rocks have various forms of bedding. Lavas which flow out onto the earth’s surface harden in the form of streams and sheets (effusive rocks); when magma hardens at shallow depths beneath the earth’s surface it forms stocks, veins, dikes, tabular sloping bodies (sills), and laccoliths (extrusive and hypabyssal rocks). When the magma cools at considerable depths (more than 1.5–2 km) it forms stocks and batholiths (intrusive rocks). The position of individual layers and complexes in space is determined by measuring the so-called elements of rock bedding: the direction of trend, the direction of dip, and the angle of dip. These elements are either measured with a dip compass or computed by geometric constructions based on data from structural maps or information from strata derived from boreholes. The aggregate of questions relating to rock bedding is studied by structural geology.

Feedback
Flashcards & Bookmarks ?
Please log in or register to use Flashcards and Bookmarks. You can also log in with
Flashcards ?
My bookmarks ?
+ Add current page to bookmarks
Mentioned in ?
References in periodicals archive ?
Both the joints and horizontal bedding of rocks trigger and essentially promote the development of mass movements.
Slope processes at the North Estonian Klint/Nolvaprotsessid Pohja-Eesti paekaldal
Let us note for comparison that the original thin bedding of rocks is sometimes preserved despite heavy metamorphism.
Possibilities of stratigraphical interpretation of the Dividal Group in the Kilpisjarvi area (Finnish Lapland), based on lithogenetic characteristics/Soome Lapimaa Kilpisjarvi umbruse Dividal-ruhma kivimikompleksi stratigraafilise interpretatsiooni voimalustest litogeneetiliste tunnuste alusel