beech, common name for the Fagaceae, a family of trees and shrubs mainly of temperate and subtropical regions in the Northern Hemisphere. The principal genera—Castanea (chestnut and chinquapin), Fagus (beech), and Quercus (oak, including the cork oak)—form a dominant part of temperate woodland vegetation and are highly valued throughout the world for hardwood timber. Some of their species are also cultivated for their edible fruits and as ornamental and shade trees. The beeches have distinctive smooth, silvery gray bark and pale green leaves that turn golden in autumn and are often winter-persistent. The tough, strong, easily worked wood is used for furniture, flooring, crating, and woodenware. Beechnuts have a sweet flavor but are now seldom eaten except locally in poorer areas of Europe. The American beech (F. grandifolia) grows in rich soil over much of the NE United States and Canada. A slow-growing tree, it is declining in abundance through lumbering and through beech bark disease, a fungal infection that attacks the tree through holes bored in its bark by a scale insect. The blue, or water, beech is an American hornbeam of the birch family. The European beech (F. sylvatica) is an important forest tree, especially in S and Central Europe, and is valued for its wood and for an oil extracted from the nuts. Several of its varieties have reddish brown or purplish leaves and are cultivated in America as ornamentals, e.g., the purple and copper beeches. The southern beeches belong to the small genus Nothofagus; in the Southern Hemisphere, the importance of their timber is second only to that of the eucalypts. The beech family is classified in the division Magnoliophyta, class Magnoliopsida, order Fagales. 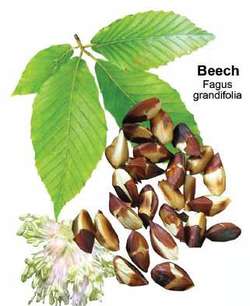 Tree grows to 100 ft. (doesn’t even start producing seeds till they are 50 years old) Gray bark with edible triangular nuts which are used to expel worms. Bark used for lung problems and leaves used as external wash for skin problems like poison ivy, diaper rash or burns. Young leaves are edible. The sweet seeds (remove brown covering) are totally edible and can be crushed into a butter, or mixed with liquid, added to flour or berries. Don’t eat too many raw nuts.
Edible Plant Guide © 2012 Markus Rothkranz
The following article is from The Great Soviet Encyclopedia (1979). It might be outdated or ideologically biased.

(Fagus), a genus of monoecious plants of the family Fagaceae. Beech trees are up to 50 m in height and 2 m in diameter, with smooth, gray bark. There are ten species in the extratropical regions of the northern hemisphere; in the USSR there are three species. The leaves are deciduous, simple, usually entire, and often have hairs along the edges. Beeches blossom simultaneously with the unfolding of the leaves and are pollinated by the wind. Fruitbearing begins in 20-40 years in single-standing specimens and in 60 years or more in dense stands. The acorn-like fruits (so-called nuts) have a woody jacket and are gathered in groups of two to four in a four-lobed cupule located on a peduncle. On the outside the cupule is covered with needle-like or other types of processes; by the time the fruit ripens the cupule expands and becomes woody. Beeches are shade-tolerant, but heat-loving. In the mountains they grow at altitudes up to 2,300 m. Many beeches are valuable forest-forming and mountain-protecting species. They form pure or mixed forests and live to 400 years or more.

Beech wood is dense, heavy, and takes a high polish; it decays quickly in the open air, but in water and in moist conditions it is very durable. It is used for manufacturing musical instruments, veneers, parquet, curved furniture, methyl alcohol, and so on. The fruit contains a poisonous alkaloid, fagine, which quickly decomposes when heated; salad and industrial oils are prepared from the fruit. The oil cake is used to feed swine. Antarctic beeches belong to the genus Nothofagus.

[bēch]
(botany)
Any of various deciduous trees of the genus Fagus in the beech family (Fagaceae) characterized by smooth gray bark, triangular nuts enclosed in burs, and hard wood with a fine grain.
McGraw-Hill Dictionary of Scientific & Technical Terms, 6E, Copyright © 2003 by The McGraw-Hill Companies, Inc.

Feedback
Flashcards & Bookmarks ?
Please log in or register to use Flashcards and Bookmarks. You can also log in with
Flashcards ?
My bookmarks ?
+ Add current page to bookmarks
Mentioned in ?
References in periodicals archive ?
"One of the criticisms is that Perry Beeches is stealing pupils from other schools, but we are putting schools in areas where no-one else would dare," Mr Nolan said.
Two new Brum academies are given approval
Perry Beeches was threatened with closure just five years ago amid poor exam results and has since gone on to be named "most improved" school in the country.
NEW SCHOOL PROJECT FOR TOP BRUM HEAD
Parents, pupils and staff at Perry Beeches secondary, junior, infant and nursery schools, along with Priestley Smith special school, will all be helping out on Saturday, July 5.
Seventh heaven
Sarah Dorsett, extended schools co-ordinator for Perry Beeches, said: "We are looking to share information about activities and groups.
School summer fun; GRET BARR
Perry Beeches II, based in the Jewellery Quarter, owed almost PS100,000, Perry Beeches III, in Lee Bank, owed PS245,000 and Perry Beeches V, in Small Heath, a sum of PS130,000.
Government's PS500,000 bill after schools' financial woes; Academy chain has to pay back money for unfilled pupil places
Both commuters and discerning housebuyers alike love The Beeches, located within the exciting Heartlands development rapidly taking shape midway between Edinburgh and Glasgow just one mile west of Whitburn in West Lothian.
LAST FEW REMAINING AT UNIQUE ALL-BUNGALOW DEVELOPMENT; Advertorial
Only after Beeches returned home did he realise the roll of notes was missing - at that point he "saw red" and returned to Middlesbrough to search for the thief.
Dad is jailed over kidnap
With 20 apartments in total, all housed in an impressive building and surrounded by beautiful landscaped grounds, The Beeches has been particularly popular with professionals who appreciate the convenient location for commuting.
Your Home: Make life a Beech
The wood seasons evenly without excessive degrade, it air-dries faster, and is less prone to tension wood, split, warp, or collapse than the other New Zealand beeches (NZFS 1965b, Wardle 1984, Clifton 1994).
The wood properties of New Zealand silver beech (Nothofagus menziesii), a lesser-known hardwood species
In the early 1970s, he began to receive occasional calls to examine huge beeches that turned into skeletons with little warning.
Microbial suspect named in beech deaths. (Bleeding Trees)
"Perry Beeches has always been proud that we are a family - and we are a family school serving a community.
LIAM NOLAN'S RESPONSE
Perry Beeches in Great Barr was threatened with closure five years ago amid poor exam results when Liam Nolan took over.
Top school in spin-off plan to meet clamour for places