, Roman emperor
Valerian (Publius Licinius Valerianus) (vəlērˈēən), d. after 260, Roman emperor (253–60). He held important posts, both civil and military, under the emperors Decius and Gallus. After the short reign of the former general Aemilianus, Valerian was proclaimed emperor. In 257 he organized a general persecution of the Christians. Although not an incapable man, he was nevertheless unsuited to rule in such a critical time, for N Italy, Greece, and Asia Minor were falling to the barbarians and to the Persians. Appointing his son, Gallienus, as coregent, Valerian undertook a campaign in the East against Shapur I of Persia, who destroyed the Roman army and took (260) the emperor prisoner. Valerian died in captivity and was succeeded by Gallienus.

valerian, common name for some members of the Valerianaceae, a family chiefly of herbs and shrubs of temperate and colder regions of the Northern Hemisphere; a few species, however, are native to the Andes. The name valerian is popularly used for plants of the genus Valeriana and also for other related plants that are cultivated in flower gardens or borders for the numerous small and fragrant blossoms. The common valerian (V. officinalis) is sometimes grown under the name garden heliotrope, although it is unrelated to the true heliotropes. A perennial herb, it was used as a condiment during the Middle Ages and later as the source of a perfume oil (from the scented roots and rhizomes). It is still cultivated in parts of N Europe and in some Asian countries for the essential oil, sometimes substituted for that of the related spikenard, and for the dried roots and rhizomes, also called valerian and used medicinally as a sedative and carminative. The active ingredients are valopotriates. In the N United States the common valerian is found naturalized in the North, and several species grow indigenously elsewhere, e.g., V. ciliata on the prairies and V. uliginosa in eastern swamps and moist woodlands. The red valerian, or Jupiter's-beard (Centranthus ruber), and the African valerian (Fedia cornucopiae) are among other ornamental species native to the Old World. The valerian family is classified in the division Magnoliophyta, class Magnoliopsida, order Dipsacales. 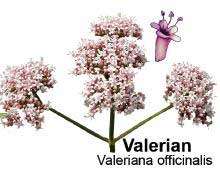 a sedative drug made from the dried roots of V. officinalis

any of various Eurasian valerianaceous plants of the genus Valeriana, esp V. officinalis, having small white or pinkish flowers and a medicinal root