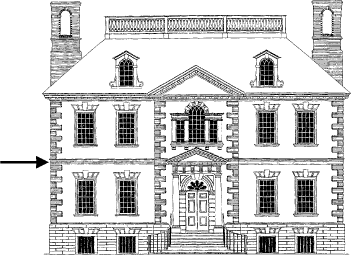 belt course
1. A horizontal band of masonry extending horizontally across the façade of a building and occasionally encircling the entire perimeter; usually projects beyond the face of the building and may be molded or richly carved. Also called a stringcourse or band course; called a sill course if set at windowsill level.
2. A horizontal board across front face or around a building, often having a molding. 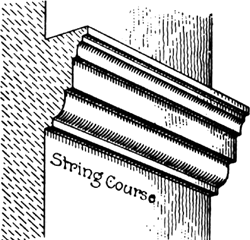 stringcourse
A horizontal band of masonry, generally narrower than other courses, extending across the façade of a structure and in some instances encircling such decorative features as pillars or engaged columns; may be flush or projecting, and flat-surfaced, molded, or richly carved; a bond course.
McGraw-Hill Dictionary of Architecture and Construction. Copyright © 2003 by McGraw-Hill Companies, Inc.

Feedback
Flashcards & Bookmarks ?
Please log in or register to use Flashcards and Bookmarks. You can also log in with
Flashcards ?
My bookmarks ?
+ Add current page to bookmarks
Mentioned in ?
References in periodicals archive ?
The yellow, green and black belt courses will be offered in order based on demand.
In the eight-day black belt course, students will gain comprehensive knowledge and applicable skills of the methodology, and master the tools to successfully execute mid-to large-scale, end-to-end, enterprise wide operational improvement projects.
BTC to offer business efficiency classes
"I taught all of the yellow belt courses and I've met a lot of Marines from different backgrounds face-to-face," he said.
"I only began to understand the theory behind it after I took white and yellow belt training," Martinez said, "but it really came together during a 2007 green belt course at Marine Corps Air Station Yuma.
Marines innovate, create solutions for the flight line: Marines from Marine Aviation Logistics Squadron (MALS) 39 shared their stories of how they improved operational readiness for H-1 U.S. Marine Corps Light Attack helicopter squadrons during a Boots on Ground (BoG) visit at Marine Corps Base Camp Pendleton, California, April 27
Most of the structures have been torn down, leaving only the five sandstone buildings Francis Clergue built as part of the original mill development in the early 1900s, which are noteworthy fOr their Richardsonian Romanesque style, characterized by round arches, semi-circular arches on windows and belt courses.
Destination sault Ste. Marie: market, event space earmarked for fanner mill site
Since 2009, green belt courses have been taught throughout the combat zone.
Lean Six Sigma Improves Base Closure Efficiency: five officers from the 18th Combat Sustainment Support Battalion used Lean Six Sigma to improve the effectiveness of the base closure assistance teams that were supporting base closure and transfer efforts in Afghanistan
As for my Hail Mary, look no further than 150/1 shot John Senden who's a run-of-the-mill player, but Woods has remarked that this course is like the Australian sand belt courses.
Tiger is too long! TRY G-MAC AT A TASTY 25/1 FOR THE US OPEN
"All the cadets follow the same LSS framework, the same training taught at other green and black belt courses across the Army," said Ronald E.
Army News Service (June 4, 2007): Lean Six Sigma efforts near $2 billion in savings