Belvedere (bĕlˈvədēr, Ital. bālvādĕˈrā), court of the Vatican named after a villa built (1485–87) for Innocent VIII. The villa was decorated with frescoes by Pinturicchio and others; a chapel painted by Mantegna was demolished when the villa was made part of the Museo Pio-Clementino at the end of the 18th cent. The Belvedere court, connecting the villa and the Vatican, was designed (1503–4) by Bramante for Julius II to include an architectural garden, a permanent theater, a museum building, and a statue court. The Laocoön, discovered in 1506, was placed in the statue court; in 1511 the Apollo Belvedere (see under Apollo, in Greek religion) was installed in a special niche. When Bramante died in 1514, only a portion of the Belvedere was completed; many modifications were made under a succession of architects including Giuliano Sangallo, Raphael, Peruzzi, and Antonio Sangallo. Now a museum, the Belvedere still contains the Laocoön and the Apollo as well as other rare works of classical antiquity.

A building, architectural feature, or rooftop pavilion from which a vista can be enjoyed.

(1) A tower, superstructure (most often round), or small, separate structure on an elevated spot, looking out on a distant view.

(2) The customary name for some palace structures located in beautiful natural settings, such as the summer residence of the pope in the Vatican (15th—16th centuries) and palaces in Prague (1536–60, architects G. Spatio and others), Vienna (1714–24, architect L. Hildebrandt), and Warsaw (1818–22, architect Ia. Kubitskii). 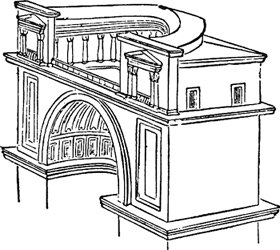 belvedere, 1 of the Vatican
1. A rooftop pavilion from which a vista can be enjoyed.
2. A gazebo.
3. A mirador.
McGraw-Hill Dictionary of Architecture and Construction. Copyright © 2003 by McGraw-Hill Companies, Inc.

a building, such as a summerhouse or roofed gallery, sited to command a fine view
Collins Discovery Encyclopedia, 1st edition © HarperCollins Publishers 2005

Feedback
Flashcards & Bookmarks ?
Please log in or register to use Flashcards and Bookmarks. You can also log in with
Flashcards ?
My bookmarks ?
+ Add current page to bookmarks
Mentioned in ?
References in periodicals archive ?
Upon completion of the acquisition, Belvedere Advisors will operate as an independent, wholly owned subsidiary of Northern Trust Investments, Inc., Northern Trust Asset Management's primary SEC registered investment advisor.
Northern Trust Asset Management Purchases Belevedere Advisors to Acquire Emotomy Platform
Before ACE's acquisition of Chubb in 2016, Belvedere had spent 31 years with Chubb & Son, starting as an underwriter in executive protection for its Long Island branch.
CorRisk Solutions Hires Belvedere to Professional Liability Team in New York
The hotel offers easy access to historical landmarks, is only a short walk away from Vienna's main train station and guests can explore the new city district Quartier Belvedere and its peaceful green surroundings.
Hyatt announces debut of Andaz brand in Austria with Andaz Vienna Am Belvedere
The ChoiceOne Belvedere Square center, features private exam rooms, a triage area, and state-of-the-art equipment, including an on-site x-ray facility.
ChoiceOne, UM St. Joseph to open new urgent care center
Paying homage classic Espresso Cafe Belvedere open its doors two week Cafe Belvedere will serve new twists on classic coffee cocktails, inspired by the Schofields' experiences at some of London's top bars including The Savoy's American Bar, as well as The Tipping Club in Singapore.
Two week coffee pop up coming to Spinningfields; ADVERTISING FEATURE CAFE BELVEDERE WILL BE SERVING-UP FRESH TWISTS ON CLASSIC COFFEE COCKTAIL RECIPES..
The iconic design is adorned with sharp edges that signify a fusion of the water and rye that gives Belvedere Vodka its distinct dimension and taste.
Belvedere Vodka and Laolu Senbanjo unveil new limited edition bottle in Nigeria
'Come, heed the call to immerse yourself with the natural essences of the Earth that only the Belvedere brand has,' Marek Vojcarcik, mixologist and Belvedere Vodka Asia-
At home in 'Kassa' with vintage, modern furniture
Chal&nbsp;and guests sipped on signature Belvedere cocktails, including the&nbsp;Belvedere Cucumber Smash, while they danced the night away.
On The Scene At The Belvedere x Noisey: Behind the Scene Event At SxSW
And nestling in the corner of the garden is its very own turret or belvedere, which gives the property its name and is believed to date back to the late 19th century.
'Outstanding' country views
in 1996, Belvedere is named after the Royal Belvedere Palace in Warsaw, which is the structure depicted on the vodka's bottle label.
Behind Belvedere's commitment to naturalness
By steeping these fresh ingredients directly into this luxurious spirit, Belvedere ensures that these vibrant flavors are delicately and deliciously drawn out.
Belvedere's most versatile maceration flavour to date