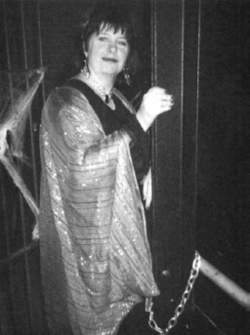 Elaine Bergstrom, a science fiction/horror fiction writer who has written five vampire books, was born in 1946 in Cleveland, Ohio. Bergstrom burst into the vampire scene in 1989 with the publication of Shattered Glass, a novel that introduced a new vampire, Stephen Austra, and his vampire family. They were an old and powerful family who quietly existed as glass workers, specifically the special leaded glass that went into the old cathedrals of Europe and their modern imitations. Shattered Glass brought Austra to the United States where he met artist Helen Wells, who he turned into a vampire like him-self. She became a continuing part of his story. The initial conflict concerned Austra’s renegade brother who forced the “good” Stephen into a final showdown. Included in the novel was one of the more horrorific chapters in vampire literature—Austra’s brother surprised the two lovers in bed in a hotel room and proceeded to vampirize them in a slow torturous act.

The Austra family story was resumed in the subsequent novels, Blood Alone (1990), Blood Rites (1991), and Nocturne (2003), and Elizabeth Austra meets the supernatural-seeking reporter Carl Kolchak in a short story included in the anthology Kolchak: The Night Stalker Chronicles (2005). Bergstrom’s fourth vampire novel, Daughter of the Night (1992), was based on the life of Elizabeth Bathory and was especially inspired by its treatment in Raymond T. McNally‘s biographical study, Dracula Was a Woman. Additional titles from this very productive author have included Tapestry of Dark Souls, (1993), a novel built around the characters of TSR, Inc.’s Ravencroft, one of the vampire-oriented, role-playing games, and an exploration of the further adventures of Mina, the character attacked by Dracula in the original Bram Stoker novel, and its sequel, Blood to Blood: The Dracula Story Continues (2000).