An ornament shaped like a coin or disc, sometimes used in a series in decorative molding designs.
Illustrated Dictionary of Architecture Copyright © 2012, 2002, 1998 by The McGraw-Hill Companies, Inc. All rights reserved 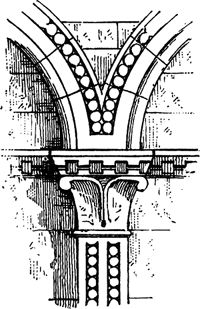 bezant
An ornament shaped like a coin or disk; sometimes used in a series in decorative molding designs.
McGraw-Hill Dictionary of Architecture and Construction. Copyright © 2003 by McGraw-Hill Companies, Inc.

Feedback
Flashcards & Bookmarks ?
Please log in or register to use Flashcards and Bookmarks. You can also log in with
Flashcards ?
My bookmarks ?
+ Add current page to bookmarks
Mentioned in ?
References in periodicals archive ?
He also had a wise and lovely daughter, but that was all, if you don't count the one thousand bezants, because his windmill had been washed away by the flood and his lamb had been taken by the fisherman.
I was left with only one thousand bezants, and with these I bought sheep for her dowry.
The bird flew out the window with a tinkle, and the shrieking pope rushed to catch it in hopes of getting at least one thousand bezants so he wouldn't have to hang himself from the first tree in the city square; but he tripped over the windowsill and fell out.
Tale No. 13
But Mr Bezant claims anything bought for personal use with the cheque book of Wadhurst Estates Limited was repaid and that most items were for work use.
Mr Bezant claimed that all of the items were either repaid or related to his work as farm manager of Morghew Farm, in Tenterden, Kent.
In cross-examination Simon Devonshire, for Wadhurst Park Estates Ltd, said Mr Bezant knowingly avoided declaring expenses to the Inland Revenue.
Mr Bezant replied: 'I didn't know it was necessary.
MD fights dismissal from UK billionaire
Meanwhile, the Bezants' three grown-up children are looking forward to the arrival of the twins almost as much as mum and dad.
For 20 years devoted parents Lynne and Derek Bezant lived with an aching gap in their lives.
JOY: Lynne and Derek Bezant are thrilled at news Picture: ROGER ALLEN; HAPPY FAMILIES: Lynne and Derek with their grown-up children Andrew, Jenny and Chris.
I'M HAVING TWINS.. AT 56; Parents tell of baby joy after 20 yrs of yearning