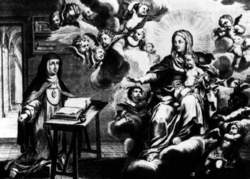 Also known as astral projection, bi-location is the ability to project one’s spiritual being to a separate location and, in essence, be in two places at the same time. Fortean Picture Library.

Bi-location, the ability to be in two locations simultaneously, also known as astral travel or out-of-the-body travel, is a rare event, even in the modern world where discussion of the possibility was heightened as Spiritualism and psychical research blossomed. Both Spiritualism and Theosophy assumed that humans possessed a body double made of a subtle substance usually invisible to the eye. In Theosophy, it was assumed that the spiritual self—the true essence of the individual—assumed several bodies, each more substantive than the last, during the process of moving into the gross physical body. As the person matured, the subtle bodies assumed an image like that of the physical body. Spiritualists usually assumed there existed an astral double, the reality of which accounted for a spectrum of phenomena such as ghosts.

Throughout the twentieth century, psychical researchers attempted to prove the existence of the astral double, most often in examining claims about hauntings and ghosts. However, a variety of living people claimed the ability to project theirastral body, usually while their physical body was in a state of sleep or a trance. The first major exponent of astral travel was Sylvan J. Muldoon (c. 1903–1971), whose experiences became the basis of a series of books coauthored with psychical researcher Hereward Carrington (1880–1958), the first of which appeared in 1929. These books partially inspired the book Astral Projection, by Oliver Fox (pseudonym of Hugh G. Calloway; 1885–1949), which appeared in 1939. Interest continued throughout the century into the New Age movement with the emergence of Robert Monroe (1915–1995), who not only recounted his own Journeys out of the Body (1971), but offered to help other people experience what seemingly had become commonplace with him. Contemporaneously with Monroe, psychic Ingo Swann became the subject of a set of tests by parapsychologists attempting to prove that Swann could astral project.

The problem with astral projection is that, although it is an often intense experience to the individual who reported a projection, there is little in the way of verifying the experience to another. Rare indeed are even anecdotal accounts of the projecting person being seen by another, though a few do exist.

The emphasis in psychical research on astral travel is in part an attempt to offer a basis for understanding tales of bi-location that appear in the lives of various saints. For example, Martin De Porres (d. 1639), who spent his entire life in Peru, was seen to appear in various locations in Mexico or in far-off China or Japan. One popular story had him making repeated appearances to assist captives in northern Africa. De Porres also claimed to have been in other countries, and he often offered detailed descriptions of places he had visited overseas.

The tales of bi-locating saints and the modern studies of astral travel have left a less-than-convincing record of the possibility of such occurrences, and assessment of the reality of such events (though quite real to the ones who experience them) must remain for the future.

Feedback
Flashcards & Bookmarks ?
Please log in or register to use Flashcards and Bookmarks. You can also log in with
Flashcards ?
My bookmarks ?
+ Add current page to bookmarks
Mentioned in ?
References in periodicals archive ?
Readers will discover countless fascinating and pious stories, prophetic dreams and visions, apparitions of Christ and Our Lady, appearances of the devil in disguise, miraculous healings, episodes of bi-location, stigmata, incorruption after death, and more.
Hounds of the Lord
Bi-location being one of the qualifications of sainthood, Mr Redmond may not be in line for a halo after all.
The Big Society? It belongs in a museum
There was a time when Burris could have used the bi-location techniques the mystics he so likes to read about claim to have mastered.
`Broken' unites dual lives
JOHN O'Donoghue is indeed a special man, for he, like the Good Lord, has mastered bi-location and can be in two places at the one time.
AMAZING POLITICAL POWERS.
The committee, which was made up of Ivor's fellow Senators, concluded that the West Cork holiday home could not have been his primary residence, unless he had mastered the art of bi-location.
Ivor's in his ivory tower
Techniques are described in detail for astral bi-location, numerology, energy boosting, contacting spirits of the dead, aura reading, enhancing prosperity, and so much more.
Metaphysical Techniques That Really Work
Grainne added: "St Brigid was able to do it, fair play to her, but I am not good at bi-location yet.
THE SEOIGE MUST GO ON; Emotional farewell as sisters bow out
Then there's bi-location, which means being seen in several places at one time."
A saint or a sinner? local history Did the Devil really torment a young school teacher in Victorian Bootle? Peter Elson reports