(biaxial ferrite core), a ferrite core with a branched magnetic circuit and two apertures that do not intersect and which have perpendicular axes. It is used as a memory or logic element in technical automation facilities and in digital computer technology. 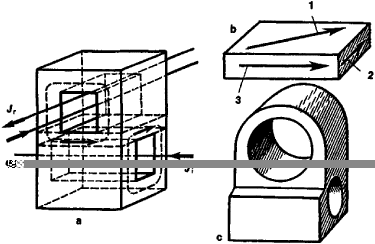 The logic biax differs constructionally from the memory type by the absence of a plug wire. During its operation, the magnetic fluxes and their signs vary in the regions of the magnetic circuit common to both apertures.

There are several varieties of biax that differ in construction (symmetrical and nonsymmetric; Figure 1, c), in properties of magnetic circuit material, and so on. The primary virtues of the biax are its small dimensions, very rapid response (particularly in readout at small energy inputs), high reliability, and comparatively low cost for automated production and sorting.