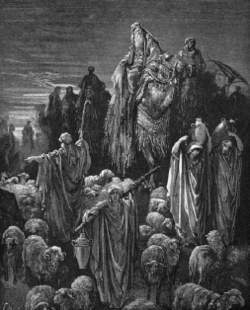 In the Bible, Jacob experienced his final dream about God and His prophecy while on his way to Egypt (1870 engraving by Gustave Doré).

In biblical accounts, the divine–human encounter occurs in a variety of ways, including direct apparitions of God as well as visions and intellectual inspirations. Dreams are one of the more common forms of divine communication. From Genesis to Revelation, God communicates with people through this medium.

Unlike other ancient peoples, such as the Egyptians, ancient Hebrews never actively sought to induce dreams through special practices, because they believed such manipulative divination would provide only false dreams. Furthermore, the Israelites differed from most other Near Eastern peoples in attitudes toward dreams in that they did not view them as coming from the realm of the dead. They also had a different approach to dream interpretation based on principles drawn from the Talmud, which contains the warnings of the prophets against false dreams and false interpreters.

An important difference between the ancient Jewish view of dreams and that of other peoples of the Near East is that the Jews, having become worshipers of one god rather than many special gods, believed that only this god could be the source of the divine revelations that came in their dreams. The Old Testament records only those dreams that helped to consolidate Judaism and confirm the chosen people’s messianic vocation and the spiritual hegemony of their god. Most of the dreams chronicled in the Old Testament come at the beginning of vital stages in Israel’s history.

For the biblical Jews, dreams had the function of summoning up events from the past and opening channels into the future. There were two types of dream accounts in Israel, auditory message dreams and symbolic dreams, which is the same division found more generally in the ancient Near East. In the Bible, symbolic dreams are reported solely by Gentiles—the pharaoh of the Exodus and Nebuchadnezzar—and, for this reason, symbolic dreams are less official than messenger dreams. According to Jewish belief, to derive their proper meaning, symbolic dreams must be interpreted by Jews.

In the Bible, the dream is a direct revelation from God concerning His involvement in human affairs. Some of those having dreams are prominent biblical characters, whereas others are just ordinary people. In the ancient world it was believed that God was more accessible to ordinary people in dreams than in daytime visions because in the latter a more subtle reality must compete with and overcome the perceptions of the senses. Thus, waking visions were obtained with difficulty, and only by those who were by nature already more spiritual.

The most prolific dreamers in the Hebrew Bible are the patriarchs, especially Abraham, Jacob, and Joseph. A particular characteristic of Biblical dreams is that different people, all concerned with the realization of a fundamental event, have dreams with parallel or convergent themes. For instance, in Genesis, Joseph, Jacob, Jacob’s father, the pharaoh, and the pharaoh’s officers all dream about the fulfillment of Joseph’s destiny. Not all dreams and visions reported in the Bible originate from God, although almost all of them have a divine source.

There are fewer references to dreams in the New Testament, and there is no record of Jesus’s dreams, although the Gospels, Acts, and Revelation continue to present the experience of God-inspired dreams. The New Testament contains such dreams as Joseph’s dreams, Peter’s trance dream, the dream of the wise men, and the dream of Revelation. Some of the more significant dreams of the New Testament are found in St. Matthew’s gospel, which reports the announcement of Christ’s conception, an event revealed directly to Joseph while he is awake: “Behold, the angel of the Lord appeared unto him in a dream, saying, Joseph, thou son of David, fear not to take unto thee Mary thy wife: for that which is conceived in her is of the Holy Ghost” (Matt. 1:20). The flight into Egypt is connected to three dreams: the dream of the wise men, who are warned not to return to Herod; the dream in which an angel tells the Holy Family to go into Egypt to escape Herod; and, after Herod’s death, the dream in which an angel again appears to Joseph in Egypt, telling him to return to the land of Israel.

One of the most curious dreams in the New Testament is that of the wife of Pontius Pilate, who urges her husband to release Jesus, rather than Barabbas, “for I have suffered many things this day in a dream because of him” (Matt. 27:19). Biblical dreams are almost all fulfilled, but in this case the advice in the dream is not followed, and Jesus is crucified. This event presents a fragment of an older tradition that can be found in the early Coptic church in which both Moses and Jesus were seen as powerful magicians. Thus, in the noncanonical Gospel of Nicodemus, the Jewish priests actually tell Pilate that Jesus is a conjurer, and with respect to Pilate’s wife’s dream warning, the chief priests reply: “Did we not say unto thee, he is a magician? Behold, he hath caused thy wife to dream.”