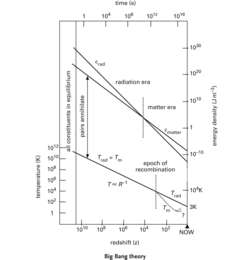 A cosmological model in which all matter and radiation in the Universe originated in an explosion at a finite time in the past. This theory has been remarkably successful in explaining the expansion of the Universe, the microwave background radiation, and the cosmic abundance of helium. An evolving Universe was first discussed in the 1920s by Aleksandr Friedmann, Georges Lemaître, and others. A hot Big Bang, in which the temperature of matter and radiation decreased with time, was suggested by George Gamow in the 1940s in an attempt to explain the observed abundances of the elements by cosmological nucleosynthesis. A neglected prediction of primeval-fireball radiation from the hot early phases following the Big Bang was verified by the discovery of the cosmic microwave background in 1965.

The Universe came into existence some 10 to 20 thousand million years ago (see age of the Universe) and has since been expanding and cooling from an initial state of extreme density and temperature. The uncertainty principle of quantum mechanics prevents our speculating on times shorter than 10–43 seconds after the Big Bang; this is known as the Planck time. Current theories of elementary particles allow some calculation of the conditions from 10–35 seconds onward. At this time the Universe would have contained roughly equal amounts of matter and antimatter in the form of particles and their corresponding antiparticles: electrons and positrons; neutrinos and antineutrinos; quarks and antiquarks (quarks are the particles that make up protons and neutrons). The asymmetrical decay of hypothetical particles (called X-bosons) at this time into matter rather than antimatter may explain why the Universe is today apparently composed entirely of matter. The time from 10–35 to 10–24 seconds may have been the critical period of a sudden and enormous expansion of the Universe, according to the inflationary Universe theory.

The Universe cooled as it expanded with age, and the fall in temperature governed which particle reactions dominated at which era. During the quark era quarks and antiquarks had almost completely annihilated (see annihilation). The remaining small excess of quarks over antiquarks (by 1 in 109) then combined to form ordinary hadronic matter such as protons and neutrons during the quark-hadron phase transition. Conditions suitable for the interaction and self-annihilation of hadrons existed only for the first millisecond, in the hadron era. This was followed by the self-annihilation of the less abundant lighter elementary particles – leptons – in the lepton era until the Universe was about 100 seconds old. The photons of radiation produced by the matter-antimatter annihilation in these early epochs fueled the primeval fireball and dominated the energy density (i.e. energy per unit volume) of the early Universe. This was the radiation era.

Radiation loses energy in the expansion – by the cosmological redshift – and together with the decrease in photon number density this causes the radiation energy density, ∊rad, to vary with the cosmic scale factor, R, as R –4. The matter density, ∊matter, decreases less slowly, as R –3, and thus dominated the total energy density after about 10 000 years, when the temperature was about 10 000 K. This marked the beginning of the matter era. The matter was composed primarily of an ionized gas of electrons, protons, and helium nuclei. At about 3000 K electrons can recombine with protons to form neutral hydrogen. Prior to that epoch the scattering of photons on the electrons coupled matter and radiation so that they shared a common temperature. The possibility of recombination marked the beginning of the decoupling era some 300 000 years after the Big Bang, when the photons of radiation separated from the expanding matter and radiation could propagate freely in the Universe. Since recombination the radiation has cooled from about 3000 K down to the observed 3 K of the microwave background at a rate proportional to R. The matter, no longer coupled to the radiation, has interacted to form stars and galaxies (see galaxies, formation and evolution).

Deuterium and helium were synthesized in the dense hot phase at about 100 seconds after the Big Bang when the temperature was about 109 kelvin: primordial neutrons combined with protons to form deuterium before the neutrons, with a half-life of 11 minutes, were able to decay. The deuterium nuclei then combined to give helium. Most of the helium in the Universe today was formed at this time. The lack of any stable nuclei with atomic numbers of 5 and 8 prevented formation of heavier elements, except lithium. (The heavier elements are generated by nuclear reactions in the stars – see nucleosynthesis.) Calculations yield estimates of approximately 25–30% by mass for the helium abundance if an expansion rate consistent with observations is used.

[¦big ′baŋ ‚thē·ə·rē]
(astronomy)
A theory of the origin and evolution of the universe which holds that approximately 1.4 × 1010 years ago all the matter in the universe was packed into a small agglomeration of extremely high density and temperature which exploded, sending matter in all directions and giving rise to the expanding universe. Also known as superdense theory.
McGraw-Hill Dictionary of Scientific & Technical Terms, 6E, Copyright © 2003 by The McGraw-Hill Companies, Inc.

Feedback
Flashcards & Bookmarks ?
Please log in or register to use Flashcards and Bookmarks. You can also log in with
Flashcards ?
My bookmarks ?
+ Add current page to bookmarks
Mentioned in ?
References in periodicals archive ?
The Big Bang fairs around the country connect young people to the employers they could be involved with in the future."
Engineering a future in science; As the economy shifts back towards design and manufacturing industries one North university welcomes the next generation of innovators. RUTH LOGNONNE reports
"We're also keen to encourage schools to be part of the celebrations by running their own Big Bang @School events to help promote the careers that science and maths subjects can lead to."
Making a big bang for science
A couple of years later that article prompted a question from a mother in Pennsylvania whose 11-year-old son was working on a project about the Big Bang: Is the sound of the Big Bang actually recorded anywhere?
Big Bang's sound recreated in HD
Sandara, who was formerly a member of Star Magic in the Philippines, moved to Korea in 2007 and joined the girl group 2NE1 under YG Entertainment, the same entertainment company as Big Bang's.
Having a blast
I turned back to the Big Bang Channel and listened to the universe speak.
Channeling the big bang: before scientists even measured energy from the Big Bang, people could watch it at home every night
The Big Bang seems to have occurred under conditions of extremely high density; similar conditions occur throughout our universe - in black holes.
Is God in the details?
Galecki also said that it was their "chemistry" that resulted in "Big Bang Theory's" success.
'Big Bang Theory' Co-Creator Dishes On Season 12 Finale Episode
"We, along with the cast, writers and crew, are extremely appreciative of the show's success and aim to deliver a final season, and series finale, that will bring 'The Big Bang Theory' to an epic creative close."
Next season of 'Big Bang Theory' to be its last
Last year Emily O'Reagan, from Sheriff Hill, spent time with a captive group of the endangered birds at the Washington Wetlands Centre before presenting it at the national Big Bang fair in London.
Youngsters learn the appliance of science
The famous Professor of Physics says: "It's great to be back with The Big Bang Fair.
In search of the scientists of the future; THEDAILYPREVIEW THE BIG BANK FAIR EXCEL LONDON
With management of Big Bang Bail Bonds coming from a high service-oriented background, Big Bang Bail Bonds will translate that customer service knowledge and apply it to the bail bonds industry.
Big Bang Bail Bonds Opens in Las Vegas, Nevada
The inaugural UK Young Scientists and Engineers Fair, the Big Bang, took place from 4 to 6 March at the QEII Centre in London.
London hosts Big Bang event