Considering the huge advancements in surveillance technology since the book was written, Big Brother is becoming more fact than fiction throughout the world. See Big Mother.
Copyright © 1981-2019 by The Computer Language Company Inc. All Rights reserved. THIS DEFINITION IS FOR PERSONAL USE ONLY. All other reproduction is strictly prohibited without permission from the publisher.
The following article is from Conspiracies and Secret Societies. It is a summary of a conspiracy theory, not a statement of fact. 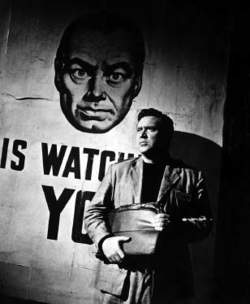 Feedback
Flashcards & Bookmarks ?
Please log in or register to use Flashcards and Bookmarks. You can also log in with
Flashcards ?
My bookmarks ?
+ Add current page to bookmarks
Mentioned in ?
References in periodicals archive ?
AHMED Aghil: You are 44 years old and,as a result, really should know better (BigBrother 5,Channel 4,last night).
Paddy Shennan: Welcome to Big Brother's asylum for social misfits
While stressing it was not advocating a parliament hot tub, the charity argued MPs and p oliticaljunkies needed to stop looking down their noses at BigBrother viewers.
Scott bookies' favourite after Big Brother eviction
Yesterday,Scott's parents, who live in Rhyl, refused to comment about Scott's BigBrother adventure.
Big Brother Scott has the write stuff; `Scouser'is so brainy, say his friends
PeopleHOTlinks s.marshall@people.co.uk For details on Big Brother: www.channel4/.co.uk/ bigbrother.
CRACKING UP; TV Big Brother's Nasty Nick asks to see a shrink
BigBrother hotline draws the viewers - to Davina's house
Best of this week's TV
Perhaps the powers-that-be will now do us all a favour by turning the tables -and telling the house mates in this year's BigBrother 5 that they will only have a chance of winning the show's pounds 70,000 prize if they remain asleep for the entire nine weeks.
Paddy Shennan column: Just like watching paint dry
More recently, a replica of another Jacobsen classic-- his Egg chair - was chosen for contestants to sit in and revealallin the interview room of the first series of TV's BigBrother.
Go Scandinavian for a perfect Finnish; looks at all things Scandinavian for the home
OUT OF AFRICA: Gae,pictured in the Big Brother Africa house, spiced things up in Britain after his dramatic swop with Cameron,but went back home yesterday; INSIDE OUT: The eviction of Jon,left, was a shock but Scouser Scott can still win television's BigBrother show
PIG BROTHER TANIA WILL GETTHE CHOP; FORMER Big Brother house mate Adele Roberts tells PADDY SHENNAN why she's tipping Tania to be evicted tonight
Unlike some of the other housemates, Duffy didn't do his solo ambitions any harm when he agreed to take part in last year's Celebrity BigBrother. His no nonsense attitude and sense of humour made him popular with his fellow housemates and TV viewers alike.
: Return of The Irish rover; IT'S NOT unusual for young soap stars to launch a pop career - but former Boyzone star Keith Duffy is reversing that trend by making his first appearance in Coronation Street
You'll be able to get the first two weeks free on www.channel4.com/ bigbrother, but this is merely a teaser to get you hooked.
Amy's i: BIG BROTHER IS CHARGING YOU NETNEWS
Jordan, four, from Whiston, has cerebral palsy, is partially sighted and can't walk but his mother, Pauline, was determined for himto go the same school as his bigbrother. Pauline explained: ``The doctors said he should go to a special school but I wanted him to go to Whiston Willis and they have been wonderful there.'' Jordan has already grown out ofall the equipment he needs to keep him independent at school.
JORDAN IN PLAY APPEAL
There had been s peculation about the future of their marriage following Den-nis's appearance on Celebrity BigBrother. Then scouse funnyman, who gained a reputation for his flatulence on the show, often seemed morose and, fol-lowing his eviction, several days passed before he was reunited with his wife.
LES: `IT'S ALL OVER'