electric potentials arising in tissues and individual cells of man, animals, and plants; the most important components of the processes of excitation and inhibition. The study of bioelectric potentials is of great importance in understanding the physicochemical and physiological processes in living systems. It is also used in clinical medicine for diagnostic purposes (electrocardiography, electroencephalography, electromyography, and so on).

The initial data on the existence of bioelectric potentials (“animal electricity”) were obtained in the third quarter of the 18th century in the course of research on the nature of the “shock” produced by the electrical organs of certain fish in cases of defense or attack. The studies of the Italian physiologist and physician L. Galvani, who laid the foundation for the study of bioelectric potentials, date to the same period. A long scholarly dispute (1791–97) between Galvani and the physicist A. Volta on the nature of animal electricity culminated in two major discoveries: facts were obtained on the existence of bioelectric phenomena in living tissues, and a new principle for obtaining electric current using different kinds of metals was discovered—the voltaic cell was created. Galvani’s observations could not be properly assessed until fairly sensitive measuring instruments (galvanometers) came into use. The first such studies were carried out by the Italian physicist C. Matteucci (1837). The systematic investigation of bioelectric potentials was begun by the German physiologist E. Du Bois-Reymond (1848), who demonstrated the existence of bioelectric potentials in nerves and muscles at rest and during excitation. However, because of the inertia of the galvanometer, he was unable to record rapid oscillations of bioelectric potentials lasting a few thousandths of a second during the conduction of impulses along nerves and muscles. In 1886 the German physiologist J. Bernstein analyzed the shape of action potential. The French scientist E.-J. Marey (1875) used a capillary electrometer to record the oscillations of potentials of a beating heart. The Russian physiologist N. E. Vvedenskii (1883) used a telephone to listen to the rhythmic discharges in nerve and muscle. The Dutch physiologist W. Einthoven (1903) introduced the string galvanometer into experimental and clinical practice. This galvanometer is a high-sensitivity and quick-response instrument for recording electric currents in tissues. Russian physiologists made important contributions to the study of bioelectric potentials. V. V. Pravdich-Neminskii (1913–21) was the first to record an electroencephalogram. A. F. Samoilov (1929) investigated neuromuscular transmission of excitation, and D. S. Vorontsov (1932) discovered action potential in nerve fibers. Further progress in the study of bioelectric potentials was closely related to advances in electronics, which made it possible to use electronic amplifiers and oscillographs (developed by the American physiologistsG. Bishop, J. Erlanger, and H. S.Gasser in the 1930’s and 1940’s) in physiological experiments. The study of bioelectric potentials in single cells and fibers was made possible by the development of microelectrode technique. The use of giant nerve fibers of cephalopod mollusks, mainly the squid, is of great value in elucidating the mechanisms of generation of bioelectric potentials. The diameter of these fibers is 50–100 times greater than in vertebrates (0.5–1 mm), which permits the insertion of microelectrodes in them and makes possible the injection of various substances into the protoplasm. The study of the ionic permeability of the membrane of the giant fiber enabled the English physiologists A. Hodgkin, A. Huxley, and B. Katz (1947–52) to formulate the modern membrane theory of excitation.

Resting potential (resting membrane potential). In living cells at rest there is a difference of about 60–90 millivolts (mV)—localized on the surface membrane—between the cell contents and external solution. The inner side of the membrane is charged electronegatively with respect to the outer side (see Figure 1). Resting potential is caused by the selective 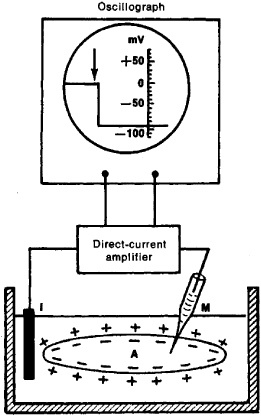 Figure 1. Diagram of measurements of resting membrane potential using an intracellular glass microelectrode (M). The second electrode (I) is placed in the fluid bathing the cell.

permeability of the resting membrane for K+ ions (J. Bernstein, 1902, 1912; A. Hodgkin and B. Katz, 1947). The concentration of K+ in protoplasm is 50 times higher than in the extracellular fluid. Hence, in diffusing from the cell, the ions carry positive charges to the outer side of the membrane. Meanwhile, the inner side, which is virtually impermeable to large organic anions, acquires negative potential. Since the permeability of a membrane at rest is approximately 100 times lower for Na+ than for K+, the diffusion of sodium from the extracellular fluid (where it is the main cation) into the protoplasm is low and only slightly decreases the resting potential produced by the K+ ions. In skeletal muscle cells, C1- ions that diffuse within the cell play an important role in the origin of resting potential. The result of the resting potential is resting current recorded between injured and intact portions of a nerve or muscle after the placement of deriving electrodes. Membranes of nerve and muscle cells (fibers) are capable of changing their ionic permeability in response to shifts in membrane potential. When the resting potential increases (hyperpolarization of the membrane), the permeability of the surface membranes for Na+ and K+ diminishes, but when it decreases (depolarization), the permeability increases. The rate of change in permeability for Na+ greatly exceeds the rate of increase in membrane permeability for K+. Figure 3. Change in sodium and potassium conductance of nerve-fiber membrane during the generation of an action potential (I). The changes in conductance are proportional to the changes in permeability for Na+(II) and k+ (III).

cell and forces K+ ions into the protoplasm. This requires an expenditure of energy drawn by the cell in the metabolic processes. 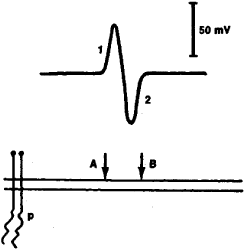 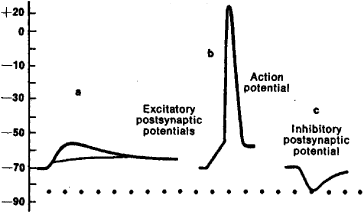 reflects local hyperpolarization of the membrane caused by an inhibitory mediator (see Figure 5, c). Unlike that of action potentials, the amplitude of postsynaptic potentials gradually increases with the amount of mediator secreted by the nerve ending. Excitatory and inhibitory postsynaptic potentials are summated in cases of simultaneous or successive arrival of nerve impulses at the endings located on the membrane of the same cell.

Generator potentials. Generator potentials originate in the membrane of sensory nerve endings (receptors). Outwardly they resemble excitatory postsynaptic potentials; their amplitude is on the order of several mV and varies with the force of stimulation applied to the receptor (see Figure 6). When 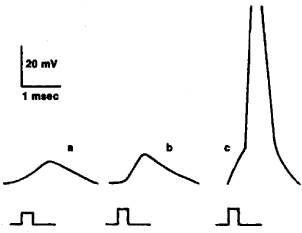 Figure 6. Generator potentials: increase in amplitude after intensified stimulation of a receptor (a-c). Upon achieving the threshold value (c), the generator potential caused an action potential in a sensory nerve fiber.

In addition to the relatively quickly developing bioelectric potentials described above, very slow oscillations of membrane potential of an unknown nature are also recorded in nerve cells, smooth muscle fibers, and some plant cells. Volleys of impulses often arise on the crest of the wave of membrane depolarization.

All bioelectric potentials can be recorded and accurately measured only with extracellular microelectrodes, which make it possible to derive the difference in potentials between the inner and outer surfaces of the cell membrane. When oscillations of bioelectric potentials are derived from whole nerves, muscles, or the brain using surface electrodes, only the total potential of the multitude of synchronously or, more often, asynchronously functioning cells is recorded. The electromyogram is the result of the interference of the action potentials of many skeletal muscle fibers. The electrocardiogram is the result of the oscillations of electric potentials of muscle fibers in different portions of the heart. The electroencephalogram is the result of the summation of mainly excitatory and inhibitory postsynaptic potentials of a great many cells in different layers of the cerebral cortex. Although the recording of such interference electrograms cannot be used to analyze the oscillations of the bioelectric potentials of individual cells, it is valuable in evaluating the state of the particular organ as a whole. In clinical medicine electromyograms, electrocardiograms, and electroencephalograms are recorded using electrodes placed on the skin of the corresponding parts of the body. The information obtained by these methods is evaluated by comparing the changes in the corresponding curve with the results of clinical, physiological, and pathological-anatomical studies.

Feedback
Flashcards & Bookmarks ?
Please log in or register to use Flashcards and Bookmarks. You can also log in with
Flashcards ?
My bookmarks ?
+ Add current page to bookmarks
Mentioned in ?
References in periodicals archive ?
The purpose of signal averaging is to improve the signal to noise ratio to facilitate the detection of low amplitude bioelectric potentials. Signals may be averaged by temporal or spatial techniques.
VENTRICULAR LATE POTENTIALS IN PATIENTS WITH MITRAL VALVE PROLAPSE
Bioelectric potentials arc generated by a variety of biological processes.
Cytomimic technology
Surface direct current bioelectric potentials in the normal and injured human thigh.
Effect of anodal and cathodal microamperage direct current electrical stimulation on injury potential and wound size in guinea pigs
(10) Bioelectric potentials are currents produced by or occurring within living organisms.
Jagadish Chandra Bose and Plant Autographs
In the physiological environment, bioelectric potentials are carried in electrolyte media in the form of ionic current and the purpose of the neural electrode is to transduce these bioelectric signals into electrical signals [9], Conducting polymers can pass electronic as well as ionic charges thanks to their molecular structure and have become promising candidate materials for the modification of electrode surface [10, 11].
Nitrogen-Doped Graphene Combined With Bioactive Conducting Polymer: An Ideal Platform for Neural Interface
Materials and Method: A total of 30 hypothyroid patients of both sexes underwent polysomnography to assess sleep based on bioelectric potentials - electroencephalogram, electromyogram, and electrooculogram.
Comparison of sleep in hypothyroid patients with normal controls
We palpated the patient's quadriceps muscles (vastus medialis, rectus femoris, and vastus lateralis) and attached electrodes to each muscle to detect the bioelectric potentials of the long axes along the belly of each muscle.
This result suggests that this improvement resulted from the facilitation of the muscular and neural functions of the quadriceps by HAL-SJ, which allowed the knee to extend fully because of the presence of a bioelectric potential in the quadriceps and the degree of feedback strength.
Caption: FIGURE 4: Bioelectric potential detection and simulation before single- joint hybrid assistive limb training.
Knee-Extension Training with a Single-Joint Hybrid Assistive Limb during the Early Postoperative Period after Total Knee Arthroplasty in a Patient with Osteoarthritis