an interrelated complex of living and inert components associated with each other by material and energy exchange; one of the most complex systems in nature. Among the living components of the biogeocenosis are autotrophic organisms (photosynthesizing green plants and chemosynthesizing microorganisms) and heterotrophic organisms (animals, fungi, many bacteria, and viruses), and among the inert components are the atmosphere layer around the earth, with its gas and thermal resources and solar energy; and the soil, with its water and mineral resources and, in part, the weathering crust (water in the case of an aquatic biogeocenosis). Each biogeocenosis maintains both a uniformity (homogeneous, or more often mosaically homogeneous) of the composition and structure of its components and the character of the material and energy exchange between them. The higher and lower green plants, which provide the basic mass of living matter, play a particularly important role in biogeocenoses. They produce the primary organic materials—the matter and energy that are used by the plants themselves and are transmitted along food chains to all heterotrophic organisms. Through the processes of photosynthesis and respiration, green plants maintain the balance of oxygen and carbon dioxide in the air; they participate in the circulation of water through transpiration. The death of organisms or their parts results in a biogenic migration and redistribution of food elements in the soil (N, P, K, Ca, and others). Finally, green plants directly or indirectly determine the composition and spatial location of animals and microorganisms in the biogeocenosis. The role of chemotrophic microorganisms in the biogeocenosis is less significant. In terms of the specific features of their activities, heterotrophs in a biogeocenosis can be divided into consumers, which transform and partially break down the organic matter of living organisms, and decomposers or destroyers (fungi, bacteria), which decompose compound organic substances in dead organisms or their parts to simple mineral compounds. In all conversions the initially accumulated energy is lost and is dispersed in the form of heat in the surrounding space. In the functioning of a biogeocenosis, a great role is played by soil organisms such as saprophages, which feed on the organic remains of dead plants; and also soil microorganisms (fungi and bacteria), which decompose and mineralize these remains. To a significant degree, the structure of the soil, the formation of humus, the content of nitrogen in the soil, the conversion of a number of mineral substances, and many other soil properties depend upon their activity. Without the heterotrophs, the completion of the biological circulation of matter, the existence of autotrophs, and the biogeocenosis itself would not be possible. The inert components of the biogeocenosis serve as a source of energy and primary materials (gases, water, and minerals). The material and energy exchange between the components of the biogeocenosis is shown on the diagram of the biogeocenosis (according to A. A. Molchanov; the influx and consumption of energy are expressed in kilocalories per hectare).

The transition from one biogeocenotic process to another in space or time is accompanied by a change in the states and properties of all its components, and consequently by a change in the nature of biogeocenotic metabolism. The boundaries of a biogeocenosis can be traced from many of its components, but more often they coincide with the boundaries of the plant communities (phytocenoses). The mass of the biogeocenosis is not homogeneous either in terms of composition or the state of its components or in terms of the conditions and results of their biogeocenotic activity. This mass is differentiated into the aboveground, underground, and underwater parts which in turn are divided into elementary vertical structures—biogeohorizons, which are very specific in terms of composition, structure, and the state of the living and inert components. The concept of biogeocenotic parcels has been introduced to designate the horizontal heterogeneity or mosaic quality of a biogeocenosis. Like the biogeocenosis as a whole, this concept is a comprehensive one, since the vegetation, animals, microorganisms, soil, and atmosphere constitute the parcel in the capacity of participants in the exchange of matter and energy.

The concept of a biogeocenosis was introduced by V. N. Sukachev (1940). This was the logical development of the ideas of the Russian scientists V. V. Dokuchaev, G. F. Morozov, G. N. Vysotskii, and others concerning the relationships of living and inert bodies of nature, as well as the ideas of V. I. Vernadskii concerning the planetary role of 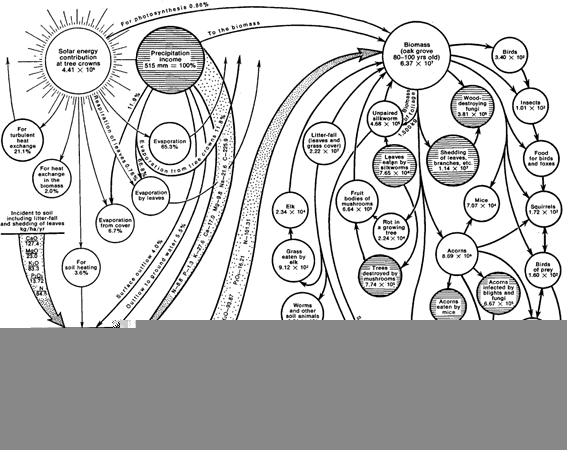 Figure 1. Diagram of a biogeocenosis

living organisms. According to V. N. Sukachev, a biogeocenosis is close to the ecosystem of the English phytocenologist A. Tansley but differs by the definition of its content. A biogeocenosis is an elementary unit of the biogeosphere envisaged within the limits of specific plant communities, whereas an ecosystem is a dimensionless concept and can encompass a space of any extent, from a drop of pond water to the biosphere as a whole.

The term “facies” is also used by physical geographers in a sense close to that of a biogeocenosis.

Feedback
Flashcards & Bookmarks ?
Please log in or register to use Flashcards and Bookmarks. You can also log in with
Flashcards ?
My bookmarks ?
+ Add current page to bookmarks
Mentioned in ?
References in periodicals archive ?
Gradual replacement of the biogeocenosis over time should lead to the accumulation of dead biomass that promotes an increase in the content of light fractions, which are the most sensitive to changes in environmental conditions pool of soil organic matter.
DYNAMICS OF ORGANIC MATTER IN SOILS FOLLOWING A CHANGE IN LANDUSE ON PERMO-CARBONIFEROUS ROCKS IN THE CESKY BROD AREA (CZECH REPUBLIC)
Proceedings of the International Conference: Study of Fungi in Biogeocenosis, Perm, pp.
Status of rare and endangered species of lichen populations in the Perm Territory
In flood lands of middle Lena valley the greatest density of earthworms is characteristic for biogeocenosis of central flood land.
Burrowing earthworms inhabiting flood land biogeocenosis of cryosolic alluvial soils are characterized by capability of using all soil profile from litter to pedogenic rock.
In flood lands' biogeocenosis these are light mechanical composition of near river bed soils, overwettting in near terrain soils as well as salification processes in some parts of central flood land.
So it is difficult to reveal strict fidelity of earthworms to a certain type of biogeocenosis if it exists.
In the long term obtained materials may be used as biological indicator for evaluation of the level of anthropogenic load on biogeocenosis as in organization of ecological monitoring.
Lumbricoid fauna of cryosolic soils of Yakutia
Soil as a component of forest biogeocenosis. In Osnovy lesnoj biogeotsenologii [Fundamentals of Forest Biogeocenology], pp.
Humus cover and its fabric depending on pedoecological conditions and land use: an Estonian approach to classification of humus forms/ Huumuskate ja selle ulesehitus soltuvalt pedookoloogilistest tingimustest ning maakasutusest: huumusvormide klassifikatsiooni Eesti versioon
Esta disciplina comenzo a estructurarse a partir de la relacion de los valores numericos del clima (temperatura y precipitacion) con los areales de las plantas y las formaciones vegetales, para anadir mas adelante informacion de las biogeocenosis y conocimientos procedentes de la fitosociologia dinamico-catenal, es decir, de las series, geoseries y geopermaseries de vegetacion.
Pisos de vegetacion de la sierra de catorce y territorios circundantes (San Luis Potosi, Mexico)
The positive correlation between coconut palm height and viable triatomine eggs found in this study, suggests that both palm microclimate (temperature, ventilation and humidity) and vertebrate colonization are important for vector biogeocenosis.
Commercial coconut palm as an ecotope of Chagas disease vectors in north-eastern Venezuela
As happens so often in science, at almost the same time as Lindeman published his ideas, Russian ecologist Vladimir Nikolayevich Sukachev (1880-1967) proposed the concept of biogeocenosis, which is very similar to the idea of the ecosystem.
The biosphere: humanity's home