Birds of Prey | Article about Birds of Prey by The Free Dictionary
https://encyclopedia2.thefreedictionary.com/Birds+of+Prey
Printer Friendly 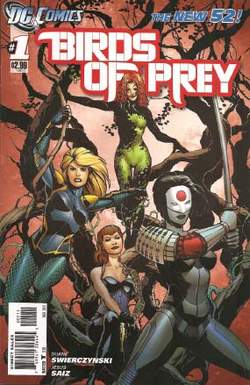 Even with a dozen or so costumed vigilantes prowling over its rooftops, Gotham City is filled with crime. Most of the heroes have had interaction with Batman, and some have even been his protégés. One such heroine was Barbara Gordon, whose career as Batgirl put many criminals behind bars. After the Joker shot her, a paraplegic Gordon refused to sink into self-pity, or accept that her crime-fighting career was over. Using money from Wayne Enterprises and other sources, the now wheelchair-bound Gordon established a base of operations in the Clocktower high above Gotham. There, utilizing an astonishing array of computers and electronics, Gordon became Oracle, an information broker who uses her databases and contacts to fight crime—not only in Gotham, but worldwide.

As leader of a rotating-membership superhero mini-group called Birds of Prey, Gordon first utilized Power Girl as an operative, but that relationship was disastrously short-lived. Oracle examined the other female superheroines whom she knew and settled upon Dinah Lance, the second-generation crime fighter known as the Black Canary. The daughter of the original Black Canary, Lance not only has consummate detective and martial arts skills, she also has a metagenetic ability to use a sonic “Canary Cry” to topple opponents and doorways alike.

Oracle has used other operatives as part of her Birds of Prey, allying herself with the mysterious crossbow-wielding Huntress, and even an occasional male hero, such as the Blue Beetle. Although Black Canary is also involved with the Justice Society of America, she prefers to work as one of Oracle’s operatives. And for Barbara Gordon, the good she does as Oracle—helping Batman, Nightwing, the Justice League, or the Birds of Prey—balances out the mobility she lost to Gotham’s craziest criminal.

Gordon first appeared as Oracle in Suicide Squad #29 (January 1989), her new persona the re-creation of writer John Ostrander. The Birds of Prey concept began as a series of one-shots and miniseries in 1996, and included appearances in Showcase and Green Arrow. The concept proved popular enough that a regular Birds of Prey series began in January 1999.

Although a Birds of Prey television series was introduced in 2002, all the characters had made appearances in television and film prior to this. Batgirl was featured in the 1960s Batman television series and the 1997 feature film Batman & Robin, as well as a number of animated TV series and films from the 1960s onward. Black Canary and Huntress both made a pair of television appearances in Hanna-Barbera’s two Legends of the Super-Heroes primetime specials on NBC (airing February 3 and 10, 1977). These campy stories had a collection of superheroes interacting with supervillains in “The Challenge” and “The Roast.” Black Canary was played by the one-named Danuta (Rylko-Soderman, later a television evangelist), while Huntress was played by Barbara Joyce.

On October 9, 2002, the WB network debuted a highly advertised, new live-action series called Birds of Prey, based loosely on the DC comic book. The narration at the show’s beginning established the characters as a trio of heroines: Helena Kyle, a.k.a. Huntress (Ashley Scott), was the half-metahuman daughter of Batman and Catwoman; the former Batgirl Barbara Gordon, a.k.a. Oracle (Dina Meyer), was the wheelchair-bound computer genius; and Dinah Redmond (Rachel Skarsten) was the runaway metahuman daughter of the original Black Canary. Headquartered in the Clocktower, the trio protected New Gotham from villains of all sorts.

The series mixed a lot of concepts from the comics, including the original version of Huntress (the Batman’s daughter concept that had been written out of continuity), and guest appearances by the Joker (only briefly), Harley Quinn, Lady Shiva, Clayface, and the original Black Canary. Barbara Gordon even donned her Batgirl suit a few times. Despite its high action quotient and Batman-esque promos, Birds of Prey only lasted for thirteen episodes, and the two-part finale aired on February 19, 2003.

Although writer Jordan B. Gorfinkel conceived Birds of Prey and Chuck Dixon originally wrote it, Gail Simone is the writer perhaps most associated with the series. In her initial run she added the Huntress and Lady Blackhawk to the team’s core membership. After she left the series it was canceled, in 2009. However, Birds of Prey returned in 2010, again written by Simone, who added the Hawk and the Dove to the team. A new Birds of Prey series began in September 2011, written by novelist Duane Swiercyznski and drawn by Jesus Saiz. —AM & PS

Feedback
Flashcards & Bookmarks ?
Please log in or register to use Flashcards and Bookmarks. You can also log in with
Flashcards ?
My bookmarks ?
+ Add current page to bookmarks
Mentioned in ?
References in periodicals archive ?
Pesticides and insecticides used in agriculture also cause death of birds of prey," said Dr Salim Javed, manager of terrestrial assessment and conservation at EAD.
Food security at stake as birds of prey die out
Dr Sean Christian Head of Conservation at RSPB Cymru said: "It has been illegal to poison birds of prey since 1911.
Ban poisons to protect our birds of prey; PLEA AS FIGURES REVEAL CRUEL PRACTICE CONTINUES
Birds of prey are longer living than other birds and breed more slowly so when they are killed, populations cannot breed fast enough to make up numbers.
Law must be enforced to protect birds of prey
Stuart Housden, of RSPB Scotland, said: "The laws protecting birds of prey must be properly enforced to stamp out illegal killing."
Birds of prey plea
He presented several birds of prey, including owls, falcons and a bald eagle, to the 175 people who attended the barbecue.
Seniors experience a day for the birds; Barbecue, animal exhibit ring in fall season
Many birds of prey have been re-introduced after threat of extinction.
The race is on to protect pigeons
In 2014, RSPB Cymru received 23 reported incidents of shootings, trappings or poisonings of birds of prey, including the confirmed shooting of a buzzard and the poisoning of a peregrine falcon, a red kite and a buzzard.
RSPB urges better use of law to stop bird persecution
The event was organised by the Canal and River Trust with Thirsk Birds of Prey Centre giving the demonstrations.
Close-up on birds of prey at Marsden visitor centre
Birdcrime 2012 reveals nationally 208 reports of the shooting and destruction of birds of prey including the confirmed shooting of 15 buzzards, five sparrowhawks and four peregrine falcons.
Birds of prey fall victim to crime
Birds section leader Kellie Piper said: "Birds of prey get unfit very quickly when they are moulting.
Rats learning the ropes; Creature featuresOUR FRIENDS AT DUDLEY ZOO BRING THE LATEST NEWS
Sian Pirone, from the hotel, said: "This event on Easter Sunday will look at the role birds of prey played in Shakespeare's plays such as Othello, The Taming of the Shrew and Macbeth."
Falcons drop in at Stratford hotel
Birds of prey from Durham falconry were also on show and customers were treated to flying demonstration from the birds.
Youngsters get crafty to give birds a home