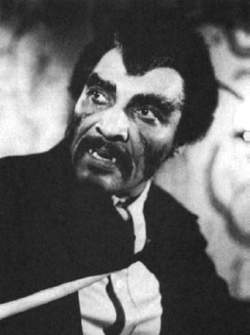 Shakespearean actor William Marshall in his most famous role as Blacula.

Bistritz (or Bistrita) is a town of some 35,000 inhabitants located in northeastern Transylvania in present-day Romania. It entered into the world of vampires as the first location visited by Jonathan Harker, in Bram Stoker‘s novel, Dracula. It is only 50 miles from Borgo Pass where Harker was met by the carriage that took him to Castle Dracula. Bistritz was an old German settlement and the tower of the German Church found there is still the highest in all of Romania. Harker’s account mentions a series of fires between 1836 and 1850 that destroyed much of the old town. In Stoker’s day, the town had approximately 12,000 residents.

While there Harker stayed at the Golden Krone (Crown) Hotel. Unlike the very real Bistritz, the Golden Krone is a complete fiction, or at least it was. In 1974, in order to take advantage of the tourists interested in Dracula, a Golden Krone Hotel was opened, and the meal Harker ate while at the hotel was placed on the menu. Robber steak consisted of bits of bacon, onion, and beef roasted on an open fire together with red pepper on a stick. It was served with Mediasch wine. Today a tourist at the Golden Krone can also dine on “Elixir Dracula,” (a red liquor made from plums), stuffed cabbage Birgau, Dracula cakes, and Dracula red wine. The hotel also sells a line of Dracula paraphernalia and souvenirs.

Bite Me in the Coffin Not in the Closet Fan Club see: Vampire Fandom: United States

Feedback
Flashcards & Bookmarks ?
Please log in or register to use Flashcards and Bookmarks. You can also log in with
Flashcards ?
My bookmarks ?
+ Add current page to bookmarks
Mentioned in ?
References in classic literature ?
Bistritz.-- Left Munich at 8:35 P.M., on 1st May, arriving at Vienna early next morning; should have arrived at 6:46, but train was an hour late.
I was not able to light on any map or work giving the exact locality of the Castle Dracula, as there are no maps of this country as yet to compare with our own Ordance Survey Maps; but I found that Bistritz, the post town named by Count Dracula, is a fairly well-known place.
It was on the dark side of twilight when we got to Bistritz, which is a very interesting old place.
View in context
Bistritz. Left Munich at 8:35pm - the first words of famous gothic novel Dracula.
End of a war, the creation of a classic and birth of a screen icon; THE FACT MASTER KNOWS WHAT HAPPENED AND WHEN
ThucNhi Tran Dang, Clarence Wong, and Lana Bistritz
Gastroenterology Curriculum in the Canadian Medical School System
Bistritz, "Enhancement of connected words in an extremely noisy environment," IEEE Transactions on Speech and Audio Processing, vol.
Analyzing Network Protocols of Application Layer Using Hidden Semi-Markov Model
H.; Schmidt, M.; Murtha, A.; Bistritz, A.; Sander, J.; Greiner, R.
A vector machine based approach towards object oriented classification of remotely sensed imagery
In patients with diabetes who undergo CABG, for example, risk of death increases by 17% for every 1 mmol/L (18 mg/dL) increase in average glucose level above 6 mmol/L (108 mg/dl) (McAlister, Man, Bistritz, Amad, & Tandon, 2003).
Optimizing the treatment of type 2 diabetes using current and future insulin technologies
As if to emphasize the patriotic nature of his ultimate task, Stoker has Jonathan depart from Bistritz for Dracula's castle on the eve of St George's day.
View in context
Berger, D.K., Kyman, W., Perez, G., Menendez, M., Bistritz, J.F., & Goon, J.M.
Perceptions of pregnant/parenting teens: reframing issues for an integrated approach to pregnancy problems