One of the five classes in the phylum Mollusca, sometimes known as Pelecypoda. All bivalves are aquatic, living at all depths of the sea and in brackish and fresh waters. With about 25,000 living species, Bivalvia is second to class Gastropoda (over 74,000) in molluscan species diversity. However, the total biomass of bivalves is much greater, and certain bivalve species are numerically dominant in many benthic ecosystems. The most primitive bivalves are infaunal, burrowing into soft sediments, but many families are epifaunal, attached to rocks or shells or residing on the sediment surface. Bivalves are well represented in the fossil record from the early Paleozoic because of their calcareous shells.

The shell consists of two valves with a noncalcified connecting ligament holding the valves together at a hinge plate. The shell layers consist of an outer horny periostracum (protective layer) that can be either absent or eroded in some species, a middle prismatic layer consisting of crystalline calcium carbonate, and an inner lamellar or nacreous layer. In some families such as the Mytilidae (mussels) or the Pteriidae (winged or pearl oysters), the nacreous layer can exhibit a beautiful iridescent sheen, whereas in most bivalves the inner layer is smooth but with a chalky appearance. Hinge ligament tension holds the valves in a gaping position, with valve closure effected by adductor muscles.

The ciliated molluscan gills, properly called ctenidia, are enlarged in the subclass Lamellibranchiata and occupy a substantial portion of the mantle cavity. The ctenidia consist of layered filaments which function primarily to pump water into the mantle cavity and to filter particulate food from the incurrent water stream. The ctenidia of bivalves of the subclass Protobranchia also serve to pump water, but they are smaller and less developed than in the lamellibranchs and do not serve to filter food particles. Protobranch bivalves are deposit feeders that gather food by extending thin muscular palp proboscides to probe soft sediments and entrap organic detrital particles. Bivalves of the subclass Septibranchia (sometimes called Anomalodesmata) have highly modified ctenidia that lack filaments. A septum divides the mantle cavity into dorsal and ventral chambers, and water is pumped by muscular contraction of the septum wall.

Some bivalves have a foot for locomotion. If present, the foot can be extended from the shell by blood pressure and dilated to act as an external anchor while movement is effected by contraction of retractor muscles. Some bivalves of the family Pectinidae (scallops) lack a foot but are highly active swimmers through clapping their valves and jetting water through orifices (openings) near the hinge. Some bivalves, such as oysters and giant clams, are sedentary and lack a foot as adults.

In general, bivalves are bilaterally symmetrical and laterally compressed. They have a fleshy mantle that secretes the shell enclosing the body (see illustration). The mouth is located anteriorly in bivalves; and in the Lamellibranchiata, the largest subclass, the mouth is flanked by paired labial palps that act to sort food prior to ingestion. Sensory organs are located on the outer mantle margin that has the closest contact with the environment. Frequently these sensory organs are borne on tentacles, and they are sensitive to tactile and chemical stimuli. Certain species of scallops have highly developed light-sensing organs or “eyes” on their mantle tentacles. 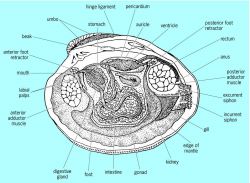 Bivalves exhibit a wide range of reproductive strategies. Most bivalves are dioecious or have separate sexes, while others exhibit various forms of hermaphrodism. For example, as mature adults, scallops carry both eggs and sperm, while oysters exhibit protandric hermaphrodism in which the oysters first develop as males and in subsequent years change sex to develop ovaries. Most species of bivalves shed eggs and sperm directly into the water, where fertilization occurs; in others, eggs may be held in a brood chamber, where they are fertilized by sperm in incurrent water, and released as well-developed larvae into the water. Most bivalves go through several planktonic stages prior to settlement and metamorphosis to their benthic form.

Many species of bivalves are actively farmed either for human consumption of the meats or for shell products. Most of the gem-quality pearls sold in the world originate from farmed pearl oysters of the genus Pinctada in Japan, Australia, and islands of the tropical Pacific. Fresh-water pearls are produced from fresh-water mussels in the United States, China, and Japan. Other species of bivalves are of economic concern by virtue of being pest organisms or biological invaders.

The fossil record of the Bivalvia can be traced to the Lower Cambrian Fordilla. The Ordovician was a major period of bivalve speciation, but throughout the Paleozoic the Bivalvia remained second to bivalves of the phylum Brachiopoda in species diversity and abundance. During the Mesozoic Era, the brachiopods declined in importance. It is probable that diverse adaptations of the Bivalvia to avoid predatory gastropods, arthropods, and fish evolving during the Mesozoic were a major factor in the replacement of the more exposed brachiopods as the dominant bivalves. The evolutionary radiation occurring during the Mesozoic includes the emergence of many species of bivalves that bore into rocks, hard corals, and wood. The Mesozoic emergent family Ostreidae, which includes oysters, remains to the present. The transition from the Mesozoic to Cenozoic began with the extinction of many ancient families and the emergence of several modern families. See Mollusca

[bī′val·vē·ə]
(invertebrate zoology)
A large class of the phylum Mollusca containing the clams, oysters, and other bivalves.
McGraw-Hill Dictionary of Scientific & Technical Terms, 6E, Copyright © 2003 by The McGraw-Hill Companies, Inc.

Feedback
Flashcards & Bookmarks ?
Please log in or register to use Flashcards and Bookmarks. You can also log in with
Flashcards ?
My bookmarks ?
+ Add current page to bookmarks
Mentioned in ?
References in periodicals archive ?
Flow cytometric comparison of haemocytes from three species of bivalve molluscs. Fish Shellfish Immunol.
IN MEMORIAM Susan E. Ford 1942-217
There are several scientific studies related to heavy metal monitoring in bivalve molluscs, which suggest that the most dangerous heavy metals to the marine ecosystem and human health are mercury, cadmium and lead due to their characteristics of toxicity, persistence and bioaccumulation (Besada et al., 2011; Astorga et al., 2006).
BIOACCUMULATION OF LEAD, CADMIUM AND MERCURY IN Argopecten purpuratus (LAMARCK, 1819) AND Aulacomya ater (MOLINA, 1782), COMMERCIAL SPECIES FROM PERU, AND RISK ASSESSMENT/BIOACUMULACION DE PLOMO, CADMIO Y MERCURIO EN Argopecten purpuratus (LAMARCK, 1819) Y Aulacomya ater (MOLINA, 1782), ESPECIES COMERCIALES DEL PERU, Y SU EVALUACION DE RIESGO A LA SALUD
Bivalve mollusc exploitation in Mediterranean coastal communities: an historical approach.
Species diversity and distribution of marine bivalves from coastal transitional ecosystem of Uran, Navi Mumbai, India
Insect larvae, crustacean, vascular plants, gastropod and bivalve molluscs undergo the largest exposure to technogenic radionuclides among all of the reference organisms (Fig.
Evaluation of exposure of Lake Druksiai biota reference organisms using probabilistic methods/ Druksiu ezero biotos testiniu organizmu apsvitos vertinimas taikant tikimybinius metodus
In a memorandum it explained that should EU ministers back the move, "Greenland can trade these commodities with the Union [as if they were produced within the EU] provided that Greenland transposes EU sanitary and, where appropriate, animal health rules on fishery products, live bivalve molluscs and by-products derived from these sources." The deal would also cover echinoderms (such as sea urchins and sea cucumbers), tunicates (for instance sea squirts) and marine gastropods (these include whelks, winkles and abalone).
Greenland to secure fish export health deal with EU
A comparison of morphometric, biochemical and physiological indexes of condition in marine bivalve molluscs, p.
Effects of heavy metals on the oyster (Crassostrea virginica) at Mandinga Lagoon, Veracruz, Mexico
Bivalve molluscs are typically shown with the hinge or dorsal end facing up out of convention.
Shell Games?
Scallops come in a fan-shaped shell and are bivalve molluscs, which means they have two-hinged shells like a mussel.
Be shellfish for a sizzling starter; food
The gonadal analysis of bivalve molluscs in an essential tool to understand the reproductive biology of the species and in the future to promote mechanisms for the preservation of these animals and their later production in a low cost subsistence food environment (Soudant et al., 1999; Gosling; Al- Mohanna, 2003).
Morphological and morphometric aspects of Crassostrea rhizophorae (Guilding, 1828) oocytes in three stages of the gonadal cycle / Aspectos morfologicos y morfometricos de oocitos de Crassostrea rhizophorae (Guilding, 1828) en tres fases del ciclo gonadal
Consumption of bivalve molluscs in Italy: estimated intake of cadmium and lead.
Adverse health effects of chronic exposure to low-level cadmium in foodstuffs and cigarette smoke
When you are buying bivalve molluscs,just make sure that they are still alive when you buy them, store them in the fridge as soon as you can and consume them within a day or two.
Fishing for glory