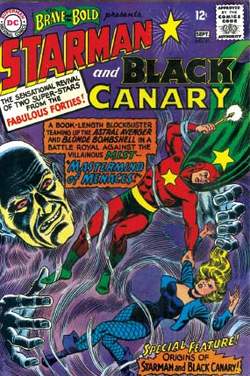 The Black Canary was the last major DC Comics superhero created in the Golden Age of comics (1938–1954), and in one form or another, she has proved to be one of the most enduring. She was introduced in the pages of Flash Comics #86, in August 1947, as a sort of villainous Robin Hood with a femme fatale twist, guesting in the Johnny Thunder strip. The Black Canary stole from criminals but kept the money herself, though Johnny—once he had got over his lovesick attraction for her—quickly persuaded her to go straight. She soon gained a solid fan following and as a result was able to repay Johnny’s devotion by taking over his slot in the comic. She also ousted him from the Justice Society of America, and became the last new member to join.

While little was initially revealed of her origins, a 1970s story described how, as a child, Dinah Drake was relentlessly trained by her police lieutenant father to be a policewoman, only to see him die of a broken heart when she was turned down by the force. Inspired by such heroes as Batman, Drake resolved that she could best serve her father’s memory by becoming a costumed crime fighter (by the time this story came out, it seems that everyone thought it best to ignore her brief fling with crime). So, dressed in dark halter-top, shorts, jacket, boots, fishnet stockings, and a blonde wig (her only element of disguise), Drake became the Black Canary. Armed only with her detective skills and martial arts knowledge, she proved to be quite a formidable character. In her civilian identity Drake ran a flower shop, but she seemed to spend just as much time fending off the amorous advances of boyfriend Larry Lance, a rather down-at-the-heels private eye. In a role reversal, and a welcome relief from the usual damsel-in-distress cliché, it was Lance who was frequently captured by villains and the Black Canary who had to rush in to save the day.

Written by Robert Kanigher and drawn by Carmine Infantino, the Black Canary strip ran for twelve installments—until Flash Comics was canceled. She also starred in twenty Justice Society tales up to 1951, when even that legendary strip went under. But when the Justice Society was brought back in the 1960s, as annual guests in The Justice League, the Black Canary was there, too, having apparently gone into semi-retirement and married Lance in the interim. Poor Lance did not last long after his wife’s second stint on the team, as an encounter with a sentient star called Aquarius (in Justice League #74) resulted in his tragic death. A heartbroken Canary promptly jumped ship to the Justice League, to avoid the sad memories of Lance that would be brought back by seeing her old Justice Society teammates, and embarked on a long career with the League. She became romantically linked with the somewhat dissolute Green Arrow, and when he joined with Green Lantern in their ground-breaking early 1970s series, she went along as well.

Green Arrow became an archetypical anti-authority radical, and Black Canary, infused with the era’s concerns, assumed advocacy of women’s lib and operated with noticeably more self-assurance. Throughout the decade, she appeared both with and without Green Arrow in stories in Adventure Comics, Action Comics, and World’s Finest Comics, as well as with the Justice League, and she became an integral part of DC’s lineup. The 1980s were a less encouraging time for her, however, as she settled down into the role of Green Arrow’s “old lady”, and a civilian life working in (once more) a flower shop. In an attempt to cash in on the vogue for grittier heroes, the Green Arrow was toughened up in a 1987 miniseries, part of which involved the Black Canary being savagely attacked, tortured, and assaulted— going from powerful superheroine to victim in one ill-judged story. The violent assault also appears to have robbed her of her one superpower, a sort of sonic cry, which had been gifted her in the early battle with Aquarius in which her husband had been killed. In time, the romance with Green Arrow soured and the couple split.

In the mid-1990s Zero Hour series, DC attempted to simplify and reinvigorate its comics line, and in a confusing bit of retrofitting, editors decided that from the moment she joined the Justice League, fans had not been reading about the Black Canary of the 1940s but her daughter! However illogical this may have been, that period did indeed see a renewed interest in the character, with a short-lived solo series and a starring role in the Birds of Prey comic. The solo series proved to be an ill-considered attempt at (yet another) gritty reinvention, as Dinah Lance was given a wretched new costume and sent to take on Seattle’s crack dealers. By contrast, in Birds of Prey Lance moved to Gotham City to join Oracle and Huntress in a far more life-affirming mixture of crime-busting and Thelma and Louise-style empowerment. A 2002 Birds of Prey TV show proved to be something of a disappointment to fans.

Feedback
Flashcards & Bookmarks ?
Please log in or register to use Flashcards and Bookmarks. You can also log in with
Flashcards ?
My bookmarks ?
+ Add current page to bookmarks
Mentioned in ?
References in periodicals archive ?
So just be friendly and do your best."--Meg Cabot, author of Black Canary: Ignite.
19 secrets every smart girl should know
Marquand is on the gory post-apocalyptic series 'The Walking Dead', Iwan Rheon is on 'Game of Thrones', which is infamous for its high body count and non-reluctance to slaughter its most beloved characters, and Katie Cassidy has already been killed off and reincarnated twice over as the Black Canary (and Black Siren) on 'Arrow'.
MEFCC 2019: Zachary Levi, Ross Marquand and co dazzle Dubai
However she is best known today for essaying superhero characters Black Canary and Black Siren on hit shows Arrow, The Flash , and Vixen and will be aptly making her presence felt at the upcoming Middle East Film and Comic Con to be held at Dubai World Trade Centre from April 11-13.
Katie Cassidy excited about MEFCC in Dubai
Arrow 's superhero Black Canary , Katie Cassidy will be at the Middle East Film & Comic Con (MEFCC), which will be held from April 11 to 13 at the Dubai World Trade Centre.
'Arrow' superhero Katie Cassidy to meet fans at MEFCC
Von Eeden's work includes "The Batman Annual #8," "Thriller," The Green Arrow mini-series during the 1980s and "Black Canary" in the 1990s.
Guests, games anchor Saluki Comic Con '18 Two-day event comes to the Student Center this weekend
The version entitled 'Purnell's journey' might take you from 'faux' Black Canary potatoes with chorizo via monkfish masala with pickled carrots to white chocolate delice with Yorkshire rhubarb and meringue, while '10 years in the making' features the likes of '1,2,3,4,5...
These Birmingham restaurants have been named among the best in the UK; Birmingham has three restaurants in SquareMeal's top 100 UK restaurants outside London
The core members consist of Batgirl and Black Canary. The current comic book lineup also includes Huntress.
Margot Robbie stars in DC movie based on 'Birds of Prey' comics
Children can take part in a treasure hunt and win free comics, have their photo taken with Captain America or Black Canary and meet some of the great cartoonists and artists who will be sketching away.
DON'T FORGET YOUR CAPE FOR COMICS SHOW
While in town, Cisco meets the Black Canary, who asks him for a favor.
TV Top 5
Is that Black Canary? Seems like a good character but I always thought her name is awful!
YOUR REVIEWS OF FILM, MUSIC AND THEATRE... tweets
Also back in the fray is Rik Mayall as detective inspector Gideon Pryke, who last appeared in an episode called The Black Canary in 2008.
WE LOVE tv; PICK OF THE DAY; YOUR GUIDE STARTS HERE