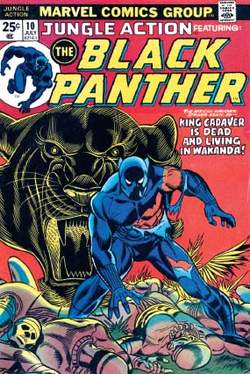 Within the course of one incredible year in the pages of Marvel Comics’ Fantastic Four, the writer/artist duo Stan Lee and Jack Kirby created characters like the Inhumans, the Silver Surfer, Galactus, and the Black Panther—comics’ first black superhero. To have debuted him in 1966 (in Fantastic Four #52) shows both bravery and prescience on Marvel’s part; to their credit, the Black Panther would go on to take a central role in their comics for years to come. The Panther was T’Challa, chief of the hidden African country of Wakanda (traditionally, in comics,, African countries are always hidden). Wakanda was depicted as a peculiar mix of high-tech machinery and mud huts, its futuristic technology being derived from “vibranium”, a metal found in a meteorite. The Black Panthers had been developed as a succession of elite guards, each in turn protecting the meteorite with the aid of sacred herbs which granted them fantastic strength and agility. T’Challa was the current inheritor of the Black Panther mantle (and all-black costume). After meeting the Fantastic Four, T’Challa decides his powers would be put to best use protecting the whole world (or at least America), and so he flies off to New York, leaving his people, and his rather impractical cape, behind.

For the next couple of years, the character flitted about from comic to comic before joining the Avengers in 1968, where he became a mainstay for the next seven years, save for the occasional jaunt back to Africa for the odd chunk of vibranium (which handily seemed to defeat most criminals). Marvel rarely made much of the Panther’s color in the 1960s, but in the more radical 1970s he acquired a forthright, liberated girlfriend, Monica Lynne, and briefly became a teacher in the ghetto, while the Avengers took on the racist Sons of the Serpent. Although it seems to have been pure coincidence, Marvel could not help but note that one of their leading characters shared his name with the radical black-power movement the Black Panthers, and briefly changed his name to the Black Leopard. One month later, however, he was back to being the Black Panther again, and in 1973 was finally granted his own strip.

“Panther’s Rage” ran for two years in the wonderfully titled Jungle Action, series written by Don McGregor and drawn for the most part by the African American artist Billy Graham. Reflecting the times’ interest in African roots and black consciousness in general, the strip returned T’Challa to a Wakanda riven by infighting and sedition, where he managed to balance superheroics with musings on colonialism and democracy. The more overtly political material was leavened by the Panther’s romance with Monica, which was surprisingly passionate for the time. For the duration of the tale, the strip featured an all-black cast, something that had never been attempted in comics before, and the innovations continued in a later story, which saw the Panther take on the Ku Klux Klan in Monica’s native Georgia.

Poor sales prompted Marvel to cancel Jungle Action before the Klan story was finished, and replace it with a new Black Panther title by his creator, Jack Kirby. This new direction was as far from the gritty realism of McGregor’s tales as it is possible to imagine, as the hero encountered the likes of King Solomon’s Frog, the Yeti, and the Black Musketeers. Not surprisingly, this title, too, was short-lived. Sporadic appearances over the next two decades kept the Panther in the Marvel firmament, but he was increasingly marginalized. Miniseries in 1988 and 1991 were solid, if unspectacular, attempts at revitalizing what was effectively a lapsed franchise. The first tackled apartheid while the second dealt with the Panther’s search for his mother, but neither led to anything substantial. With black characters no longer a comics novelty, and with role models such as the characters of Milestone Comics— which had more relevance to their readers than a wealthy African king—it seemed as if the Panther’s time had passed.

However, in 1998, out of the blue, writer Christopher Priest reintroduced the hero as part of the slightly more adult “Marvel Knights” line, in a series that was acclaimed in every venue from the fan press to Entertainment Weekly, and continued for six years—by far the character’s most successful run. For this reinvention, a now aging T’Challa returns to the urban jungle of New York armed with claws and the occasional gun, and after thirty years he once again sports a cape. In a series of hard-hitting tales, he abdicates, witnesses his daughter’s murder, and then temporarily passes on the mantle of the Panther to a young cop, Kasper Cole.

Film director Reginald Hudlin was the initial writer on both the Black Panther series that ran from 2005 to 2008, and the next one, which began in 2009. T’Challa is now wed to Storm of the X-Men, in a marriage that unites Marvel’s most prominent male and female African superheroes. —DAR & PS

Feedback
Flashcards & Bookmarks ?
Please log in or register to use Flashcards and Bookmarks. You can also log in with
Flashcards ?
My bookmarks ?
+ Add current page to bookmarks
Mentioned in ?
References in periodicals archive ?
Ron Charles of the Washington Post said that "James has spun an African fantasy as vibrant, complex and haunting as any western mythology and nobody who survives reading this book will ever forget it"; the notoriously sniffy Michiko Kakutani of the New York Times declared that "with Tracker and the Leopard, James has created two compelling and iconic characters, characters who will take their place in the pantheon of memorable and fantastical superheroes"; there was also a rave on the revered speculative fiction website Tor.com, with the reviewer, Alex Brown, getting himself into a right tizzy: "Y'all, Marlon James's Black Leopard, Red Wolf is a miracle.
Marlon James: You have to risk going too far
Black Leopard, Red Wolf is thus entirely unlike Charles Saunders's Imaro (1981) and the resulting "sword and soul" literary movement, which translated the ideological values of Howard's Conan, particularly of masculinity, into the stories of griots.
Marlon James: Black Leopard, Red Wolf
As with any monumental fantasy saga, "Black Leopard, Red Wolf" hits the required notes -- kings, queens and witches, fabulously evocative locales, deceptions and betrayal and more evil monsters than I could count.
Book review: 'Black Leopard, Red Wolf' is epic tale by Marlon James
Danny takes the blame for killing a rare black leopard and faces the possibility his career may be over.
CHOICE
Nibokan Center came first, followed by Black Leopard Center in second and Shotokan Tigers Center in third.Winners of Karting race* HRH Princess Ayah Al-Faisal presented trophies to the winners of the Karting race, which was held last Friday at the Royal Automobile Club.
Sport News
Gander needs to find himself an editor.) Examples included "the world's blackest black," an exceptionally light-absorbent chemical coating invented to improve the Hubble Space Telescope's imaging capacity; the specific blue used for Chroma-Key video effects; the black leopard's deceptive "spots" (the consequence of differences in fur length rather than color); and Black Watch military tartan.
Ryan Gander: STORE
Cyndi Gamble will show a black leopard and other exotic cats, and tell about their life histories and habitats.
SHOW and TELL
In addition, six new flavors have been added to the fruit sweetened non-dairy frozen dessert line, including Vanilla Fudge, Black Leopard, Mango Raspberry, Tiger Chai, Green Tea and Pistachio flavors.
Soy-based frozen dessert. (New Products)
A statement from the Assembly said: 'Tests at the Government's Central Science Laboratory in York found no trace of DNA from a black leopard, and electron microscopy analysis of hair found in the dog's mouth did not match those of a leopard.
Pet dog 'was not killed by a big cat'
Oscar award winner Lupita Nyong'o has waded in on the debate of the rare black leopard sighted in Kenya.
Lupita Nyong'o wades into Kenya's 'black panther' sighting debate
Michael B Jordan's Outlier Society and Warner Bros have acquired the film rights to the epic fantasy novel 'Black Leopard, Red Wolf' by Marlon James.
Michael B Jordan to adapt 'Black Leopard, Red Wolf'