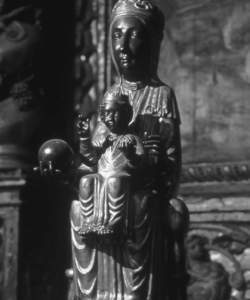 Images of the Black Madonna have existed in Europe since the Middle Ages. They may be the result of African influences, or the blending of Virgin Mary images with such Pagan gods as Isis and Artemis. Fortean Picture Library.

The term “Black Madonnas” refers to representations of the Virgin Mary with black or dark-hued skin that appeared in Europe during the Middle Ages. In several cases, these representations have reputed miraculous elements in their origin. Several of these images can be accounted for by the relatively dark skin of the indigenous population among whom the image originated (such as Our Lady of Guadalupe in Mexico) or changes in an original image that turned black because of the degradation of the paint or the accumulation of additives from the many candles burned in close proximity to it over the centuries. There are several hundred Black Madonnas across Europe, many located in southern France.

Among the most important of the Black Madonnas that appear to have been painted as such is Our Lady of Czestochowa. The original painting resides at the monastery of Jasna Gora in Poland and has gained prominence in the later twentieth century because of the attention paid to it by Pope John Paul II. It is one of several paintings attributed to Saint Luke and discovered in the fourth century by Saint Helena (c. 248–c. 329), who is said to have brought it to Constantinople. However, its history is vague until the fifteenth century, when it arrived in Poland as the possession of Saint Ladislaus. As Poland was under constant threat by Tartars, Ladislaus decided to take the image to Opala. On the journey, he stopped in Czestochowa, and while there left the Virgin in the monastery in a chapel dedicated to her assumption. When Ladislaus prepared to continue his journey, his horses refused to move forward with the Virgin’s image in his wagon. He took their reticence to move as a sign that the Virgin had found a home, and he left the painting in the brothers’ care.

A famous black statue of the Virgin is located in southern Spain at Montserrat, near Barcelona. The documentation of this statue begins in the thirteenth century, when it seems to have been enthroned in the church at Montserrat, but legends attribute its origins to Jerusalem. It is said to have been moved to Spain in the eighth century to keep it from the invading Muslims. It disappeared for a century and a half until reputedly was found by shepherds in 890. While tending their sheep in the evening, in a setting reminiscent of the biblical shepherds in Luke 2, they saw lights in the sky and heard singing. They reported it to the local priest and he to the local bishop, both of whom also saw the phenomenon. Following the lights, they found the statue in a cave. Subsequently, a chapel was built to house the statue. Again, the history becomes somewhat vague until the statue’s enthronement in its present location.

Meanwhile, a contemporary of the Spanish shepherds, Meinrad (d. 861), a holy man, lived in seclusion near Einsiedeln, Switzerland. He saw to the building of a small chapel near his residence in which he placed a small statue of the Virgin, which, like the Spanish statue, included a representation of the infant Jesus in her arms. A half century after Meinrad’s death, a church replaced the chapel. In 948, just prior to the planned dedication of the new church, some people saw Jesus appear at the location and perform a mass. The Bishop of Constance subsequently arrived for the scheduled dedication service, but he was prevented from proceeding when he heard a voice tell him the church was already consecrated.

All three of these images of Mary have accumulated miracle stories around them. Healings have been attributed to prayers addressed to Mary, and each has stories of being protected from damage to their surroundings. The church at Einsiedeln has suffered severe damage from fire on at least five occasions, but each time the chapel housing the Virgin was unaffected.

While more modern representations of the Virgin as black have been attributed to the enculturation of Catholicism, other explanations have been offered for the older, medieval images. Most commonly, they have been attributed to the continuity of images of the Virgin with that of pre-Christian Pagan deities, especially Isis and Artemis, both of whom were portrayed as dark-skinned. Anti-Catholics have used such reflections to support their belief that the Church supports idolatry, while Catholic apologists have suggested the connection was an attempt to introduce Christianity to a Pagan population. In addition, noting the preponderance of such images in France, it has also been suggested that they derive in part from the popular commentary of the Song of Solomon in the writings of Bernard of Clairvaux (c. 1090–1153). He interpreted the bride figure in this love poem as the Virgin, black and beautiful.

Feedback
Flashcards & Bookmarks ?
Please log in or register to use Flashcards and Bookmarks. You can also log in with
Flashcards ?
My bookmarks ?
+ Add current page to bookmarks
Mentioned in ?
References in periodicals archive ?
It is easy to identify Sarah as another of the many black Madonnas to be found in the world.
THE MOTHER GODDESS
The director of the library at the time, Father Roten, assigned her the task of compiling a list of the Black Madonnas of Europe.
The Ohio Marian Library of the University of Dayton
(60) Lucia Chiavola Bimbaum, Black Madonnas (Boston: Northeastern University Press, 1993), 13; China Galland, Longing for Darkness (New York: Penguin Books, 1991), xv; Fred Gustafson, The Black Madonna (Boston: Sigo Press, 1991), xiv, Fig.
Missiles of peace: Benny Bufano's message to the world
"I used pounds 10,000 of savings to buy original art plus troll beads from Denmark and spiritual items such as black Madonnas, Buddha's heads and Kabbalah bracelets.
A change for the BETTER!: TEACHER>> GALLERY OWNER
Black Madonnas: Feminism, Religion and Politics in Italy: Lincoln.
The archetypal mother: the Black Madonna in Sue Monk Kidd's The Secret Life of Bees
There are hundreds of these images of dark-skinned Black Madonnas in Europe, and they are some of the most ancient images we have of Mary.
All abuzz about the Black Madonna: an interview with Sue Monk Kidd
The Martini Henry Rifles have just finished the Sonic Mook UK tour with the Black Madonnas and are giving their time to headline Sunday's gig.
Friday sounds: Hot and cool cocktail for peace gig
The protagonists are The Black Madonnas, The Martini Henry Rifles and Dragster, with their trailer trash rock 'n' roll from Coventry.
GO: THE LIMIT: DRAGSTER REV UP THE COLLY
By her dark skin, Ezili Danto is closely aligned with other black madonnas such as Mater Salvatoris, or with madonnas with children, such as Our Lady of Mount Carmel.
Flag for Ezili Danto
Next, that Mary is a true pontifex maximus, for her symbol functions as a bridge (pons) between diverse cultures and traditions, linking Judaism and Christianity, Christianity and Islam (Maryam as the most important female figure in the Qur'an), Eastern and Latin Christianity, rich and poor, and different races (Guadalupe, the Black Madonnas).
Mary Through the Centuries: Her Place in the History of Culture
* The Black Madonnas of the early shrines of Europe may have been symbols of the hidden Mary Magdalen and her child.
The Woman with the Alabaster Jar: Mary Magdalen and the Holy Grail
The number of black Madonnas is striking--many of them blackened over time with the aging of the wood out of which they were carved.
The Madonnas of Europe. (Book Review)