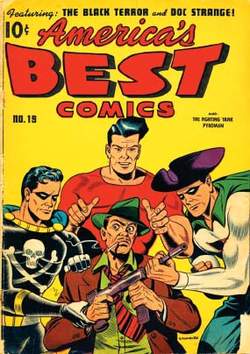 Decades before Marvel introduced the Punisher, another grim, dark-haired vigilante wore a similar black costume with a skull insignia. This was the Black Terror, “America’s fighting nemesis of crime,” who first appeared in Exciting Comics #9 (January 1941), and was created by writer Richard E. Hughes and artist Dave or Don (according to different sources) Gabrielson. The Black Terror was the most popular and famous character published by the now obscure and defunct company called Standard Comics, which included the Nedor and Better lines of comics.

The Black Terror was really pharmacist Bob Benton, who concocted chemicals he called “formic ethers,” which endowed him with superhuman strength and rendered him bulletproof. Benton used the ethers to give the same powers to his assistant and sidekick, Tim. Together they became the costumed crime fighting team known as the Terror Twins, who also battled Nazis and Japanese agents during World War II.

As his name, and his skull and crossbones insignia suggest, the Black Terror was a more violent type of superhero, who would sometimes kill his adversaries in combat. At times he was even depicted firing machine guns at his foes.

Standard continued to publish the Black Terror’s adventures until 1949; the company went out of business in 1956. But this was far from the end for the Black Terror. He and other Standard superheroes entered the public domain, and as a result numerous comics companies and creators have since done their own versions of the Black Terror, including: AC Comics, who called him the Terror, and later the Terrorist; writer Roy Thomas, in his 1986 Alter Ego comics series, who renamed him the Holy Terror; and Eclipse Comics, which published a 1989 Black Terror miniseries.

In Tom Strong #11 (January 2001), published by Wildstorm in its America’s Best Comics line, British author Alan Moore introduced Terra Obscura, an alternate Earth on which many Standard Comics heroes lived, including the Fighting Yank, Miss Masque, Pyroman, and the Woman in Red. Terra Obscura’s version of the Black Terror was killed, but had transferred his consciousness into a computer called Terror 2000.

Jim Krueger and artist Alex Ross co-plotted Project Superpowers, a series published by Dynamite Entertainment that revived numerous public domain superheroes; the first issue was cover-dated January 2008. Besides the Black Terror, Project Superpowers also included the Fighting Yank, Miss Masque (now named Masquerade), and Pyroman (from Standard); the Golden Age Daredevil, renamed the Death-Defying ‘Devil (from Lev Gleason Publications), the Green Lama (from Crestwood); the Arrow, the first superhero archer (from Centaur); the Flame, created by Will Eisner and Lou Fine (from Fox); and the android Dynamic Man (from Dynamic Publications). The Black Terror was the first Project Superpowers character to receive his own miniseries, published by Dynamite in 2008.

Another Golden Age forerunner of the Punisher (and character similar to the Black Terror) is the Destroyer, who likewise uses a skull as his chest insignia, and debuted in Mystic Comics #6 (October 1941), published by Timely Comics, the company now known as Marvel. The Destroyer was the first superhero co-created by writer Stan Lee, and was his most successful superhero co-creation before the Fantastic Four. In his origin story, American reporter Keen Marlow is imprisoned in a Nazi concentration camp, where prisoner Professor Eric Schmidt gives him a “super-soldier” serum that amplifies Marlow’s physical abilities. Schmidt is killed, but Marlow escapes and becomes the costumed Destroyer, who wages a ruthless one-man war on the Nazis behind enemy lines, to free the people they have subjugated. In his 1970s series The Invaders Roy Thomas cast two new characters, Brian Falsworth and Roger Aubrey, as the Destroyer.

Marvel re-established Marlow as the original Destroyer, starring him in the USA Comics 70th Anniversary Special (2009), in a story by John Arcudi that reveals that the stripes on the Destroyer’s costume allude to the striped uniforms worn by captives in Nazi concentration camps. —PS

Feedback
Flashcards & Bookmarks ?
Please log in or register to use Flashcards and Bookmarks. You can also log in with
Flashcards ?
My bookmarks ?
+ Add current page to bookmarks
Mentioned in ?
References in periodicals archive ?
Its rhetoric has become edgier with words such as 'terrorism' and 'black terror' now included.
Pray for Hong Kong
Modeling the presence of Black terror and Black being in such a present, In the Wake offers no introduction.
Wake Work: "A Long History and Present"
A 2004 Comic Book Hall of Fame enshrinee, Robinson (1922-2011) began work on "Batman" as an inker and letterer in 1939, when the comic was in its infancy, and is widely credited with co-creating the two iconic characters, along with "Alfred" the butler and the villain "Two-Face." He later formed a studio with Mort Meskin to work on the "Black Terror" and other characters, before exploring other cartooning genres.
"Robin," "The Joker" Co-Creator Jerry Robinson Selected for Wizard World Hall of Legends
We even had the Black Terror, who represented 'the poison to evil.'
Are today's superheroes bad role models?
The French leader, according to the statement, reiterated his country's full support with Egypt against "black terror" that has come to pose a threat to the entire world.
Al-Sisi calls for intensifying efforts
He mentioned that he has painted down on different topics such as world food crisis, black terror etc.
Mansoor Rahi counts painting as an instrument to propagate nature
The cabinet announced after an emergency meeting on Friday that all security agencies and police had been put on alert to confront what it called "black terror." Justice and Islamic Affairs Minister Yacoub Al-Sane said additional security measures will be taken around mosques and places of worship.
Kuwait mosque bomber a Saudi national, say probers
Parliament speaker Marzouk al-Ghanem described the attack as "black terror", adding that the unity of Kuwaitis would foil any plot.
IS Suicide Bomber Kills 25 at Kuwait Shiite Mosque
Just this very week, in a critical report by state security that Al-Shorouk newspaper was able to partially peruse, activists on social media were called worse than ' black terror' .
Judicial bullets and Egyptian insecurity
In Wild Boy & the Black Terror, Wild Boy and Clarissa use their unique skills of deduction and acrobatics to try to solve a mysterious rash of murders that threaten to overtake London.
Jones, Rob Lloyd. Wild Boy & the Black Terror
So when the diabolic Black Terror threatens the whole of London they call upon the pair's help in finding the culprit.
Jones, Rob Lloyd: Wild Boy and the Black Terror