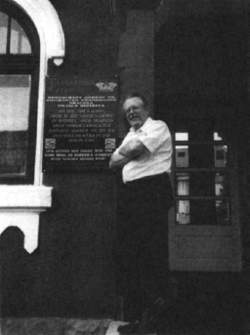 Author J. Gordon Melton in front of a restaurant at the Golden Krone Hotel in Bistritz. The sign discusses Jonathan Harker’s stop at the same restaurant in Dracula

In the late 1960s the movie industry began to generate a series of movies specifically directed toward the African-American community. While the vampire was essentially a European folk character, and there have been only a few references to vampires in Africa or in African-American lore, it was inevitable that “blaxploitation” producers would consider the possibilities of a Black vampire motion picture. In 1972 the first of the two most important African-American vampire movies, Blacula, starring William Marshall, appeared.

Blacula told the story of Prince Mamuwalde, an African leader in 1780 who was trying to find a way to stop the slave trade that haunted Africa’s west coast. He sought out Count Dracula (Charles Macaulay) to obtain his assistance in the endeavor. Dracula merely laughed at the Prince, who with his wife Luva, started to leave. Before they could get away, however, they were attacked by Dracula and his vampire cohorts. Mamuwalde was vampirized and sealed in a tomb. Luva was left to die of starvation, unable to help her husband as Dracula cursed Mamuwalde to become Blacula, his African counterpart.

The story then switches to 1965 when some Americans purchase the furnishings of Castle Dracula and ship them to Los Angeles, unaware that the ornate coffin they have obtained houses Blacula’s body. Blacula is awakened and discovers a new love, Tina, the exact image of his Luva. As the plot progresses, she falls victim to a shooting incident, and he turns her into a vampire to save her. But then she is staked to death, and in his grief Blacula commits suicide by walking into the sunlight.

Blacula was revived by the magic of voodoo a year later in a sequel, Scream Blacula Scream. In collusion with the voodoo priestess Lisa, he searches for a way to rid himself of his vampirism, but is thwarted by the police. In a novel, but entirely appropriate, twist of the storyline, he is killed by a pin stuck through the heart of a voodoo doll.

Because of the large audience of vampire movie enthusiasts, the Blacula movies have had a heightened popularity and join the list of those few blaxploitation films which found a broad audience beyond the African-American community. Blacula was awarded the Ann Radcliffe Award by the The Count Dracula Society.

Feedback
Flashcards & Bookmarks ?
Please log in or register to use Flashcards and Bookmarks. You can also log in with
Flashcards ?
My bookmarks ?
+ Add current page to bookmarks
Mentioned in ?
References in periodicals archive ?
(19) See, for example, Hubert Adjei-Kontoh, 'From Blacula to Get Out: The Documentary Examining Black Horror', The Guardian, 8 February 2019, <https://www.theguardian.com/film/20i9/feb/07/horror-noire-documentary-black-horror>, accesse 1 April 2019.
American Horror GENRE AND THE POST-RACIAL MYTH IN GET OUT: Rife with symbolism and social commentary Jordan Peele's debut feature effectively employs and subverts well-worn horror tropes, constituting a work that is as entertaining as it is politically charged As ANTHONY CAREW explores, the film functions as both a scathing satire of liberal racism and an evocation of the everyday fears that African-American people must endure
Among his best-loved works: his creepy, crayon-coloured celebration of the Chiodo Brothers cult classic Killer Klowns From Outer Space, and his in-your-face take on John Carpenter's 1978 slasher classic, Halloween, which captures the precise moment when Michael Myers bursts into the closet and starts stabbing."He's the guy I collected the most original art of," Rob Jones, Mondo's creative director, said."Over my wife's side of the bed is his Bride of Frankenstein, and over my side of the bed is Blacula." We Buy Your Kids, Sydney We Buy Your Kids is the Australian design duo of Sonny Day and Biddy Maroney, whose work has appeared on children's books and album covers, premium cider labels and skate decks.
Alternative movie posters: fan art we love
Vampire Films of the 1970s: Dracula to Blacula and Every Fang Between
Vampire Films of the 1970s: Dracula to Blacula and Every Fang Between
Blacula and APSalem's Lot, Roots and Rosemary's Baby.
Horror Movies with Mom
The playwrights, for instance, have to set their shows in a bar, even if they write about Blacula coming through a second-story window.
Where everybody knows your name: many actors pay the bills with jobs at watering holes, but our bar gives them opportunities to perform at a pub while between shows
White Blacula is a band that's great fun live and I always love to watch Mugstar.
Faded Gold goes with Tides
The volume gathers revealing (and previously unavailable) interviews conducted by Manchel, dating from the 1970s with African-American film luminaries Mae Mercer, Brock Peters, Jim Brown, Ivan Dixon, James Whitmore, William Marshall (Blacula), and Ruby Dee.
Exits and Entrances: Interviews with Seven Who Reshaped African-American Images in Movies
During the brief explosion of 'blaxploitation' cinema in the early 1970s, the dudes had Shaft, Super Fly and Blacula while the girls had Coffy - billed as "the baddest one-chick hit-squad that ever hit town".
DVD OF THE WEEK; Movies
It then describes work by African Americans, including Octavia Butler, Sun Ra (musician), and George Clinton (musician), as well as exploitation films (Blacula, Blackenstein).
Butler, Andrew M.: Solar Flares: Science Fiction in the 1970s
Naar, a former William Morris agent who went on to produce blaxploitation vampire pies "Blacula" and "Scream Blacula Scream" as well as TV series "Starsky & Hutch," died Jan.
Joseph T. Naar: former WMA agent repped Monroe; then produced 'Blacula,' 'Starsky & Hutch'
"Rethinking Blacula: Ideological Critique at the Intersection of Genres." JPFT 40.2 (2012): 62-74.
Annual Bibliography of Film Studies--2012
Ackerman, Shelly Weiss, Al Adamson; Blacula, United States, 1972, producers: Samuel Z.
Dead, undead, but still alive