Blavatsky, Helena Petrovna (blətvătˈskē), 1831–91, Russian theosophist and occultist. She was the daughter of a German named Hahn who had settled in Russia and who was distantly connected with the Russian aristocracy. At the age of 16 she married an elderly man, Nicephore Blavatsky, whom she soon left. She traveled extensively in Asia, the United States, and Europe. An imposing and persuasive woman, she claimed to have spent seven years in Tibet, where she was supposedly initiated into mysteries of the occult. In 1873 she went to New York City, and in collaboration with prominent persons interested in spiritism she founded (1875) the Theosophical Society. The society soon experienced serious schisms, and in 1878 Madame Blavatsky, as she was known, left for India, where she established headquarters at Adyar near Madras (now Chennai). There she devoted herself, with some success, to theosophical organization and propaganda. She demonstrated many supernormal phenomena, which were accepted as miracles by her followers, but published claims of fraud in the 1880s and 90s seriously damaged her reputation. Her major works were Isis Unveiled (1877) and The Secret Doctrine (1888), which became the textbooks of her disciples. The day of her death (May 8) is celebrated by her followers as White Lotus Day. 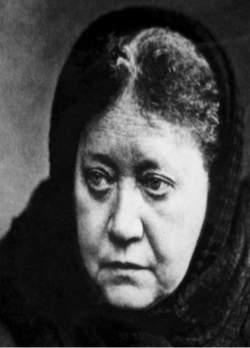 Helena Petrovna Blavatksy was born on August 12, 1831, in Ekaterinoslav, a town on the river Dnieper in southern Russia. She became one of the best known and most influential occultists in the world and was considered by many to be an excellent Spiritualist medium.

Helena’s father was Colonel Peter Hahn, a Russian officer and member of the Mecklenburg family. Her mother was Helena de Fadeyev, a well-known novelist who died young. Helena’s maternal grandmother was Princess Helena Dol gorukov, a gifted writer and botanist. Count Sergei Yulievich Witte, a Tsarist prime minister, was Helena’s cousin. After the early death of her mother in 1842, Helena was brought up by her maternal grandparents, at their house in Saratov. Her grandfather was Civil Governor there.

An exceptional child, at an early age Helena was aware of being deeply sensitive and of possessing certain psychic powers. She could see spirits that were invisible to her friends and could foresee certain future events through various forms of divination. She was a natural linguist, a talented pianist, and a fine artist. She was also a fine horsewoman. According to her sister’s memoirs, Helena had frequent bouts of somnambulism, walking in her sleep and speaking in unknown tongues (glossolalia). She could also cause hallucinations in her playmates with her vivid storytelling. Helena received no formal education and at the age of seventeen she married a much older man, Nikifor (or Nicephore) Blavatsky, Vice Governor of the Province of Erivan in Transcaucasia.

Within a few months of her marriage, Helena ran away to adopt a nomadic existence—a life that has been compared to the Victorian equivalent of a hippie—moving through Egypt, Greece, and Turkey. In London by the time she was twenty, Helena met an individual whom she claimed to have known from her childhood visions. He was the Mahatma Morya (or “M,” as he became known among Theosophists, in later years), an Eastern Initiate of Rajput birth. He told Helena of the spiritual work that lay ahead of her, and from then on she fully accepted his guidance.

Later in 1851, Helena embarked for Canada. She traveled to various parts of the United States, Mexico, South America and the West Indies. In 1852 she went to India, traveling by way of the Cape and Ceylon. She was prevented from entering Tibet; in 1853 she returned to England. In the summer of the following year she again went to America, where she crossed the Rocky Mountains with a caravan of emigrants. In late 1855 she returned to India, this time going by way of Japan. On this attempt she succeeded in entering Tibet, doing so through Kashmir and Ladakh. By 1858 she was in France and then Germany, finally returning to Russia in the late fall of that year. She stayed a short time with her sister Vera at Pskov.

By this time Helena had developed strong mediumistic abilities and achieved considerable fame as a Spiritualist medium, with a spirit guide named John King. It was said that whisperings, rappings, and other strange phenomena were heard all over her house. From 1860 to 1865, she traveled through the Caucasus and then left Russia again in the fall of 1865, going on to the Balkans, Egypt, Syria, Greece, and Italy.

In 1868 Helena again went to Tibet, this time via India. On this trip she met “the Master Koot Hoomi” (K.H.) for the first time, and stayed in Little Tibet and also in Great Tibet. She then underwent part of her occult training with her Master. She later reported that she had been initiated by the “Hidden Masters,” who were to become her driving force for the rest of her life. By late 1870, she was back in Cyprus and then Greece. En route to Egypt, Helena sailed aboard the Eumonia, which was shipwrecked on July 4, 1871, near the island of Spetsai. Helena was saved from drowning. She went on to Cairo, where she tried unsuccessfully to form the Société Spirite. After further travels through the Middle East, she returned for a short time to her relatives at Odessa, Russia, in July of 1872.

In the spring of 1873, Helena was instructed by her Teacher to go to Paris. From there, on further direct orders from him, she left for New York City, arriving on July 7, 1873. Then forty-two years old and in possession of many spiritual and occult powers, she worked for a while as a dressmaker to earn a living. A year later, on a whim, she traveled to Vermont to witness the much-publicized Eddy Brothers, William and Horatio, two Spiritualists who produced a variety of phenomena. It was there that she met Colonel Henry Steele Olcott, a man with a reputation for honesty. He had served in the Civil War and later worked for the U.S. Government. Fodor says of her psychic abilities at this time: “Whereas there is a limit to the phenomena of every Spiritualist medium, Mme. Blavatsky apparently knew none. From the materialization of grapes for the thirsty Colonel Olcott in New York to the duplication of precious stones in India, or the creation of toys for children out of nothingness, she undertook almost any magical task and successfully performed it to the stupefaction of her coterie.”

Helena launched into journalism, translating Olcott’s articles into Russian and writing her own articles on Spiritualism. In the opinion of the “Mahatmas,” or Adepts, Helena Blavatsky was the best available instrument for the work they had in mind, namely to offer to the world a new presentation of the age-old Theosophia—”The accumulated Wisdom of the ages, tested and verified by generations of Seers….” Her task was to challenge both the entrenched beliefs and dogmas of Christian Theology and the equally dogmatic materialistic view of the science of her day.

On September 7, 1875, Blavatsky and Olcott, together with several others, founded the Theosophical Society. The inaugural address by the President-Founder Colonel Olcott was delivered November 17, 1875, which is considered to be the official date of the founding of the Society. They stated the aims of the society to be:

In September 1877, Blavatsky’s first monumental work, Isis Unveiled, was published. It was her book on the divine wisdom, or body of truth, concerning god, man, and the universe. She claimed that, while writing it, she had glimpsed the goddess Isis herself. The first printing of 1,000 copies sold out within ten days.

On July 8, 1878, Blavatsky was naturalized as a U.S. citizen and in December of the same year she and Colonel Olcott left for India via England. They arrived in Bombay in February, 1879, and there established their Theosophical Headquarters. A. P. Sinnett, editor of The Pioneer, added importance to their activities by publishing frequent reports. After a tour of northwestern India, they returned to Bombay and started their first Theosophical Journal, The Theosophist in October, 1879, with Helena as editor. From then on the society experienced rapid growth, and the journal is still published today.

In May 1882, the society purchased a large estate in southern India at Adyar, near Madras, and the Theosophical Headquarters was moved there. During this period Colonel Olcott engaged in widespread mesmeric healings until February 1884, when he left for London to petition the British Government on behalf of the Buddhists of Ceylon (Sri Lanka). Helena, then in very poor health, went to Europe with him. She produced many marvels at séances she held over an extended period. So much publicity was generated by her mediumship that it provoked the Society for Psychical Research to send an investigator to Adyar. This was Richard Hodgson who, after a superficial examination, claimed to find nothing but fraud. He also accused Madame Blavatsky of being a Russian spy. Alex and Emma Coulomb, a couple who had been with Helena since 1880, stated that they had been instruments in perpetrating much of the fakery. Helena wanted to sue the couple but was overruled by a Committee of leading Theosophical Society members. In disgust, she resigned as Corresponding Secretary of the Society and, on March 31, 1885, left for Europe, never again to return to India.

She settled first in Italy and then, in August, 1885, at Wurzburg, Germany, where she worked on The Secret Doctrine, much of which was written either by automatic writing or by inspirational writing. The vicious attack on Helena had a most unfavorable effect on her health. In July 1886, she relocated to Ostend, Belgium, and in May of the following year, at the invitation of English Theosophists, she moved to a small house in London. Immediately after her arrival in England, Theosophical activities began to move rapidly. The Blavatsky Lodge was formed and started publicizing Theosophical ideas. She continued to work on her book, which was finally completed and published in two volumes in October and December, 1888.

The Secret Doctrine was to become the crowning achievement of Blavatsky’s literary career. It is an account of the root knowledge of all religion, philosophy, and science. Also in October 1888, she formed the Esoteric Section (or School) of the Theosophical Society, “for the deeper study of the Esoteric Philosophy by dedicated students.” In July 1890, she established the European Headquarters of the Theosophical Society in London. Helena Petrovna Blavatsky died on May 8, 1891, in London during a severe epidemic of flu in England. She had been suffering from Bright’s disease. Colin Wilson said, “It seems fairly certain that Madame Blavatsky was a genuine medium of unusual powers. It is more certain that, when her somewhat erratic powers were feeble, she helped them out with trickery—a temptation to which dozens of bona fide mediums and magicians have succumbed.”