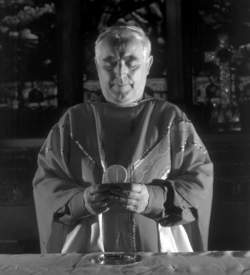 A priest preparing the Eucharist, the embodiment of Christ, for the sacrament of Holy Communion. Fortean Picture Library.

Augustine (354-430 CE) was the first to officially define the word sacrament, and his definition has stood the test of time. He said it was "an outward and temporal [visible] sign of an inward and enduring grace."In other words, a sacrament incorporates visible symbols that illustrate an invisible work of God. One example is baptism (see Baptism), which uses water to illustrate the theological premise that God "washes away" sin.

But some theological explanations go deeper than what is suggested by the word "illustrate." Some religions teach that the actual act, using the visible symbol, is what triggers the inward reality. In the case of baptism, for example, there are those who believe that without the outward act of cleansing, the inward reality never happens. In other words, if you are not baptized with water according to the rituals of the particular sect, you are not "saved."

Early on, the Roman Catholic Church recognized seven specific sacraments. Most Protestant denominations recognize only baptism and the Lord's Supper as sacraments. But even within these communities there is often disagreement as to the meaning, extent, and outward presentation of each sacrament.

in Christianity, a magical religious rite; according to church teachings, a sacrament gives a person a supernatural miracle-working power (“divine grace”).

The origins of the sacraments go back to the pre-Christian mysteries. The sacraments were gradually introduced with the establishment and strengthening of the Christian church organization. The first sacraments mentioned in Christian literature were baptism and the Eucharist (end of the first to the second century, Epistles of the Apostles, Acts of the Apostles).

In the 13th century (definitively at the Council of Florence of 1438–45), the Roman Catholic and the Eastern Orthodox churches adopted seven sacraments: (1) baptism, which is administered to a person as a sign of acceptance into the church and to cleanse the person of alleged sins (in the Orthodox tradition it is administered by immersing an infant in water, in the Catholic tradition by pouring water, and in the Protestant tradition by sprinkling water); (2) confirmation (Roman Catholic) or anointing (Eastern Orthodox), by which a person is “sanctified” by being anointed with an aromatic mixture (chrism); (3) Eucharist, by which, according to Christian teachings, believers receive the body and blood of Christ and in so doing free themselves of sins (in the Orthodox Church both laymen and clergy partake of bread and wine, and in Catholicism the clergy take bread and wine and laymen, as a rule, only partake of the bread); (4) penance (confession), the disclosing of one’s sins to a priest and receiving absolution (“remission of sins”) in the name of Christ; (5) matrimony (in the Catholic Church this cannot be dissolved); (6) extreme unction, or anointing of the sick, which is administered to a sick person (according to Orthodox teaching it cures illnesses, and in Catholicism it is a blessing over a dying person); and (7) holy orders, which is administered by a bishop, admits a person into the priesthood (the sacrament formed with the rise of a clergy).

1. an outward sign combined with a prescribed form of words and regarded as conferring some specific grace upon those who receive it. The Protestant sacraments are baptism and the Lord's Supper. In the Roman Catholic and Eastern Churches they are baptism, penance, confirmation, the Eucharist, holy orders, matrimony, and the anointing of the sick (formerly extreme unction)
2. the Eucharist
3. the consecrated elements of the Eucharist, esp the bread
Collins Discovery Encyclopedia, 1st edition © HarperCollins Publishers 2005

Feedback
Flashcards & Bookmarks ?
Please log in or register to use Flashcards and Bookmarks. You can also log in with
Flashcards ?
My bookmarks ?
+ Add current page to bookmarks
Mentioned in ?
References in periodicals archive ?
Blessed Sacrament RC Primary School has been rated as Good at its most recent Ofsted inspection.
Islington primary school ratings Blessed Sacrament RC Primary School; Find out how Blessed Sacrament RC Primary School rates compared to other primary schools in Islington with our school ratings
Blessed Sacrament Catholic Church, a Jesuit parish, came together with 18 other Jesuit institutions in Los Angeles and Orange County to help raise awareness and influence legislation about homelessness.
Help in the heart of Hollywood
RESULTS: Premier Div: Breeze 2 (Jones, Green) BRNESC 4 (Fitzsimmons, Fearns 2, Kirkby), Home & Bargain 1 (Birchall, og McMahon) Blessed Sacrament 1, SNACC Sports 5 Norcoast 6 (Jones 2, Denton 4).
Amateur Football: Fearns blows Breeze away; Liverpool Business Houses Football League
Assembly time will be at 1:30 p.m., to be followed by the Exposition of the Blessed Sacrament at 2:05 p.m.
Sta. Cruz Parish set as Archdiocesan Shrine of the Blessed Sacrament
Mother Teresa, who more than any other individual in the world was known for responding to the needs of the poorest of human beings, always made it known that she and her Sisters of Charity spent time in prayer and reflection in front of the Blessed Sacrament before going into the streets.
Oh where, oh where has the supernatural gone?
Even the young, authors tell us in books like The New Faithful (Loyola), are clamoring for a return to such traditions as prayer to the Sacred Heart, the rosary, and adoration and Benediction of the Blessed Sacrament. Indeed, I'm told a young seminarian at the local parish was the driving force behind that Sunday procession.
Let's not be so devoted to devotions: it warms old-timers' hearts to hear of people flocking to eucharistic adoration, novenas, and other traditional devotions. But is there a downside to all this popular piety? One young Catholic argues we should put our focus back where it belongs--on the Mass
Most Blessed Sacrament, once the largest Catholic school in the country, and the Good Shepherd school will shut down permanently at the end of the current academic school year in June.
Cardinal Bevilacqua to close two parish schools. (Nation)
Charlie McDonough (Blessed Sacrament) was the first runner home followed by Finn Neary (St Paul's) and Tobias Cruise (King David).
Booker take top prizes in the Gardens; GOT A STORY T0 TELL? Call 07940 751774 or email timsport@googlemail.com athletics
She was a communicant of Sacred Heart of Jesus Church, a member of the Third Order of Saint Francis, a member of the Ladies of Saint Anne, a weekly adorer at the Blessed Sacrament Chapel, and a member of the Living Rosary and of the Family Apostolate Ministry.The funeral will be held Saturday, December 27, from Scanlon Funeral Service, 38 East Main Street, with a Mass at 10:00 AM in Sacred Heart of Jesus Church, 16 East Main Street.
Domenica Sofrin
Do concerns about sacrilegious reception of the Blessed Sacrament generate any concern among the faithful?
Re Ontario Catholic school system
Katharine Drexel (1858-1955), founder of the Sisters of the Blessed Sacrament.
Portraits of mercy
Mary was a communicant of Blessed Sacrament Parish and a member of the Dominican Laity.
Mary Greaney