blockhouse, small fortification, usually temporary, serving as a post for a small garrison. Blockhouses seem to have come into use in the 15th cent. to prevent access to a strategically important objective such as a bridge, a ford, or a pass. Later the term was broadened to include all detached and isolated small forts, especially those in country just captured from an enemy. The typical blockhouse was of two stories, with an overhanging second story and loopholes on all sides for gunfire. In the North American colonies, blockhouses were used in frontier communities as protection against Native American attacks; they were built of timber or stone (in New England) or of logs banked with earth (in the South and West). The frontier blockhouses were frequently surrounded by palisades and thus were technically stockaded forts. The principal use of blockhouses in present-day military fortification is in defending isolated units against small-arms fire. See pillbox.
The Columbia Electronic Encyclopedia™ Copyright © 2022, Columbia University Press. Licensed from Columbia University Press. All rights reserved.
The following article is from The Great Soviet Encyclopedia (1979). It might be outdated or ideologically biased.

a defensive structure adapted for all-around machine gun, and sometimes artillery, fire. A blockhouse may be made of wood, stone, concrete, or steel, sometimes with armor, and has living quarters for a garrison. Blockhouses were widely used in the Anglo-Boer War of 1899–1902 and in World Wars I and II, especially to cover railroad bridges, for defense of cities, in forested swamp areas, on mountain passes, and in systems of permanent fortification.

[′bläk‚hau̇s]
(engineering)
A reinforced concrete structure, often built underground or half-underground, and sometimes dome-shaped, to provide protection against blast, heat, or explosion during rocket launchings or related activities, and usually housing electronic equipment used in launching the rocket.
The activity that goes on in such a structure.
McGraw-Hill Dictionary of Scientific & Technical Terms, 6E, Copyright © 2003 by The McGraw-Hill Companies, Inc. 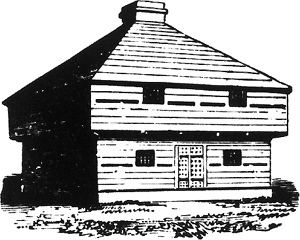 blockhouse
1. A fortified structure used to furnish protection against enemy attack in frontier areas, usually at a location of strategic importance; often square or polygonal in plan; typically constructed of hewn timbers having dovetailed notches at the corners to provide strong rigid joints; commonly, an overhanging upper story; often masonry walls on the ground story with log construction above, or entirely of log construction; frequently, a pyramidal roof; usually a few small windows with heavy shutters; loophole openings through the walls permit the firing of guns over a wide range of angles.
2. A reinforced concrete structure that provides shelter against the hazards of heat, blast, or nuclear radiation.
McGraw-Hill Dictionary of Architecture and Construction. Copyright © 2003 by McGraw-Hill Companies, Inc.

Feedback
Flashcards & Bookmarks ?
Please log in or register to use Flashcards and Bookmarks. You can also log in with
Flashcards ?
My bookmarks ?
+ Add current page to bookmarks
Mentioned in ?
References in periodicals archive ?
The blockhouse rises inside and above the height of the palisade.
Chateau Bay, Labrador, and William Richardson's 1769 sketch of York Fort
the Nazi gliders reached the air above Eben Emael and then, almost as one, the teams dived sharply to avoid antiaircraft fire, landing within close range of the domes and blockhouses protecting the guns.
The mastermind behind SEAL team six and the end of Osama Bin Laden
They'd left behind all kinds of construction debris after they finished the blockhouses, and since they'd started to save energy by turning the lights off every night, I'd noticed a lot of one-eyed dogs in our beautiful hometown.
Daddy Wants TV Saturday Night
The American commander in Archangel had very little contact with his troops in the beginning of the intervention as their force was dispersed to conduct small scale patrols, river operations, and amphibious assaults to secure either World War I style trenches or Boer War era blockhouses.
Russian Sideshow: America's Undeclared War, 1918-1920
Reconstructed fort with two blockhouses containing exhibits on the Seminole Indian wars.
Delving into the deep south: Part II
So the government harvested the produce, but took the vegetables to the reserve officers' blockhouses for storage.
701st Military Police Battalion
Gaping craters and blockhouses witness to the intensity of the fighting.
Church Matters
Externally, this pavilion has disturbing overtones of abandoned blockhouses or military vehicles.
Battle lines: creating a memorial to a battle of mythical importance with no obvious surface traces necessitated architectural imagination of great sensitivity which has overlaid past with present, place with narrative, time with space
Twelve blockhouses were built in Helsinki in the 1970s on a former dump area containing industrial and household waste.
Increased incidence of cancer and asthma in houses built on a former dump area. (Articles)
Concentration camps and small forts or blockhouses, which were strung together by 3,700 square miles of barbed wire fencing, became the chief means of achieving this end.
HELL IN SMALL PLACES: AGRARIAN ELITES AND COLLECTIVE VIOLENCE IN THE WESTERN TRANSVAAL, 1900-1907
...In August 1912 trouble began breaking out on the Turco-Montenegrin frontier -- sharp fights in several places and some Turkish blockhouses were burnt.
The Serbs: a warning from a past contributor
The town is surrounded by a thick, high wall, with towers and blockhouses at frequent intervals....
The square city-palace in the state of Lilliput