Also found in: Medical, Wikipedia.
The following article is from The Great Soviet Encyclopedia (1979). It might be outdated or ideologically biased.

(or shadow effect), the occurrence of characteristic intensity minima, or shadows, in the angular distribution of particles emanating from the lattice sites of a single crystal. The blocking effect is observed for positively charged heavy particles (protons, deuterons, and heavier ions). The shadows form in the directions of the crystallographic axes and planes.

Figure 1. Origin of the blocking effect

The appearance of a shadow in the direction of a crystallographic axis (an axial shadow) is caused by the deflection of particles originally traveling in the direction of the axis by the intra-atomic electric field of the atoms that are closest to the emitting site and are located in the same row (Figure 1). The distribution of the relative particle intensity γ in the shadow region is illustrated in Figure 2. The angular dimensions of the shadow are determined by the relation 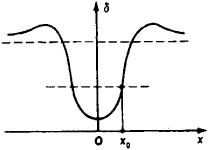 Figure 2. Angular distribution of the intensity of the flux of particles emanating from a crystal in the blocking effect

shadow for a perfect crystal, that is, a crystal without imperfections, is approximately one one-hundredth of that at the periphery.

The blocking effect was discovered in 1964 independently by A. F. Tulinov of the USSR and by B. Domeij and K. Björkqvist of Sweden. The particle beams in which the shadows were observed were of different origins. In Tulinov’s experiments the particles were products of nuclear reactions in the nuclei of the crystalline target under the action of accelerated particles. Domeij and Björkqvist introduced alpha-emitting nuclei into the crystal lattice sites by the ion implantation method and observed shadows in the angular distribution of the alpha particles emitted from the crystal. The first method was found to be more general, and it was used for virtually all subsequent experiments. In particular, this method made possible the observation of plane shadows—that is, regions of decreased particle intensity having the form of straight lines and lying in the directions of crystallographic planes. In recording plane shadows, nuclear emulsions are often used as the detector, since they permit the recording of a shadow pattern within a large solid angle. A complicated shadow pattern is formed on the emulsion.

The blocking effect is made use of in nuclear and solid-state physics. A method for measuring the duration τ of a nuclear reaction in the range 10–16–10–18 sec has been developed on the basis of the blocking effect. Information on the value of τ is extracted from the shape of the shadows in the angular distributions of charged nuclear-reaction products, since the shape is determined by the displacement of the compound nucleus from the lattice site during the lifetime of the nucleus. In solid-state physics, the shadow effect is made use of in studying the structure of crystals and the distribution of impurity atoms and defects. Methods based on the shadow effect are especially effective in studying thin single-crystal layers of a substance (10–1,000 angstroms).

Feedback
Flashcards & Bookmarks ?
Please log in or register to use Flashcards and Bookmarks. You can also log in with
Flashcards ?
My bookmarks ?
+ Add current page to bookmarks
Mentioned in ?
References in periodicals archive ?
New generation biologics represent an advance over the older TNF-Inhibitors, they are more specific blocking effects, more effective and well tolerated.
Autoimmune and Molecular Insights into Skin Psoriasis and psoriatic Arthritis
Among the studies of cue competition effects in human causal learning, those focusing on the blocking effect seem to have engendered the most notable and impactful amount of empirical research and theoretical controversies (Delgado & Medina, 2013).
Blocking in humans: logical reasoning versus contingency learning
It is apparent to say at this point that the change in structure can be linked to a robust blocking effect of the cationic surfactant of solanum tuberosum juice and Al oxide films in either case which might influence nuclei replenishment and hence impacting smaller grain size.
Electro-Oxidation Performance and Photo-Structural Characterization of Induced Natural Additive on Chloride Electrolyte Thin film Coated Steel
Moreover, assuming full transfer from the L1, Whong-Barr and Schwartz (2002) and Oh (2010) found that similarities between the native and the target language would facilitate the acquisition of a specific construction, whereas differences between the two languages would hinder the acquisition due to a negative blocking effect of the L1.
Double object constructions in L3 English: an exploratory study of morphological and semantic constraints
From the fusion result, it is demonstrated that our proposed method avoids the blocking effect and has the best performance in Piella's metric.
Region-based image-fusion framework for compressive imaging
The softly rounded frame is a throwback to 1960s preppy fashion and is available with clever colour blocking effect layers of red and navy on the frame front, offset with pure red temples.
California dreamin'
This study examines if the blocking effect paradigm predicts causal judgments when consequences of events vary in valence and magnitude.
Magnitud y valecia de las consecuencias como determinantes de la atribucion de juicios causales
We tested how these manipulations affected the maintenance of the selective blocking effect. In both cases, we hypothesized that experimental treatment would heighten the threat value of the blocked CS.
Reappraisal of threat value: loss of blocking in human aversive conditioning
The relative gap between the two can be decomposed into the product of the relative efficiency, congestion efficiency and scale efficiency which is used to measure the "blocking effect" and "efficiency loss "of the DMU.
Agricultural production inputs comprehensive efficiency: a view of Jiangsu province China second agricultural census
Junaid Esmail Makda, Vice President, KCCI, at the meeting also suggested reviewing the sensitive list under South Asia Free Trade Agreement (SAFTA), which has a blocking effect on Pakistani goods to enter into the Indian markets.
Karachi Chamber calls for removal of Indian non-tariff barriers
At the same time the corrosion blocking effect at these relatively high positive potentials decreases especially in the case of [I.sub.-] anions (see Fig.
The effect of halide ions on nickel corrosion in perchloric acid solutions/Halogeniidioonide moju nikli korrosioonile perkloorhappelahuses