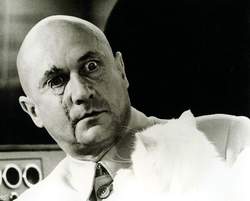 Donald Pleasence as Ernst Stavro Blofeld in You Only Live Twice (1967).

(pop culture)
Ernst Stavro Blofeld is the most pertinacious of the supervillains to match wits with British superspy James Bond, having appeared in three Bond novels and seven films. In Ian Fleming's novel Thunderball (1961), Blofeld is portrayed as an organizer, not as the tale's principal adversary; Thunderball's prototypical plot regarding stolen nuclear warheads used for extortion is instead propelled by Emilio Largo, one of Blofeld's henchmen. Thunderball introduces yet another representative element crucial to spy sagas, the evil organization, in the form of Blofeld's crime network SPECTRE (the Special Executive for Counterintelligence, Terrorism, Revenge, and Extortion). Blofeld operates from a variety of ultra-sophisticated, expansive laboratories and facilities, popu-lated by mostly nameless accomplices he regards as expendable. His lairs are equipped with secret escape passages and vehicles for his own transport in the always-likely event that Bond will infiltrate and destroy his headquarters. Through SPECTRE, he has attempted such atrocities as goading the superpowers into world war and creating a laser satellite powered by diamonds. His ultimate victory over his archfoe was his murder of Bond's wife, Tracy. Blofeld's roots unfolded in Fleming's novels Thunderball, On Her Majesty's Secret Service (1963), and You Only Live Twice (1964). Born on May 28, 1908 (Fleming's birthdate), in Poland, Blofeld studied science and engineering before working for the Polish government's Ministry of Posts and Telegraphs, where he first engaged in lawlessness via insider trading. Using his government connections he erased all records of his existence and went underground, selling top-secret information to both sides during World War II, then relocating to South America and setting up SPECTRE. Fleming regularly altered Blofeld's physical guises in the novels to safeguard his identity, but in the films, beginning with his first screen outing in From Russia with Love (1963), his trademarked look was a bald pate (although he had hair in Diamonds Are Forever, 1971), a Nehru jacket, and on some occasions a facial scar. Also famous were the teasers in his earliest movie appearances in which Blofeld's face was not revealed, but his hands were shown stroking a white Angora cat and his voice was heard issuing orders (Dr. Claw, nemesis of the 1980s animated hero Inspector Gadget, lampooned this, as did the most blatant of Blofeld parodies, Mike Myers' Dr. Evil from the Austin Powers movies). On the screen, Blofeld has been portrayed by Anthony Dawson (hands) and Eric Pohlman (voice) (From Russia with Love, 1963, and Thunderball, 1965), Donald Pleasance (replacing the ailing Jan Werich in You Only Live Twice, 1967), Telly Savalas (On Her Majesty's Secret Service, 1969), Charles Gray (Diamonds Are Forever, 1971), John Hollis (uncredited, For Your Eyes Only, 1981), and Max von Sydow (Never Say Never Again, 1983). Blofeld, whose name was taken from the father of creator Fleming's schoolmate, was also intended for inclusion in the film The Spy Who Loved Me (1977) but dropped due to contractual entanglements.
The Supervillain Book: The Evil Side of Comics and Hollywood © 2006 Visible Ink Press®. All rights reserved.