Blood pressure is strongest in the aorta, where the blood leaves the heart. It diminishes progressively in the smaller blood vessels and reaches its lowest point in the veins (see circulatory system). Blood pressure manifests itself dramatically when an artery is severed or pierced and the blood (under pressure) ejects in spurts.

Factors other than heart action and the condition of the arteries also influence blood pressure. Temporary high blood pressure usually occurs during or following physical activity, nervous strain, and periods of rage or fear. Therapy for persistent high blood pressure, sometimes called hypertension, consists of sufficient rest, a diet low in salt and alcohol, reduction in weight where there is obesity, and increased exercise. Drug therapy may include diuretics, beta-blockers, calcium-channel blockers, or ACE inhibitors. Low blood pressure (hypotension) has not been studied as extensively as high blood pressure. If not caused by disease or injury, it is generally considered to be a benign or even advantageous condition; however, studies have linked hypotension with feelings of tiredness or faintness and minor psychiatric conditions in some people. 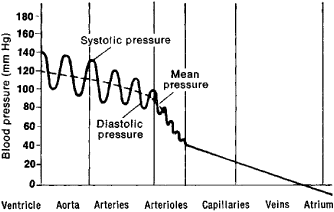