common name for some members of the Geraniaceae, a family of herbs and small shrubs of temperate and subtropical regions. Their long, beak-shaped fruits give them the popular names crane's-bill (for species of the genus Geranium, the true geranium), heron's-bill (genus Erodium), and stork's-bill (genus Pelargonium). The American wild geranium, or wild crane's-bill, has rose-to-purple five-petaled flowers and handsome, deeply forked leaves; the woodland herb Robert is similar but smaller. Florists' geraniums are hybrid varieties of the S African genus Pelargonium in which the "petals" are actually highly modified stamens. Geraniums are cultivated not only as ornamentals but for the aromatic oils extracted from their foliage and flowers for use in flavorings and perfumes. Geraniums are classified in the division MagnoliophytaMagnoliophyta
, division of the plant kingdom consisting of those organisms commonly called the flowering plants, or angiosperms. The angiosperms have leaves, stems, and roots, and vascular, or conducting, tissue (xylem and phloem).
..... Click the link for more information. , class Magnoliopsida, order Geraniales, family Geraniaceae.
The Columbia Electronic Encyclopedia™ Copyright © 2013, Columbia University Press. Licensed from Columbia University Press. All rights reserved. www.cc.columbia.edu/cu/cup/ 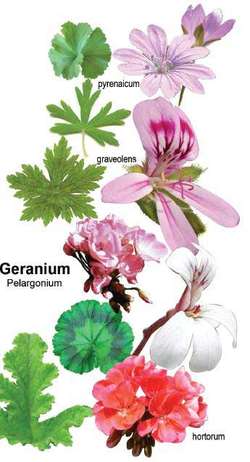 All geraniums are edible- yay!
Edible Plant Guide © 2012 Markus Rothkranz
The following article is from The Great Soviet Encyclopedia (1979). It might be outdated or ideologically biased.

(1) A genus of plants of the family Geraniaceae. They are perennial, less frequently annual, herbaceous plants. The leaves are lobed or dissected and have stipules. The blossoms are regular and pentamerous; there are ten stamens; the ovary is superior and consists of five rostrate carpels. There are approximately 400 species that are found everywhere but chiefly in the temperate zone of the northern hemisphere. In the USSR there are more than 50 species. Meadow cranesbill (G. pratense) and wood cranesbill (G. sylvaticum) are common on the edge of forests, in meadows, brushwood, and light forests; G. palustre, in herbaceous swamps; and small-flowered cranesbill (G. pusilium), as a weed. Some species of Geranium are cultivated as ornamentals.

(2) Sometimes plants of the genus Pelargonium, which also belong to the family Geraniaceae, are called geraniums.

[jə′rā·nē·əm]
(botany)
A genus of plants in the family Geraniaceae characterized by regular flowers, and glands alternating with the petals.
McGraw-Hill Dictionary of Scientific & Technical Terms, 6E, Copyright © 2003 by The McGraw-Hill Companies, Inc.

1. any cultivated geraniaceous plant of the genus Pelargonium, having scarlet, pink, or white showy flowers
2. any geraniaceous plant of the genus Geranium, such as cranesbill and herb Robert, having divided leaves and pink or purplish flowers
3. a strong red to a moderate or strong pink colour
Collins Discovery Encyclopedia, 1st edition © HarperCollins Publishers 2005