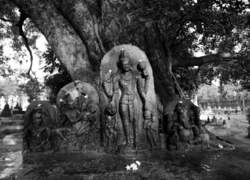 Feedback
Flashcards & Bookmarks ?
Please log in or register to use Flashcards and Bookmarks. You can also log in with
Flashcards ?
My bookmarks ?
+ Add current page to bookmarks
Mentioned in ?
References in periodicals archive ?
The growth of Buddhism around the globe has always been accompanied by the distribution of Bodhi trees as symbolic spiritual bridges that bring believers closer to the Buddha.
Towering Dagobas and Buddhist Relics of Anuradhapura
The Bodhi Tree is an offshoot of the holy Sri Maha Bodiya from Anuradhapura in Sri Lanka.
Sri Lanka gives Buddhist House in Berlin - Frohnau Bodhi tree
The Bodhi Tree is online at www.thebodhitreestudio.co.uk and on Facebook at www.facebook.com/thebodhitreestudio/and Instagram at www.instagram.com/bodhitreeyogi/?hl=en ?
Yoga venture set to launch
For Buddhists, the bodhi tree has magical powers such as the ability to cause rain, granting children to barren women, and predicting the future by withering branches or oozing secretions to indicate impending danger.
Treasured trees
The STTS tantra shows Gautama in difficulty under the Bodhi tree, trying to achieve enlightenment.
Serpent-enthroned Buddha of Angkor
These propositions and a number of responses to them were published in English in 1997 in Pruning the Bodhi Tree: The Storm Over Critical Buddhism.
A review of Critical Buddhism: Engaging with Modern Japanese Buddhist Thought
Prince Siddhartha Gautama sat under the Bodhi tree and fasted for more than 40 days, during which time he "awakened" and became the Buddha.
Holding fast: long practiced to purify body and mind, the discipline of fasting finds new relevance in modern research that points to powerful benefits to abstaining from food
But once he attained Enlightenment under the bodhi tree, he did not stay in the forest, reveling in his own Enlightenment.
The Essence of Spirituality: Service of Others
One day he sat under a bodhi tree and prayed to God for understanding.
The buddha who lives in our backyard
You can also check out a boutique hotel called Bodhi Tree, themed around the Buddha and, yes, the Bodhi Tree.
For a taste of the divine, dig into some fusion mishti
A small cylinder containing explosives has been found under the Bodhi tree, thought to be a descendant of the one that the Buddha sat under when he achieved enlightenment, according to tradition.
Man detained for India Buddhist shrine blasts
Fortunately, there was no damage to the Bodhi Tree or the main temple structure."
Serial blasts rock Budh Temple in India