bodhisattva (bōˌdĭsätˈwə) [Sanskrit,=enlightenment-being], in early Buddhism the term used to refer to the Buddha before he attained supreme enlightenment; more generally, any being destined for enlightenment or intent on enlightenment. The spiritual path of the bodhisattva is the central teaching of Mahayana Buddhism. One becomes a bodhisattva by arousing the “mind of enlightenment,” taking a vow to attain supreme enlightenment for the sake of all beings. The bodhisattva does not aspire to leave the round of birth-and-death (samsara) before all beings are saved; he is thus distinguished from the arahant of earlier Buddhism, who allegedly seeks nirvana only for himself and who, according to Mahayana teaching, has an inferior spiritual attainment. The practice of a bodhisattva consists of the six “perfections” or paramitas: charity (dana), morality (sila), forbearance (ksanti), diligence (virya), meditation (dhyana), and wisdom (prajna). Both laymen and monks may be regarded as bodhisattvas. In addition, many celestial bodhisattvas are worshiped along with the Gautama Buddha and the buddhas of other worlds. The most important celestial bodhisattvas are Avalokitesvara, the bodhisattva of compassion; Manjusri, the bodhisattva of wisdom, and Maitreya, who in heaven awaits birth as the next buddha. See also sunyata.
The Columbia Electronic Encyclopedia™ Copyright © 2022, Columbia University Press. Licensed from Columbia University Press. All rights reserved. 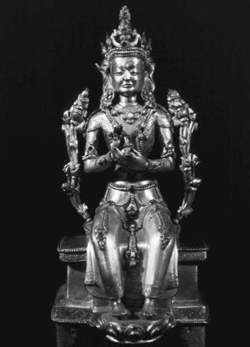