a structurally unified aggregate of devices used to produce hot water or steam under pressure through the combustion of fuel.

The main parts of a boiler unit (see Figure 1) are a combustion chamber and gas flues in which heating surfaces are located. The surfaces receive heat from the products of combustion of the fuel (as in superheaters, feed-water economizers, and air heaters). The components of a boiler unit are supported by a frame and are protected from heat losses by brickwork and insulation. 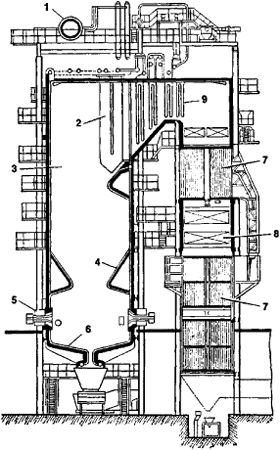 Boiler units are used in steam power plants to supply steam to turbines, in industrial and heating boiler rooms to produce steam and hot water for industrial and heating needs, and in ships’ boiler rooms. The design of boiler units depends on their purpose, the kind of fuel to be used, the method of fuel combustion, and the steam output per unit, as well as on the pressure and temperature of the steam produced by the boiler.

In the combustion chamber of a boiler, the fuel is burned and a partial cooling of combustion products occurs as a result of radiant heat exchange between the heated gases and the pipes covering the walls of the combustion chamber, through which a coolant (water or steam) circulates. The pipe system is called the furnace baffles. Upon leaving the combustion chamber, the gases have a temperature of the order of 1000°C. To further cool the gases, tubular heating surfaces (superheaters) are installed in the path of the gases; the surfaces usually have the shape of screens, or coiled tubes collected in flat banks. The heat exchange in the screen surfaces results from both radiation and convection; therefore, such surfaces are often called semiradiant surfaces. The gases, having passed through the screen of the superheater, enter convective high-pressure and low-pressure superheaters, in the shape of banks of tubes, at a temperature of 800°-900°C. The heat exchange on these and subsequent heating surfaces occurs primarily by convection, and the surfaces are called convective surfaces. A feed-water economizer is installed after the super-heater in the path of gases, which have a temperature of 600°–700°C; it is followed by an air heater, in which the gases are cooled down to 130°–170°C (depending on the kind of fuel burned). Further decrease in the temperature of the gases leaving the boiler unit through useful consumption of their heat for heating the working medium is hindered by condensation on the heating surfaces of water and sulfuric acid vapor, which forms during the combustion of sulfurous fuels. The condensation causes intensive contamination of the heating surfaces by ash particles and corrosion of metals. The cooled gases, after passing through ash-removal equipment (and sometimes sulfur-removal equipment), are ejected into the atmosphere through a smoke-stack. The solid products of combustion trapped in boiler units are removed, periodically or continuously, by ash- and slag-removal systems. To keep the heating surfaces clean boiler units are equipped with periodically operating apparatus for purging and washing and with vibrators and devices for shot cleaning.

According to the nature of motion of the working medium, a distinction is made between units with multiple (natural or forced) circulation and flow-through units. In boiler units with multiple circulation the working medium moves continuously in a closed loop that consists of heated and unheated pipes connected by intermediate chambers (collectors and drums); the medium evaporates partially in the heated part of the loop. The water vapor thus formed is separated from the water in a drum; the evaporated fraction of boiler water is replaced by feed water, which is supplied by a pump to the feed-water economizer and then to the drum.

The motion of the working medium in the circulation loop of boiler units with natural circulation occurs because of the difference in density between the steam-water mixture in the heated (rise) part of the loop and the water in the unheated or weakly heated (drop) part. In units with forced circulation the working medium is moved through the loop by a circulation pump. In units with multiple natural or forced circulation, continuous evaporation loss of boiler water takes place, causing an increase in the concentration of dissolved or suspended impurities (salts, oxides, and hydroxides). Such impurities can be deposited on the inside surfaces of heated pipes, thus causing a decrease in their cooling, overheating of the metal, and emergency stoppage of boiler operation because of ruptured pipes. In addition, an excessive concentration of impurities in boiler water cannot be tolerated because they are carried by the steam from the drum (either entrained in water droplets or dissolved in vapor) to the superheater and to the turbine, where they precipitate onto the turbine blades, thus lowering the efficiency of the turbine. Continuous or periodic boiler purging is used to prevent an increase in the concentration of impurities in boiler water. The highest permissible impurity concentration is determined by the design and parameters of a boiler unit, the composition of the feed water, and the thermal stresses of the heated baffle surfaces.

In a flow-through boiler unit, heating, evaporation of water, and superheating of steam all take place during one pass of the medium through its path. With such a process of steam generation, the impurities contained in the feed water cannot be removed from the boiler unit by purging part of the boiler water, as is the case in boiler units with natural or forced multiple circulation. In a flow-through boiler unit part of the impurities are precipitated on the inner surfaces of tubes and part (together with the steam) enter the turbine, where they are deposited on the turbine blades. Therefore, the quality requirements for feed water are most rigorous for flow-through units. Water entering such units is first treated in a water treatment system.

In power plants, economy of operation is improved by using schemes with secondary (intermediate) superheating. After a part of its thermal energy has been expended in the turbine, the steam is returned to the boiler unit, undergoes additional super-heating in the low-pressure superheater, and is again carried to the turbine. Boiler units with two intermediate superheatings also exist. The temperature of the secondary superheated steam is usually assumed to be the same as or close to that of the primary superheated steam. To maintain the required temperature of primary or secondary superheated steam, a boiler unit is equipped with such regulating equipment as mixing and surface heat exchangers, systems for recirculation of part of the cooled flue gases into the combustion chamber, and devices used to change the angle of elevation of the burners.

A boiler unit for a power module rated at 300 MW is a structure more than 50 m high, occupying a floor area on the order of 1,000 sq m. The construction of such a unit requires about 4,500 tons of metal, about one-third of which is used for piping systems operating at a pressure of 25 MN/m2 (250 kgf/cm2). The efficiency of boiler units exceeds 90 percent. The main parameters of power-engineering boiler units are shown in Table 1.

Feedback
Flashcards & Bookmarks ?
Please log in or register to use Flashcards and Bookmarks. You can also log in with
Flashcards ?
My bookmarks ?
+ Add current page to bookmarks
Mentioned in ?
References in periodicals archive ?
The statement said that a boiler unit and a turbine-type alternative has been replaced in the CHPP-1.
Preparation for heating season checked in CHPPs in Nur-Sultan
This is its third CFB boiler unit in South Korea firing biomass as its primary fuel.
Sumitomo SHI FW secures CFB Boiler deal in South Korea
Its interest in the scheme was sparked following an annual steam boiler inspection at one of its sites in December, which had to go ahead without a replacement hire boiler unit due to lack of availability, because of seasonal demand over the winter.
Annual steam protection service
A full bathroom suite, a boiler unit, heating radiators, a full kitchen suite and a cooker were taken.
Bathroom suite is stolen
The remaining part of Johnson Controls Marine & Navy segment, which held the Marine Container and Boiler business prior to the deal, is not subject to this transaction, Emerson said.Country: DenmarkSector: Computer Hardware, Computer Software, Water TransportTarget: Johnson Controls Inca[euro](tm)s Marine Container and Boiler unit Buyer: Emerson Electric CoVendor: Johnson Controls Inca[euro](tm)s
Emerson takes over Johnson Controls' marine container, boiler unit
The fire department discovered that the boiler unit was glowing red-hot at approximately 1100 degrees Fahrenheit, and was mere minutes from exploding.
Ground Safety Award of Distinction
A couple were seen leaving the premises early on Friday, August 9 with a white boiler unit.
Burglars return for a second cut
Until that year its Boiler Unit #4 used "closed-cycle" cooling, which recycles cooling water over and over, rather than dumping it into Mount Hope Bay.
The monster on the bay. (Rhode Island)
Turbine unit warming is 80% done, the root warming is almost done, boiler unit - 20% done because the contractor could not find necessary materials, he said.
Bishkek power plant ready for 2018-2019 heating season: Director
KING'S BOILER HIRE reports that as a busy bank holiday weekend approached, Pinewood Park Leisure Club in Upper Sherringham, Norfolk was faced with a major problem - the boiler unit heating the leisure club swimming pool failed and was beyond repair.
Temporary boiler units