(redirected from Bombing in Oklahoma City)
Also found in: Legal.
The following article is from Conspiracies and Secret Societies. It is a summary of a conspiracy theory, not a statement of fact. 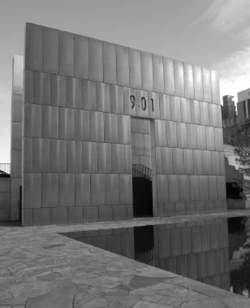 Timothy McVeigh was executed for the bombing of the Murrah Federal Building in Oklahoma City and Terry Nichols is behind bars for life, but conspiracy theorists insist that the two men were patsies for a sinister shadow agency.

On April 19, 1995, at 9:02 A.M., the Alfred P. Murrah Federal Building in Oklahoma City was destroyed in a massive explosion, killing 168 people, including nineteen children—exactly two years to the day after the final attack by federal law-enforcement agencies on the Branch Davidian compound at Waco ended in fiery death for the compound’s occupants. The Murrah Building housed the Bureau of Alcohol, Tobacco, and Firearms (ATF), the FBI, the Drug Enforcement Administration (DEA), the Defense Investigative Service, the Social Security Administration, the U.S. Army and Marines recruiting offices, and a day-care center. The explosion collapsed one-third of the building, and the bomb crater was thirty feet wide and eight feet deep.

At 10:20 A.M. and sixty miles north of the scene of death and destruction, Officer Charles Hangar stopped a 1977 yellow Mercury without license plates speeding at 80 miles an hour outside of Perry, Oklahoma. The driver was Timothy James McVeigh, who, in spite of being armed with a .45-caliber Glock pistol and a hunting knife, calmly surrendered and was booked in Noble County for driving without license plates and carrying a concealed weapon. A police check revealed McVeigh’s past as an army officer who had served with distinction in the Persian Gulf War. On his person, McVeigh carried a phone debit card issued to the Spotlight, the conspiracy publication of the anti-Semitic Liberty Lobby. Two days later McVeigh would be charged with the worst terrorist action ever carried out on U.S. soil prior to September 11, 2001.

Within another few days, a search by the ATF yielded blasting caps, sixty-foot Primadet detonator cords, ammonium nitrate, nitrogen fertilizer, and fifty-five-gallon plastic drums on a farm owned by Terry Nichols. Nichols and his brother James were members of the Michigan Militia, an apocalyptic right-wing group who believed that a United Nations invasion of America was imminent. Later, it would be discovered that McVeigh was a frequent visitor to Elohim City, a religious commune near the Oklahoma-Arkansas border. It was apparent to government investigators that the perpetrators of the Murrah bombing were right-wing, home-grown terrorists.

A great number of conspiracy theorists believe that the FBI covered up a Middle East connection to the Oklahoma City bombing in order to make the terrible act of destruction and loss of life appear to be entirely an act of domestic terrorism. In a Chicago Tribune article printed two days after the bombing, Vice Admiral William O. Studeman, acting director of the CIA, was quoted as saying that the bombing of the Murrah Building illustrated “the true globalization of the terrorist threat.” Studeman, as well as many other authorities quoted at that time, said the bombing had been accomplished with the help of agents outside the United States, in addition to Timothy McVeigh and Terry Nichols.

In February 1995 Studeman learned from the CIA station chief in the Philippines that Terry Nichols had met with Iraqi agents Abdul Murad, Ramzi Yousef, and Khalid Mohammed. Yousef had been imprisoned for the 1993 World Trade Center attack, but in February 1995 he was living with his uncle Khalid Mohammed, the mastermind of the 1993 WTC and Oklahoma City bombings, in an apartment in the Philippines. Later the plans for the Oklahoma bombing and a number of 9/11-style attacks on U.S. skyscrapers with airliners were found on Ramzi Yousef’s computer. This intelligence was fully translated by the FBI and CIA in late January and early February 1995. Nichols also met with eight Iraqi members of an al-Qaeda cell in the Philippines who, in addition to the bombings, planned assassination attempts on President Clinton and on the pope.

The leading Iraqi suspect seen helping McVeigh in Oklahoma City and Nichols in Kansas was Hussain al-Hussaini, who had been brought to the U.S. by President George H. W. Bush with the knowledge and help of help of CIA Director James Woolsey James Woolsey and his deputy Admiral William Studeman. Witnesses later identified al-Hussaini as being escorted by a well-dressed man named Khalid from Boston to Oklahoma City in November 1994. Other witnesses say that Khalid Mohammed, along with al-Qaeda leader Dr. Ayman al-Zawahiri, and FBI/CIA informant Ali Mohammed, were in Oklahoma City in 1995.

After the Murrah Building bombing, al-Hus-saini went to Houston and was assisted by Ishan Barbouti’s son Heider Barbouti. Studeman, as acting CIA director, knew of the Bar-boutis’ operations because the CIA under President George H. W. Bush’s direction had helped the Barboutis acquire WMDs for Iraq and Saddam Hussein.

In the weeks preceding the bombing Loudenslager became increasingly anxious because of the large amounts of ordnance and explosives that were stored in the Murrah Building. Loudenslager and the day-care center operator told many of the parents to get their children out, and because of their warnings, far fewer children were in the day-care center on April 19 than there otherwise would have been.

Shortly after the terrible blast, Loudenslager was actively helping in the rescue and recovery effort. Many individuals that horrible Wednesday morning either saw or talked with him. During the course of the early rescue efforts, however, he was seen and heard in a very heated argument with someone from the Bureau of Alcohol, Tobacco, and Firearms, accusing ATF of being in large part responsible not only for the bombing, but for the death and injury to those inside, including all the children. To the total amazement of a great number of police officers and rescue workers, it was later reported that Loudenslager’s body had been found inside the Murrah Building, still at his desk, a victim of the bombing. He is also officially listed as one of the 168 bombing fatalities.

Was Loudenslager murdered and placed at his desk? Or was he only said to have been found at his desk? Access to the inside of the building, from after the bombing onward, was extremely limited by the FBI.

Another point of contention for some conspiracists is the alleged nature of the bomb used by McVeigh. Some argue that a homemade fertilizer bomb packed inside a truck parked outside the building could not have delivered destructive force sufficient to render the damage that it allegedly caused. The recent release of a secret Pentagon report prepared by General Benton K. Partin, dated July 30, 1995, has refueled the flames of that debate. Partin sees evidence of an “inside job” and argues that there is evidence to indicate that explosive charges were placed on columns B3, A3, A5, and A7 of the building. The truck bomb was insufficient to destroy the columns, but it was responsible for ripping out some floors at the second- and third-floor levels.

Several witnesses claim that ATF employees were advised to stay home on that fateful Wednesday morning. While ATF denies such accounts, the grim fact remains that there were no ATF employees among the 168 dead.

Jayna Davis, an Oklahoma City television reporter, arrived at the Murrah Building thirteen minutes after the bombing and has been working on the case ever since. Davis discovered that six thousand Iraqis sought political asylum after surrendering during the first Gulf War. After being given asylum in the United States, the Iraqis were not tracked. Some among them were false defectors whose mission was to infiltrate the United States and form terrorist cells. Of the six thousand defectors, eighty were in Oklahoma City by the time of the bombing. Davis believes that eight of those eighty were fully involved in the bombing plot, and she has fully documented the testimony of twenty-two Arabs who witnessed that subversive activity. The Middle Eastern tie-in was upheld in the courts and also endorsed by former CIA director Woolsey in a court case. But after Davis turned in her paperwork to the FBI, they “lost” all of it. None of her evidence of the Arab connection was presented at the McVeigh and Nichols trials.

Conspiracy theorists maintain that Timothy McVeigh and Terry Nichols were recruited by al-Qaeda because both men were angry at the military and U.S. government for a variety of reasons. Simply put, the two join the long list of patsies utilized by shadow agencies to accomplish their sinister master plan.

Feedback
Flashcards & Bookmarks ?
Please log in or register to use Flashcards and Bookmarks. You can also log in with
Flashcards ?
My bookmarks ?
+ Add current page to bookmarks
Mentioned in ?
References in periodicals archive ?
The April 19, 1995, terrorist bombing in Oklahoma City precipitated a series of critical incident workshops.
Current best practices: coping with major critical incidents
The standard FBI report on the incident, known as a "302," states that "Murad responded to the guard's question by stating that the Liberation Army was responsible for the bombing." The FBI 302 then notes: "A short time later, Murad passed a note to the guard, again claiming that the Liberation Army was responsible for the bombing in Oklahoma City."
Terror trail: WTC, OKC, 9-11; journalists and congressional investigators are beginning to trace the terror trail backward from 9-11 to Oklahoma City and the earlier World Trade Center bombing. (Terrorism)
"The bombing in Oklahoma City killed 168 people, more people than any other single act of domestic terror in American history" states Linenthal, inaccurately, alas.
The Unfinished Bombing: Oklahoma City in American Memory. (Books)