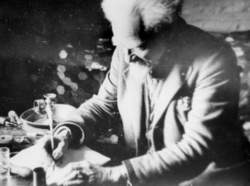 Gerald Gardner, who published a Book of Shadows in the 1950s. Courtesy Raymond Buckland.

Witchcraft was originally an oral tradition; all of its rites and beliefs were passed on by word of mouth, with nothing written down. It was not until the persecutions of the Middle Ages, when Witches had to meet in secret and, consequently, were unable to maintain contact with one another, that any of the rituals were set down. Since Witches were having to meet "in the shadows," as it were, the book acquired that name.

To be found in possession of such a book meant certain death; therefore, only one was kept for each group of Witches, whether the group comprised a single family or a coven formed of different families and individuals. If an individual Witch did keep a Book of Shadows, it would be burned at his or her death.

Later, as the persecutions eased, many of the surviving Witches who still practiced began to keep copies of the Book for themselves, supplementing the rituals with material that appealed to them as individuals. One might have a large section on herbal lore, another on divination, yet another on astrology. Where covens met, there was still a main Book of Shadows, kept by the High Priest or High Priestess, that was used at the coven rituals, whether or not the individual coven members also had their own books. This coven book contained all the rituals for Initiation, Esbats, Sabbats, Handfasting and Handparting, healing, divination, spells, chants, dances, and songs. It also contained what was known of the history of the particular coven, together with Witchcraft laws and ethics, the Wiccan Rede, and any necessary coven by-laws.

Today, some traditions (e.g. Gardnerian) still discourage individual coven members from keeping a full Book of Shadows. Since the rituals are performed only by the group as a whole, it is felt that so many books are unnecessary. The main coven book is therefore still kept by the High Priest or High Priestess, although coven members may be encouraged to keep their own abbreviated books focusing on their particular interests. But other traditions believe that all coven members should be able to copy everything from the coven book, although the priests of traditions with degree systems ensure that coven members copy only the appropriate passages for the degree to which they have arisen.

A Book of Shadows should be handwritten. It is regarded as a sacred book and, therefore, a book of power. By writing out all that it contains, some of this power is transferred to the writer. It should never, therefore, be typewritten or computergenerated. The title page of the book always bears the legend "The Book of Shadows of the Witch (Rowena, for example), in her own hand of write."

Some books are written in a very elaborate style; some are even written in one of the magical alphabets. This is fine for a personal book, used mainly for reference, but for a book that is actually used for performing rituals—one that is placed beside or on the altar and read from—it can make the reading of it very difficult, if not impossible. Some of the coven books used by degree-system covens have the higher degree material in one of the magical alphabets, with the bulk of the book in normal script.

The first Book of Shadows to appear outside a coven, available to the general public, was probably that of the Witch Maddalena, given to folklorist Charles Godfrey Leland and published by him in 1899. It was presented under the title Aradia, or the Gospel of the Witches (of Italy). This vangelo, or Book of Shadows, contains two alternative texts and was remarkable (for the time) in that it presented a religion based around Goddess worship, specifically that of Diana, Queen of All Witches, and her daughter Aradia.

No further Books of Shadows were forthcoming until the 1950s, when Gerald Gardner began writing about Witchcraft as a surviving religion. He was introduced and initiated into a coven in England's New Forest, in Hampshire, in early 1939. Excited to find that Witchcraft still existed and, further, that it was a benign, nature-based religion, he wanted to run out and tell the world. But his High Priestess, Dorothy Clutterbuck, would not allow it. It was not until ten years later that he finally was allowed to write something of what the Craft truly was, but in the form of a novel—High Magic's Aid. A few years later, after Dorothy's death in 1951 and the repeal of the Witchcraft Law that same year, Gerald was able to start writing non-fiction books that would help correct popular misconceptions about Witchcraft. The first of these was Witchcraft Today (Rider, 1954).

The Book of Shadows that Gerald obtained from "Old Dorothy," as she was affectionately known, was sparse and incomplete to Gerald's mind. From his lifetime of occult research, he tried to flesh it out, adding what he felt should be included and deleting what he felt did not belong. The sources for his additions were various and included pieces by Aleister Crowley, Rudyard Kipling, and Alexander Carmichael. Janet and Stewart Farrar, in their book The Witches Way, refer to this amended version as Gardnerian Text A. Over time he continued working on it, refining it to become the Farrar's Text B.

In 1953, Gardner initiated Doreen Valiente, and together the two set about completely revising the book. Doreen insisted on dropping much of the Crowley and O.T.O. material and rewrote much of the book herself, and included some of her poetry. This became Text C, the Book of Shadows that was to become known around the world.

Wicca is a mystery religion and, as such, requires an Oath of Secrecy from its Initiates. Despite this, the contents of the Gardnerian Book of Shadows began to appear in print—a passage here, a complete ritual there. Eventually, in 1971, the whole book was published by Lady Sheba, an American Witch who chose to ignore her oath. Previously, in England, Alex Sanders had managed to obtain a copy of most of the book and added ideas of his own—much of it from Ceremonial Magic—to lay claim to what he termed Alexandrian Witchcraft. Today the vast majority of Witches go by a Book of Shadows that owes much to the work of Gerald Gardner and Doreen Valiente.

No two Books will be found to be exactly the same (unless they are from the same tradition), yet all have the same basics, such as the celebrations of the sabbats and ceremonies of Drawing Down the Moon, Cakes and Wine. Over the years individuals have from time to time claimed to be the owners of ancient Books of Shadows, "passed down through the family," yet most have proven to be adulterated versions of the Gardner book. This led many to suspect that there never was an "original" Book of Shadows, as used by the Clutterbuck coven. But Doreen Valiente herself went to much trouble researching and investigating the existence of Dorothy Clutterbuck and the circumstances described by Gardner regarding his initiation, and she found that there was sufficient evidence to support Gardner's claims.

Feedback
Flashcards & Bookmarks ?
Please log in or register to use Flashcards and Bookmarks. You can also log in with
Flashcards ?
My bookmarks ?
+ Add current page to bookmarks
Mentioned in ?
References in periodicals archive ?
I wrote three other novels before Book of Shadows. You have to learn to withstand the agony of rejections and just keep going.
BOOKS: AUTHOR'S NOTES FROM WALES; Paula Brackston from Talybont-on-Usk had come to terms with rejection. She wrote three novels before her fourth, the tale of a witch through the ages, cast a spell on publishers
And for the 25,000 young and young-at-heart who attended there was live music from the likes of Book of Shadows, Funhouse and girl group Dragonheart.
Tall stories a feature on the waterfront
"Blair Witch 2: Book of Shadows," which test $15 million to make, earned just $47 million worldwide.
Will fact-fiction tease hold 'Water'?
This week, Paige tries to use the Book of Shadows to help her colleagues - but fails to foresee the disastrous consequences of her actions.
Telly: Spell-binder that eventually works its magic
The original micro-budgeted fright fest scooped more than pounds 200 million in 1999, although the 2000 follow up, Book Of Shadows directed by Joe Berlinger, flopped after a string of terrible reviews.
Film: Out takes
But the subject list reads like the syllabus at Hogwarts School in the Harry Potter books - including Spell Casting, Divination, Spirits, Gods and Goddesses, The Book of Shadows and Moon Magic.
Witches to get grants to study sorcery; EXCLUSIVE
The Book of Shadows: The Unofficial Charmed Companion by N E Genge (Boxtree, pounds 9.99)
BOOKS: Book of Shadows leaves us in the dark
Battlefield was well ahead of competitors Book of Shadows: Blair Witch 2 and The Next Best Thing on the foundation's worst-of-2000 list.
Travolta's Raspberry flop
Book of Shadows: Blair Witch 2 Artisan Entertainment
LICENSES RECENTLY GRANTED
The new Alice In Wonderland Book Of Shadows eye makeup palette (supplied by HCT) is a perfectly designed packaging interpretation of the story with its pop-up scene and fantastical illustrations.
Is this just fantasy? Move over stylish simplicity, a new raw, potent and powerful product and packaging expression is coming through
Other highlights of this year's event include trips on the Barry Steam Railway, aromatherapy and massage exhibitions, fairground rides, live music from Celtic folk group Mabon, Book of Shadows, Funhouse, and Dragonheart.
SAILING HOME
Departing from the sheepish homevid approach of other franchise duds like "Batman & Robin" or "Book of Shadows: Blair Witch 2," Fox decided to embrace the chaos that swirled around the last two "Alien" installments.
'Alien' set is out of this world: Fox recuts all four pix to bolster DVD appeal