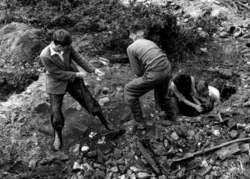 Borley Rectory has been described as “the most haunted house in England.” Situated not far from Manningtree, Essex, it was the home of the notorious seventeenth century “Witchfinder General” Matthew Hopkins.

Mysterious lights were frequently seen in the windows of Borley Rectory, writing would appear on the walls, stones were thrown about, and strange noises were heard. There was even a phantom coach and horses that drove about the property. The neighboring Borley Church also had its share of hauntings, though not as spectacular as those at the rectory. The church had phantom organ music, ghostly chanting, and the ghost of a nun moving about the churchyard.

The Reverend Henry Bull built the rectory in 1863. Bull’s son Harry took over as rector after his father’s death. Harry had a great interest in Spiritualism, and it has been suggested that this is a reason for the proliferation of ghostly phenomena there. From small beginnings, the hauntings and poltergeist activity grew more and more involved. By the 1930s, several years after the death of the younger Bull, they were spectacular. By that time the poltergeist phenomena were centered around Marianne Foyster, wife of the then-resident rector. Objects were thrown at her, furniture was violently moved, bells rang, and door-knockers banged. Pencil scrawls appeared on walls asking for prayers for the ghosts.

Psychical researcher Harry Price (1881–1948) carried out the main investigation of Borley and later authored two books on the subject. Price founded the National Laboratory of Psychical Research and he was also a foreign research officer for the American Society for Psychical Research. Price’s methods of investigating were harshly criticized in some quarters. As much from local legends as from any hard evidence, Price pieced together a story of illicit love in the fourteenth century, with the murder of a nun taking place on the site of the rectory. The ghostly happenings apparently connected to this early tale began to take place shortly after the Reverend Mr. Bull built the house. They slowly grew in intensity when his son Harry succeeded him as rector.

Local residents swore they had seen a phantom coach being driven past the church, and a girl dressed in white at a window of the rectory. There were sounds of dragging footsteps and of bells clanging. A phantom nun was seen in the churchyard.

The Reverend G. E. Smith and his wife moved into the house in 1929 but did not stay long due to the hauntings. They were succeeded by the Reverend Mr. Foyster and his wife Marianne. The Foysters were familiar with the stories connected with the rectory, and it seems Marianne took a special interest in Harry Price and his investigations. It has even been suggestedthat she was in cahoots with Price in fabricating some of the phenomena, though this has never been proven. In any case, she did seem to promote the haunting. Much of the poltergeist activity centered around her and took place when no one else was present or when no one was able to control the circumstances in any way. In 1935, the Foysters left the rectory and things quieted down. Two years later Price himself rented the house for a year.

Price called in “observers” to help him in his investigations. There was little for them to observe, for nothing much happened. Not long after Price had vacated, a Captain Gregson took possession. At that time a fire gutted the building. Rather than laying the ghosts, the fire brought about a whole new interest. Tourists flocked there and swore they saw figures at the windows of the empty building. A photograph was published that shows a brick which, allegedly, flew up from the ground and stayed suspended in space while the photograph was taken.

After Price’s death in 1948, the Society for Psychical Research appointed a panel to investigate his investigations. They were extremely critical, stopping just short of calling Price a fraud and accusing him of creating all the phenomena himself. They apparently ignored the fact that there had been haunting at the rectory, and on its site, long before Price started looking at the place. A more recent investigation was conducted by the society’s R. J. Hastings, whose review was much more restrained and less personal than the previous attack on Price. Acknowledging Price’s apparent need for publicity and the amateurishness of some of his investigations, Hastings did conclude that there was no evidence of outright fraud on the part of Price.

Because Borley Rectory has long since been razed, it is now too late for a proper look into all that might have happened there. But from the many years of stories—true or false—the rectory will forever be remembered as “the most haunted house in England.”

Feedback
Flashcards & Bookmarks ?
Please log in or register to use Flashcards and Bookmarks. You can also log in with
Flashcards ?
My bookmarks ?
+ Add current page to bookmarks
Mentioned in ?
References in periodicals archive ?
1939: Britain's most haunted house, Borley Rectory, was destroyed by fire.
On this day..
1939: Britain's allegedly most haunted house, Borley Rectory in Essex, was destroyed by fire.
IT HAPPENED ON THIS DAY
Arundel Castle, Arundel, South Downs, West Sussex; Borley Rectory, Borley, Essex; Bruce Castle, Lordship Lane, Tottenham, London; Castle Ludge, Ludlow, Shropshire; Chingle Hall, Whittingham, Preston, Lancashire; Corpus Christi College, Cambridge; Cumnor Manor, Cumnor, Oxfordshire; Dacre Castle, Dacre, Cumbria; Hampton Court Palace, London; Littledean Hall, Littledean, Gloucestershire; Newstead Abbey, Nottinghamshire; Old Bailey, London; Peterhouse College, Cambridge; Temple Newsam, Leeds, West Yorkshire; Windsor Castle, London (England);
Ghosts: illusion or reality?
Harry Price: Ghost Hunter Rafe Spall, left stars as famous real-life ghost hunter and sceptic who is best known for his study on England's "most haunted house" Borley Rectory.
this week Top 10; saturdaytv Your seven-day TV guide starts here Take a look at our pick of the best shows on the small screen
Borley Rectory in Essex is known as the most haunted house in England.
We love a fascinating fact Did you know... FAB FACTS
The film, set in 1937, follows paranormal investigator Harry Price as he leases the old Borley Rectory, England's most haunted house, and returns to face the spirits that lay dormant for decades.
Derrick Damions Cast in the Rectory
2 BORLEY RECTORY, Essex THE stories of Borley Rectory mainly come from the work of famous 18th century ghost hunter Harry Price.
Simply spooktacular British breaks; Looking for a day out with a difference? Check out the nation's top 10 haunted hotspots
And the sheer quality throughout is such that, as well as those already mentioned, it would be easy to pick out as many houses again of equal individual interest, such as the Yellow Peril, Borley Rectory, the mysterious Japanese House--whose history is completely unknown --and the lovingly restored Throstle's Nest.
Model dwellings: a handsomely kept collection of Georgian and Victorian dolls' houses delights
Googling a runner Borley Ghost 3.00 Beverley Borley Rectory in Essex, burned down in 1939, was reputed to be the UK's most haunted house.
HORSE PLAY; Just for the fun of it
1939: Borley Rectory, Britain's most haunted house, was burnt down: A new tenant had just moved into Borley Rectory near Sudbury, in Essex, when it burnt to the ground.
On This Day
Similarly, the entry on the haunting of Borley Rectory mentions the critique by Hall, Dinwall, and Goldney, but conveniently omits any mention of Robert Hastings' counter-critique, or of the subsequent debate.
Dizionario del Paranormale
" Although Price is seen debunking matters in this drama, he did believe in ghosts, particularly after conducting a lengthy investigation into Borley Rectory, a property in Essex he dubbed 'the most haunted house in England.'.' Spall, however, claims he has never had a supernatural experience - although at least one member of his family finds the subject fascinating.
It wouldn't be Christmas without a haunting; But this one's based on a real-life ghost hunter