When a gas of bosonic particles is cooled below a critical temperature, it condenses into a Bose-Einstein condensate. The condensate consists of a macroscopic number of particles, which are all in the ground state of the system. Bose-Einstein condensation is a phase transition, which does not depend on the specific interactions between particles. It is based on the indistinguishability and wave nature of particles, both of which are at the heart of quantum mechanics.

In a simplified picture, particles in a gas may be regarded as quantum-mechanical wavepackets which have a spatial extent on the order of a thermal de Broglie wavelength, given by Eq. (1),

where T is the temperature, m the mass of the particle, kB is the Boltzmann constant, and &planck; is Planck's constant divided by 2&pgr;. The wavelength λdB can be regarded as the position uncertainty associated with the thermal momentum distribution of the particles. At high temperature, λdB is small, and the probability of finding two particles within this distance of each other is extremely low. Therefore, the indistinguishability of particles is not important, and a classical description applies (namely, Boltzmann statistics). When the gas is cooled to the point where λdB is comparable to the distance between particles, the individual wavepackets start to overlap and the indistinguishability of particles becomes crucial—an identity crisis can be said to occur. For fermions, the Pauli exclusion principle prevents two particles from occupying the same quantum state; whereas for bosons, quantum statistics (in this case, Bose-Einstein statistics) dramatically increases the probability of finding several particles in the same quantum state. The system undergoes a phase transition and forms a Bose-Einstein condensate, where a macroscopic number of particles occupy the lowest-energy quantum state (Fig. 1). See Boltzmann statistics

Bose-Einstein condensation can be described intuitively in the following way: When the quantum-mechanical wave functions of bosonic particles spatially overlap, the matter waves start to oscillate in concert. A coherent matter wave forms that comprises all particles in the ground state of the system. This transition from disordered to coherent matter waves can be compared to the step from incoherent light to laser light. Indeed, atom lasers based on Bose-Einstein condensation have been realized. See Coherence, Laser

The quest to realize Bose-Einstein condensation in a dilute weakly interacting gas focused on atomic gases. At ultralow temperatures, all atomic gases liquefy or solidify in thermal equilibrium. Keeping the gas at sufficiently low density can prevent this from occurring. Typical number densities of atoms between 1012 and 1015 cm3 imply transition temperatures for Bose-Einstein condensation in the nanokelvin or microkelvin regime.

The realization of Bose-Einstein condensation in atomic gases required techniques to cool gases to such low temperatures, and atom traps to confine the gases at the required density and keep them away from the much warmer walls of the vacuum chamber. The experiments on alkali vapors (lithium, rubidium, and sodium) use several laser-cooling techniques as precooling, then hold the atoms in a magnetic trap and cool them further by forced evaporative cooling. For atomic hydrogen, the laser-cooling step is replaced by cryogenic cooling.

In superconductors and liquid helium, the existence of coherence and of a macroscopic wave function is impressively demonstrated through the Josephson effect. In the dilute atomic gases, the coherence has been demonstrated even more directly by interfering two Bose condensates (Fig. 2). The interference fringes typically have a spacing of 15 μm, a huge length for matter waves. (In contrast, the matter wavelength of atoms at room temperature is only 0.05 nm, less than the size of the atoms.) 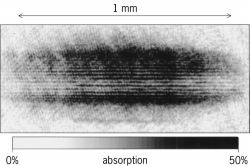 Interference pattern of two expanding condensates, demonstrating the coherence of Bose-Einstein condensates
McGraw-Hill Concise Encyclopedia of Physics. © 2002 by The McGraw-Hill Companies, Inc.
The following article is from The Great Soviet Encyclopedia (1979). It might be outdated or ideologically biased.

a quantum phenomenon in a system of bosons which consists of the fact that at a temperature below a certain critical value (called the degeneration temperature), a portion of the particles is aggregated in a state with zero momentum (if the system as a whole is at rest). The term “Bose-Einstein condensation” is created by analogy with the condensation of molecules of a vapor into a liquid upon cooling. However, condensation in the ordinary sense does not take place; the distribution of particles in space remains as before, and it is a matter of “condensation in momentum space.”

The degeneration temperature for the overwhelming majority of gases is very low, and the substance passes into the solid state long before Bose-Einstein condensation can set in. The exception is helium, which at T = 4.2° K (under normal conditions) passes into the liquid state and remains a liquid down to temperatures very close to absolute zero. At T = 2.18° K, liquid 4He passes into a special, so-called superfluid state, whose emergence is connected with Bose-Einstein condensation.

[¦bōz ¦īn‚stīn kän·den′sā·shən]
(cryogenics)
A phase transition that occurs when a gas of bosonic particles is cooled below a critical temperature very close to absolute zero, in which a large number of the particles come to occupy the ground state of the system and form a coherent matter wave.
McGraw-Hill Dictionary of Scientific & Technical Terms, 6E, Copyright © 2003 by The McGraw-Hill Companies, Inc.

Feedback
Flashcards & Bookmarks ?
Please log in or register to use Flashcards and Bookmarks. You can also log in with
Flashcards ?
My bookmarks ?
+ Add current page to bookmarks
Mentioned in ?
References in periodicals archive ?
Stringari, "Theory of Bose-Einstein condensation in trapped gases," Reviews of Modern Physics, vol.
Self-Similarity Analysis of the Nonlinear Schrodinger Equation in the Madelung Form
To obtain the Bose-Einstein condensation in the gas of this metal, for which it is characteristic that at practically low final temperature practically all the atoms (molecules) entering it make up one energy level corresponding to their zero momentum (the amount of motion) The experimenters <<captured>> the atoms of the alkaline chemical element rubidium Rb with <<magnetic traps,>> and then by their (atoms) super-deep cooling (to temperatures of the order of 10-5 K) the <<web>> of laser beams slowed down their motion [15].
An anthology of the distinguished achievements in science and technique. Part 37: Nobel Prize Laureates in physics For 2000-2004
Stringari, Bose-Einstein Condensation, Oxford University Press, New York, NY, USA, 2003.
Bose-Einstein Condensate Dark Matter Halos Confronted with Galactic Rotation Curves
Experimental realization of such situation is, for instance, Bose-Einstein condensation at constant temperature by increasing the particle number of the system [76] and injection of electrons into low-dimensional systems.
Thermodynamics of Low-Dimensional Trapped Fermi Gases
Markowich, "Numerical solution of the Gross-Pitaevskii equation for Bose-Einstein condensation," Journal of Computational Physics, vol.
A Space-Time Fully Decoupled Wavelet Galerkin Method for Solving Multidimensional Nonlinear Schrodinger Equations with Damping
Smith, Bose-Einstein Condensation in Dilute Gases, Cambridge University Press, Cambridge, Mass, USA, 2008.
Dynamics and matter-wave solitons in bose-einstein condensates with two- and three-body interactions
of Timisoara, Romania) offers a unitary treatment of the main actual theories of matter: the Density Functional Theory for fermions, the Bose-Einstein Condensation for bosons, and the Chemical Bonding as a special realization of the first two in the so called mixed fermionic-bosonic states.
Quantum theory; density, condensation, and bonding
The Bose-Einstein condensation (BEC) has a wide application for investigation of superconductivity of metals and superfluidity of liquids.
Ultracold Fermi and Bose gases and spinless Bose charged sound particles
Bose-Einstein condensation, in which atoms lose their individual identity and begin to move as a collective quantum mass, was indeed observed experimentally for the first time in 1995 in supercooled rubidium atoms.
Superfluid's roots
It is now used in areas ranging from basic science such as Bose-Einstein condensation, all the way to devices with real-world impacts such as atomic clocks and navigation instruments," DeMille said.
Scientists Using Lasers to Cool, Control Molecules
Following an opening lecture reviewing Einstein's contributions to science in his Annus Maribilis, the remaining lectures discuss Einstein's work on light quanta, the relevance of Einstein to current debates in cosmology, the properties of neutron stars and black holes, the nature of dark matter and dark energy, the possible contributions of string theory to Einstein's hoped-for unified theory of nature, and the work of Satyendra Nath Bose on Bose-Einstein condensation, among other topics.
Remembering Einstein; lectures on physics and astrophysics
The observation of Bose-Einstein condensation in atomic traps (6) has also led to increased recent interest in atom optics, e.g., to study the momentum distribution and coherence of the condensates (17,28).
Diffractive optics from self-assembled DNA