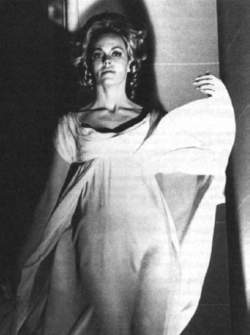 Lara Parker as Angelique Bouchard in the original Dark Shadows.

Angélique Bouchard (Lara Parker), the other vampire who appeared on the Dark Shadows television series, was introduced during the episodes that told the story of Barnabas Collins‘s origin in the 1790s. Barnabas had been engaged to marry a woman named Josette du Prés. Angélique, a witch, decided that she wanted him enough to interfere with the wedding by casting a spell on Josette that would cause her to fall in love with Jeremiah Collins, Barnabas’s uncle. Angélique’s actions did not win Barnabas to her, but it did lead to his killing his uncle in a duel. Angry and frustrated, Angélique unleashed a curse on Barnabas. Shortly thereafter a bat attacked him and he emerged from the encounter as a vampire. Angélique was the first person seen by the new vampire and her magical skill could not prevent her from becoming his initial victim.

Barnabas’s vampirism would soon lead to his confinement in the Collins family crypt in New England for two centuries. He was released in the late 1960s and in 1969, Angélique again entered Barnabas’s life as Cassandra Collins, the wife of Roger Collins. At this point, Barnabas had been temporarily cured of his vampirism. His brief return to mortality was interrupted by the arrival of Nicolas Blair, who claimed to be Cassandra’s brother. His first encounter with Blair, a warlock, led to a new attack by a bat. As a result Barnabas did not become a vampire, but did fall under Blair’s power. Cassandra was killed; however, Blair raised her as a vampire. Like Barnabas, Angélique was a nocturnal creature with prominent fangs, who could be killed by fire, daylight, and a heartfelt stake. She eventually became the instrument of Barnabas’s return to the vampiric life. After she bit him, he again became a vampire at the cost of temporarily transferring his allegiance away from Blair to her. Angélique’s life as a vampire soon ended, but death is always a temporary matter for the magical creature.

Angélique was resurrected in 1998 in a novel written by Lara Parker, the actress who played her in the original series. The book traces Angélique’s early life on Martinique in more depth than allowed by the series and covers early events in her life that turned her first to witchcraft and evil, and the attempts she made to escape her fate. The plot covers in depth the background to events mentioned in the TV show. In the novel, Parker describes the circumstances leading to the meeting between Angélique and Barnabas Collins, a soldier with whom she falls in love. As he heads off to war, he promises to wed her upon his return. Instead, he becomes engaged to her friend Josette. And Barnabas learns the consequences of spurning a witch.

This first novel received enough positive attention as to allow Parker to write other “Dark Shadows” titles, though they did feature Angélique.