A system of particles is said to be in a bound state if the relative motion of the particles occurs in a bounded region of space (is finite) over a period that is long compared with the periods characteristic of the given system. Nature offers many examples of bound states—from star clusters and macroscopic bodies to such very small entities as atoms, molecules, and atomic nuclei. Many of the particles often referred to as elementary may actually be bound states of other particles.

To form a bound state, attractive forces must exist between at least some particles of the system at certain distances between the particles. For stable bound states, the mass of the system is less than the sum of the masses of the constituent particles. The difference Am determines the binding energy of the system: Ebinding = Δmc2, where c is the speed of light in a vacuum.

Bound states are described in classical mechanics by finite solutions of the equations of motion of the system, where the trajectories of all particles in the system are concentrated in a bounded region of space. An example is Kepler’s problem of the motion of a particle or planet in a gravitational field. In classical mechanics a system of two attracting particles can always form a bound state. If the region of distances at which particles are attracted is separated by a potential barrier from the region in which the particles repulse each other (see Figure 1), then the particles can also form stable bound states if their motion obeys the laws of classical mechanics.

In quantum mechanics, in contrast to classical mechanics, the formation of a bound state of particles requires that the potential 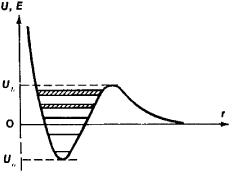 energy of attraction and the range of the forces be sufficiently great (seePOTENTIAL WELL and ZERO-POINT ENERGY). Moreover, in a potential well of the type illustrated in Figure 1, particles can escape from the region of attraction through the tunnel effect. Thus, stable bound states are not formed if the energy of a particle is greater than the potential at infinity. If, however, the probability of tunneling through the barrier is small (at the classical limit it is equal to zero), then a particle can be located in such a potential well for a period that is long compared with the periods of motion in the well. For this reason, in addition to stable bound states there exist unstable bound states, which decay with time; such states are said to be metastable or quasi-stable. The nuclei of some heavy elements, for example, are unstable bound states with respect to alpha decay or fission.

In the extremely relativistic case, where the binding energy of the system is comparable to the rest energy of the particles in the system, the solution of the bound-state problem requires the use of quantum field theory. Present-day quantum field theory is not able to provide an exact solution to this problem. Some of the approximate methods being developed permit the consideration of stable and unstable “elementary” particles, including resonance particles, in an identical manner. According to some hypotheses, all hadrons, or all strongly interacting particles, are bound states of more fundamental particles of matter called quarks.

Feedback
Flashcards & Bookmarks ?
Please log in or register to use Flashcards and Bookmarks. You can also log in with
Flashcards ?
My bookmarks ?
+ Add current page to bookmarks
Mentioned in ?
References in periodicals archive ?
Klaus, "On the bound state of Schrodinger operators in one dimension," Annals of Physics, vol.
A Note on the Asymptotic and Threshold Behaviour of Discrete Eigenvalues inside the Spectral Gaps of the Difference Operator with a Periodic Potential
In addition to harmonic mode-locking and bound states, there is another multiple-pulse operation state in dissipative soliton fiber lasers.
Three multiple-pulse operation states of an all-normal-dispersion dissipative soliton fiber laser
In the early 1960's, just after the discovery of the [LAMBDA](1405) resonance, (48,49) following the prediction of a [K.sup.-]p quasi-bound state by Dalitz and Tuan,50) Nogami investigated the possible existence of [bar.K]NN bound states, and claimed that [K.sup.-]pp may exist as a bound state with a binding energy of B([K.sup.-]pp) = 11.5MeV.
Strong binding and shrinkage of single and double [bar.K] nuclear systems ([K.sup.-]pp, [K.sup.-]ppn, [K.sup.-][K.sup.-]p and [K.sup.-][K.sup.-]pp) predicted by Faddeev-Yakubovsky calculations
In this forbidden region, the emission of a photon from a qubit, constructed by an excited two-level atom, is inhibited, so a photon-atom bound state [5] is formed when the qubit interacts with its surrounding reservoir strongly.
Dynamics of the energy relaxation and decoherence of a photon-atom bound state in an anisotropic photonic crystal
We have recently derived this equation for a viscous thin film coating a vertical fibre to obtain a theoretical insight into the interaction of the droplike pulses and formation of bound states observed in that system (Duprat et al., 2009).
Interaction of solitary pulses in active dispersive-dissipative media/Uksikimpulsside interaktsioon aktiivsetes dispergeeruvates ja dissipeeruvates keskkondades
In this case, there could be no "additional" bound state. If in this experiment it would be possible to establish an experimental upper limit on the energy shift [DELTA][E.sub.n] it would impose an upper limit on [[alpha].sub.G] for a repulsive interaction [9]:
Constraints on non-Newtonian gravity from the experiment on neutron quantum states in the Earth's gravitational field
By applying algebraic means to (29), we obtain the DKP bound state energy levels equation for the Hellmann potential as follows:
Approximate Scattering State Solutions of DKPE and SSE with Hellmann Potential
The transition rate depends on the overlap between the ground state wavefunction for a low energy collision and the excited bound state wavefunction.
A spectroscopic determination of scattering lengths for sodium atom collisions
When conducting electrons in silicon drop to a lower-energy, bound state, the excess energy is converted into phonons, or vibrations of the crystal lattice, rather than photons.
The mod couple: wedding silicon and germanium for speed and light
In this work, we search the bound state solutions of the generalized Hultheen potential which can be written also in a complex form identifying the PT-symmetric case in a closed form for the case where the mass depends on spatial coordinate and extend the Dirac equation including the scalar, vector, and pseudoscalar interaction terms to this case.
Solution of Effective-Mass Dirac Equation with Scalar-Vector and Pseudoscalar Terms for Generalized Hulthen Potential
According to sources, the Congress is yet to discuss the seat sharing with the JD- U and RJD leaders but a party panel has identified around 75 seats in the poll- bound state.
CONG YET TO FINALISE SEAT DEAL