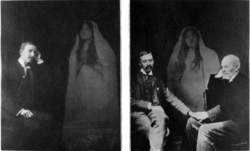 As a nineteen-year-old photographer in Fleet Street, London, Richard Boursnell was frustrated when unexplained markings began to appear on his photographic plates when the pictures were developed. His partner was unhappy at the expense and accused him of not cleaning the plates properly. This eventually led to the two parting company. Boursnell had no idea how the markings got on the plates, and decided to stop working in photographic processing. He kept to that decision for forty years.

In 1891, Boursnell returned to photography and again had unexplained markings on his photographic plates. This time they were not abstract but distinctive forms. He had no idea where the extra figures were coming from and destroyed so many plates that it almost put an end to his business. Then William T. Stead, a well known Spiritualist and automatist, saw the photographs and persuaded Boursnell to take pictures under conditions that he, Stead, specified. Many spirit forms began to appear in the photographs that Stead referred to as “shadow pictures.” At first they were not recognizable but later they were. Stead wrote: “I (repeatedly) sent friends to Mr. Boursnell giving him no information as to who they were, nor telling him anything as to the identity of the person’s deceased friend or relative whose portrait they wished to secure, and time and again when the negative was developed, the portrait would appear in the background, or sometimes in front of the sitter.”

In 1903, the Spiritualists of London presented Boursnell with a testimonial signed by a hundred representative Spiritualists together with a purse of gold, to show their high esteem of him and his work. The walls of the Psychological Society, where the presentation took place, were hung with three hundred chosen photographs of spirit “extras” taken by Boursnell.