(brākēŏp`ədə), phylum of shelled sessile or sedentary marine animals, commonly known as lamp shells, and characterized by a peculiar feeding organ, the lophophore. The shell consists of two parts, called valves, that completely enclose the body; the external appearance of the animal is much like that of a bivalve mollusk, or pelecypod, such as a clam. However, the valves of a lamp shell cover the top and bottom of the animal, while those of a clam cover the right and left sides. Furthermore, the internal anatomy of brachiopods does not resemble that of pelecypods; the two groups are not related. There are two classes in the phylum: the Inarticulata, members of which have the valves held together by muscles alone, and the Articulata, members of which have interlocking processes that form a hinge. A complex set of muscles opens the shell for feeding and closes it for protection. In most brachiopods a short stalk called a pedicel, or peduncle, emerges between the valves or through an opening in the lower valve. Most sessile brachiopods attach to objects by means of the pedicel, but a few lack pedicels and attach directly by the ventral valve. Burrowing lamp shells have long pedicels, which they contract to retreat into the burrow. The lophophore consists of two tentacle-bearing arms, often spirally coiled, one on either side of the mouth. The tentacles have cilia that create currents, drawing water-bearing food particles and oxygen into the shell. Food particles are trapped in mucus on the tentacles and moved by the cilia to the mouth. Oxygen is absorbed through the body wall. Brachiopods have a simple digestive and nervous system, and are equipped with excretory organs called nephridia. The open circulatory system includes a contractile vessel, or heart, and sinuses for the flow of the colorless circulatory fluid to various parts of the body. Reproduction is sexual and the sexes are usually separate. In most species the eggs and sperm are shed into the sea, where fertilization results in the development of free-living, ciliated larvae. The larvae settle to the bottom after developing rudiments of the adult structures. A few species brood their young. Brachiopods are believed to be related to the shell-less bryozoans, or moss animals (phylum EctoproctaEctoprocta
, phylum of sessile, colonial aquatic animals (commonly known as moss animals or oryonzoans). The zooids, or individual members of a colony, are microscopic, but colonies may grow up to 1 ft (30 cm) or more in diameter.
..... Click the link for more information. ), which also have a lophophore. Abundant at the start of the Cambrian period, brachiopods were widespread and numerous in ancient seas. About 12,000 extinct species are known, and members of the largest species were almost 1 ft (30 cm) in diameter. Fewer than 325 species are extant today, and these are relatively small, usually 1 to 2 in. (2.5–5 cm) across. All are marine and most prefer shallow water; they are sporadically distributed, although some are very abundant locally. Among the better known lamp shells are the burrowing Lingula (class Inarticulata) and the stalkless, sessile Crania (class Articulata).
The Columbia Electronic Encyclopedia™ Copyright © 2013, Columbia University Press. Licensed from Columbia University Press. All rights reserved. www.cc.columbia.edu/cu/cup/

A phylum of solitary, exclusively marine, coelomate, bivalved animals, with both valves symmetrical about a median longitudinal plane. They are typically attached to the substrate by a posteriorly located fleshy stalk or pedicle. Anteriorly, a relatively large mantle cavity is always developed between the valves, and the filamentous feeding organ, or lophophore, is suspended in it, projecting forward from the anterior body wall (see illustration). 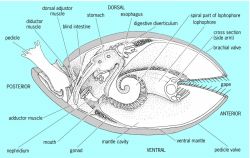 The principal organs of a brachiopod as typified by Terebratulina

There are two clearly defined groups within the phylum, a division that is particularly marked if only Recent animals are considered. These two groups are regarded as classes; several names have been given to them, but Inarticulata and Articulata are the most widely used and are based on one of the most readily observed differences between them, the presence or absence of articulation between the two valves of the shell. Among the Articulata the valves are typically hinged together by a pair of teeth with complementary sockets in the opposing valve; these hinge teeth are lacking in the Inarticulata, whose valves are held together only by the soft tissue of the living animal. The phylum is currently classified into the following groups:

The pedicle is the only organ protruding outside the valves, while the remainder of the animal is enclosed in the space between them. This space is divided into two unequal parts, a smaller posteriorly located body cavity and an anterior mantle cavity. The two mantles approach each other and ultimately fuse along the posterior margin of articulate brachiopods; in contrast, the mantles are invariably discrete in the inarticulates and are separated by a strip of body wall.

The body cavity contains the musculature; the alimentary canal; the nephridia, which are paired excretory organs also functioning as gonoducts; the reproductive organs; and primitive circulatory and nervous systems. Except for the openings through the nephridia, the body cavity is enclosed, but the mantle cavity communicates freely with the sea when the valves are opened. The lophophore is suspended from the anterior body wall within the mantle cavity and is always symmetrically disposed about the median plane. The lophophore consists of a variably disposed, ciliated, filament-bearing tube, with the ciliary beat producing an ordered flow of water within the cavity, flowing across the filaments. The latter trap food particles which are carried along a groove in the lophophore to the medially situated mouth.

All modern brachiopods are marine, and there is little doubt from the fossil record that brachiopods have always been confined to the sea. Recent brachiopods occur most commonly beneath the relatively shallow waters of the continental shelves, which seems to have been the most favored environment, but the bathymetric range of the phylum is large. A few modern species live intertidally and, at the other extreme, a limited number have been dredged from depths of over 16,000 ft (5000 m).

The majority of brachiopods form part of the sessile benthos and are attached by their pedicle during postlarval life. Glottidia and Lingula are exceptional in being infaunal and making burrows. A commoner modification involves loss of the pedicle, either complete suppression or atrophy early in the life history of the individual. Such forms either lie free on the sea floor, are attached by cementation of part or all of the pedicle valve, or are anchored by spines. The geographic distribution and geological setting of some fossil species suggest that they may have been epiplanktonic, attached to floating weed, but such a mode of life is unknown in modern faunas.

a phylum of sessile marine invertebrates. The body is covered on both the ventral and dorsal sides by a bivalve calcareous shell, which, in extant forms, reaches 10 cm in length. The posterior ends of the valves are joined by special processes of the hinge or only by muscles. The stalk serves to attach the animal to the bottom. The body is located in the posterior portion of the shell. A mantle lines the anterior portion, which is occupied by a pair of long appendages, or arms, having ciliated tentacles. The cilia produce a constant ingoing current, delivering food particles and oxygen to the mantle cavity. The mouth lies at the base of the arms; in some species, the intestine ends blindly. The secondary body cavity, or coelom, is spacious. The blood system consists of a heart and a number of vessels, and the nervous system is represented by circumoesophageal connectives and nerves. The sexes are separate. Development is through metamorphosis: a free-swimming larva quickly attaches itself to the substrate, where it is transformed into a young individual.

There are approximately 200 extant species of brachiopods. The number of fossil species, mainly Paleozoic, may be as high as 7,000. The oldest brachiopods are from the Cambrian. The invertebrates flourished in the Ordovician and Devonian, at which time there were seven or eight orders. Some of the orders became extinct at the onset of the Upper Paleozoic. During the Carboniferous and Permian periods, Productida and Spiriferida were prevalent. A number of brachiopods became extinct shortly before and during the early Mesozoic. Four orders exist today. Brachiopods have great importance in the stratigraphy of the Paleozoic.

Feedback
Flashcards & Bookmarks ?
Please log in or register to use Flashcards and Bookmarks. You can also log in with
Flashcards ?
My bookmarks ?
+ Add current page to bookmarks
Mentioned in ?
References in periodicals archive ?
Warm shallow water is considered suitable for growth of benthic foraminifera, brachiopods, and bryozoans while green algae exist in the shallow lagoon or lacustrine setting (Flugel, 2013).
Diagenetic History and Microfacies Analysis of Upper Permian Wargal Limestone in the Central Salt Range, Pakistan
Previous significant contributions to the knowledge of the Lower Jurassic Ibero-Levantine brachiopods were scarce, e.g.
Lower Jurassic brachiopods from the Ibero-Levantine sector (Iberian Range): faunal turnovers and critical bioevents
Thus, the objectives of this study were to make accessible data on the abundances of sipunculans, brachiopods and hemichordates (1984-1987, 2013) at a sand-mud flat; and on trace metals (1996, 2000) and abundances (2015) of sipunculans and brachiopods at a sand flat in the upper Gulf of Nicoya estuary.
Braquiopodos, sipunculidos, enteropneustos y metales en dos planicies estuarinas de marea, Pacifico, Costa Rica
The living phoronid worms are a phylum closely related to the brachiopods. Like the brachiopods, they are filter-feeders using a ring of ciliated tentacles called a lophophore.
The fossil record of the Cambrian "explosion": resolving the tree of life
Predominant fossils are only some clasts of brachiopods and bivalves.
MICROFACIES AND DIAGENETIC ANALYSIS OF AMB FORMATION WESTERN PART OF CENTRAL SALT RANGE, PAKISTAN
The reproductive biology of brachiopods has been reviewed (i.e., James et al., 1992), with most species being gonochoristic and having 2 to 4 gonads occupying the mantle canals, or sinuses (vascula genitalia) (James et at., 1992).
Reproduction and growth of the terebratulid brachiopod Liothyrella Neozelanica Thomson, 1918 from doubtful sound, New Zealand
Specimens of another 5 species--Terebratulina crossei, Laqueus rubellus, Laqueus blanfordi, Terebratalia coreanica, and Platidia japonica--belonging to articulated brachiopods (Terebratulida) were obtained from fisherman using gill nets at a depth of approximately 100 m in Okirai Bay, Iwate, Japan, in February 2010.
First extensive examination of genome size in phylum brachiopoda (Lamp Shells) collected from Japan
Several reports have been concerned with the palaeontology of foraminifera, corals, brachiopods, conodonts and cephalopods of the Ali Bashi Formation and formations from the same stage in Alborz and Abade.
Late Permian brachiopoda fauna in north-western Iran
Brachiopods dominated many undersea communities at that time.
Fossil forensics: identifying an undersea creature from what isn't there
They are generally associated with benthic organisms such as brachiopods and mollusks as seen in SML (Plate1: L).
Microfaunal Assemblage of the Sui Main Limestone from Sui Gas Field, Pakistan
Brachiopods are numerous and well preserved there, making them an ideal group of animals to test the link between abundance and extinction.
Numbers 'don't always guard against extinction risk'
The phosphatized examples, in contrast, are elongate to round in outline and variably 'segmented' or spiriform; one specimen contains numerous brachiopod shell fragments and was clearly produced by a predator or scavenger.
Great Canadian Lagerstatten 2. Macro- and microfossils of the Mount Cap Formation (Early and Middle Cambrian, northwest territories)