a condition determining the position of the interference maximums of X rays that are scattered by a crystal without a change in wavelength. The Bragg-Vul’f condition was established independently in 1913 by two scientists, the Englishman W. L. Bragg and the Russian G. V. Vul’f, shortly after the German scientist M. von Laue and his colleagues discovered the diffraction of X rays. According to the Bragg-Vul’f theory, the maximums arise upon the reflection of X rays from a system of parallel crystallographic planes when the beams reflected by the various planes in the parallel system have a path difference equal to 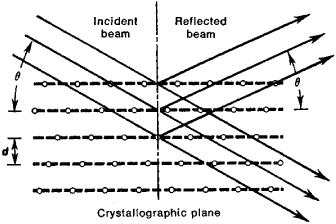 a whole number of wavelengths. The Bragg-Vul’f condition may be expressed as follows:

where d is the distance between planes, θ is the Bragg angle (the angle between the reflecting plane and the incident beam), λ is the wavelength of the X radiation, and m is the so-called order of reflection, which is a positive whole number (see Figure 1).

The Bragg-Vul’f condition is fulfilled in cases of the scattering by crystals not only of gamma rays but also of X rays, as well as the diffraction of electrons, protons, and neutrons.