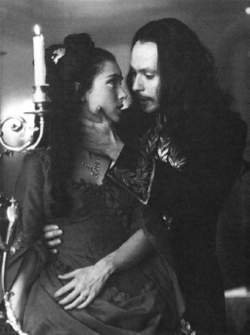 The most recent of the many attempts to bring the novel Dracula, by Bram Stoker, to the motion picture screen appeared in 1992 from Columbia Pictures. Directed by one of Hollywood’s top directors, Francis Ford Coppola, it opened on Friday, November 13, and became the largest non-summer movie opening of all time.

Coppola had a goal of making a more accurate version of Stoker’s original novel, and his version relied more closely on the storyline of the book than any previous Dracula movie. The story opened with Jonathan Harker (played by Keanu Reeves) leaving his fiance, Mina Murray (Winona Ryder), to travel to Castle Dracula in Transylvania. His first encounters with Dracula (Gary Oldman) reflected the major incidents recorded in the book, though Dracula’s colorful appearance could hardly have been more different from his description in the novel. Their encounter as Harker was shaving produced one of the film’s most memorable moments. Harker had cut himself, and Dracula took the razor from Harker and licked it to taste the drops of blood. Harker was attacked by the three female vampire brides, residents of the castle, and was only able to escape after Dracula left for England.

In England, the three suitors of Lucy Westenra (Sadie Frost)—Quincey P. Morris (Bill Campbell), Arthur Holmwood (Cary Elwes), and Dr. John Seward (Richard E. Grant)—rose to the occasion as Dracula launched his attack on her. Unable at first to determine the cause of her problems, Seward called in Dr. Abraham Van Helsing (Anthony Hopkins). Van Helsing organized the opposition that finally defeated Dracula after tracking him back to his castle.

While Coppola’s version of Dracula is by far the most faithful to the book, it deviated at several important points. For example, as a prelude to the movie, Coppola briefly told the story of Vlad the Impaler, the fifteenth-century Romanian ruler who served as a historical reference for the Dracula character. This prelude indicated the influence of the books by Raymond T. McNally and Radu Florescu, creating fans for Vlad, the historical Dracula. In introducing the theme of Vlad the Impaler, Coppola borrowed an idea from the Dan Curtis/Jack Palance version of Dracula (1973). Curtis used Vlad’s story to provide the rationale for Dracula’s attack upon the specific women he chose as targets in England. In Dracula (1974), Palance saw a picture of Lucy, Harker’s fiance, who was the mirror image of his lost love of the fifteenth century. He traveled to England in order to recapture the love of his pre-vampire life. In Bram Stoker’s Dracula, Winona Ryder played not only Mina Murray, but Elizabeth, Dracula’s original love. To continue the storyline, Coppola allowed Dracula to walk around London freely in the daytime (as Dracula seemed able to do in the novel), but he now used his time in the city to establish a liaison with Mina and, with his suave continental manners, win her love. In the final scene, Mina went to the dying Dracula and through her love facilitated his redemption as he died.

Vlad’s reaction to the death of Elizabeth (or Elisabeta), who committed suicide and hence could not go to heaven in Eastern Orthodox theology, provided Coppola with an explanation of the origin of Dracula’s vampirism. Since she could not go to heaven, Dracula blasphemed God and symbolically attacked the cross with his sword. Blood flowed from the impaled cross, Dracula drank, and presumably as a result was transformed into a vampire.

Coppola also enlarged upon the account of R. N. Renfield, another character in the original novel who was introduced as a resident of the insane asylum managed by John Seward, with no explanation as to the reason for his being there. His mental condition was explained by Coppola as a result of having traveled to Castle Dracula; Renfield became insane because of his encounters with the residents. This earlier connection with Dracula also explained why he, but none of the other inmates of the asylum, reacted to Dracula’s arrival and activities in London.

Bram Stoker’s Dracula was accompanied by a massive advertising campaign which included more than one hundred separate pieces of paraphernalia and souvenir items, including a novelization of the script, a four-issue comic book series, two sets of trading cards, jewelry, T-shirts, posters, a board game, and several home computer games. The TNT cable television network sponsored a sweepstakes the week of the movie’s opening that offered the winner a trip to London, “one of Dracula’s favorite cities!” While it opened to mixed reviews (an occupational hazard with any horror genre film), the Coppola movie shows every sign of taking its place as one of the most memorable Dracula adaptations of all time. It opened in Bucharest, Romania, in July 1993, at which time a special drink, dubbed “Dracula’s Spirits” and made of vodka and red fruit juice, was issued by a Romanian distillery. In spite of the mixed reviews, the movie surprised media observers by becoming the largest box office opening ever experienced by Columbia and the largest ever for a non-summer opening. It played on almost 2,500 screens around the country and grossed more than $32 million.

Feedback
Flashcards & Bookmarks ?
Please log in or register to use Flashcards and Bookmarks. You can also log in with
Flashcards ?
My bookmarks ?
+ Add current page to bookmarks
Mentioned in ?
References in periodicals archive ?
Ryder shared an anecdote recently with Entertainment Weekly suggesting that she wasn't completely certain that she and Reeves didn't get hitched while filming Francis Ford Coppola's 1992 movie Bram Stoker's Dracula .
Winona Ryder reveals accidental marriage to Keanu Reeves
The living dead on film and television, from 'The Devil's Castle' (1896) to 'Bram Stoker's Dracula' (1992).
Dead, undead, but still alive
Lisa Nystrom's essay, "Blood, Lust, and the Fe/Male Narrative in Bram Stoker's Dracula (1992) and the Novel (1897)" inquires into the presentation of "feminine power" within Bram Stoker's Dracula and Francis Ford Coppola's Bram Stoker's Dracula and then extends this by interrogating the complex representations of such power in these works.
Browning, John Edgar, and Caroline Joan Picart, eds.: Draculas, Vampires, and Other Undead Forms: Essays on Gender, Race, and Culture
Presenting an index of all films from the traditionally revered Bram Stoker's Dracula, to the cheesy Dracula vs.
The Theatre/Cinema Shelf
David Walliams' Awfully Good (9.35pm) The comedy actor celebrates misguided but entertaining moments in TV, films and adverts, including Keanu Reeves in Bram Stoker's Dracula and a 1978 black music show.
Pick of the day
Waller examines a wide range of novels, stories, plays, films, and TV movies, including Bram Stoker's Dracula (1897); several film adaptations of Stoker's novel; F.W.
Feeding the vampire phenomenon
BRAM STOKER'S DRACULA (1992) Francis Ford Coppola's version of the book, starring Keanu Reeves and Gary Oldman (right), earned pounds 142million at the box office and scooped three Oscars.
Vampire THE GREATEST BLOOD SUCKERS FROM TV AND THE BIG SCREEN
According to genealogists, Pattinson is a distant relative to 15th Century eastern European ruler Vlad IV Tzepesch (also known as Vlad The Impaler), who inspired Bram Stoker's Dracula novel.
Is Robert Pattinson related to Dracula?
By studying vampire narratives throughout history, from Bram Stoker's Dracula to present-day stories, students practiced critical thinking skills while learning about the genre conventions that have persisted throughout the years and the different functions vampires serve in popular culture.
Bring your holy water
The Tokyo-born, Academy Award-winning designer Eiko Ishioka (who created costumes for such films as Bram Stoker's Dracula, The Cell and Mishima), pulls out all of the stops with her imaginative, Japanese-inspired costumes.
Amsterdam 1999: Haenchen, Altmeyer, Brocheler, Keyes, Secunde, Kruse
From "Bram Stoker's Dracula" to "Interview With the Vampire," movie auds have turned bloodsuckers into stars.
It sucks to be a singing vampire
She likes a really cute guy, her dad won't leave the house, and on her 16th birthday she learns she is descended from Lucy, a character in Bram Stoker's Dracula. So, what else can happen?
Conrad, Liza. High School Bites