[′branch·iŋ]
(computer science)
The selection, under control of a computer program, of one of two or more branches.
(nuclear physics)
The occurrence of two or more modes by which a radionuclide can undergo radioactive decay. Also known as multiple decay; multiple disintegration.
McGraw-Hill Dictionary of Scientific & Technical Terms, 6E, Copyright © 2003 by The McGraw-Hill Companies, Inc.
The following article is from The Great Soviet Encyclopedia (1979). It might be outdated or ideologically biased.

in plants. There are two distinct primary forms of branching, dichotomy and monopodial branching. In dichotomy the growth center divides into two new growth centers, which usually produce second-order branches, almost identical in length and thickness, which can in turn divide into third-order branches, and so on. This form of branching is characteristic of many algae, some fungi, club mosses, liverworts, and other plants. In monopodial branching the growth of the main axis does not stop, and second-order branches, usually less developed, form below the top of the main axis. These branches can also divide into third-order branches and so on. This type of branching is peculiar to spruce, pines, and other coniferous plants, to many herbaceous plants, to leafy mosses, and other plants.

False dichotomy arises from monopodial branching: the growth of the main axis stops and two nearly identical second-order branches, opposite each other, develop below its top and grow beyond the main axis. This may be observed in lilacs (under the inflorescences), the horse chestnut, and mistletoe. Sympodial branching can arise either from dichotomy or monopodial branching. In the first instance one of the branches develops more strongly, growing in the direction and taking on the external appearance of the main axis, and the other branch, which is less developed, becomes more like a branch of the following order. This kind of branching is found, for instance, in selaginella. In the second instance (more widespread) the growth of the main axis stops, and its place is taken by the side branch nearest the top. This kind of substitution can be repeated many times. Sympodial branching is widespread in flowering plants and is inherent in fruit trees and shrubs—lindens, hazels, willows, birch, aspen, rhizomes of grasses, and others. Branching determines the exterior appearance, or habitus, of the plant and is used in taxonomy. [Diagrams of the types of branching are shown in Figure 1.] 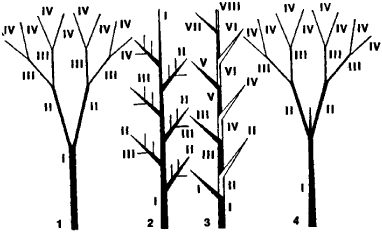 In addition to the stems, the roots, inflorescences, veins (conducting bundles) in leaves and stems, thalli in lower plants, and so forth can also branch. Occasionally shoots appear during branching that are different from the parental shoot (for example, during the tillering of grasses and the formation of runners and stolons).