[brə′vā ′lad·əs]
(crystallography)
One of the 14 possible arrangements of lattice points in space such that the arrangement of points about any chosen point is identical with that about any other point.

a type of spatial crystal lattice first described by the French scientist A. Bravais in 1848. Bravais expressed the hypothesis that spatial crystal lattices are constructed of regularly spaced node-points (where the atoms are located) that can be obtained by repeating a given point by means of parallel transpositions (translations). (See Figure 1.) When straight lines and planes are constructed 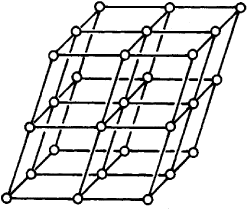 through these points, the spatial lattice becomes divided into equal parallelepipeds (cells). There are a total of 14 types of such lattices, by which the structure of any crystal can be described in the first approximation. Bravais lattices are divided into four types (Figure 2):

(1) primitive, in which the points occur only at the vertices of the parallelepiped;

(2) base-centered, having an additional point in each of the centers of two opposite faces;

(3) volume-centered, in which a point in the center of the cell is added to the primitive type;

(4) face-centered, having one point in the center of each face. 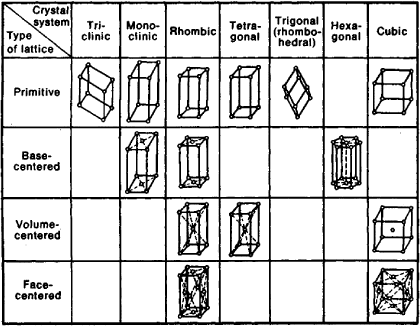 Bravais lattices are distributed among the crystal systems as follows: the triclinic system has one; the monoclinic, two; the tetragonal, two; the rhombic, four; the trigonal (rhombohedral), one; the hexagonal, one; and the cubic, three.

Feedback
Flashcards & Bookmarks ?
Please log in or register to use Flashcards and Bookmarks. You can also log in with
Flashcards ?
My bookmarks ?
+ Add current page to bookmarks
TheFreeDictionary presents:
Write what you mean clearly and correctly.
Mentioned in ?
References in periodicals archive ?
Solid metallic hydrogen was viewed almost as a one component plasma [54, 55], wherein all electrons were degenerate and distributed over a hexagonal Bravais lattice formed from ordered protons [19].
In the solar framework, the electrons would translate freely within the confines of conduction bands formed by the Bravais lattice of the protons.
In any event, it would be difficult to conceive that conduction bands could truly exist without a lattice and the importance of the Bravais lattice in the formation of metals should not be dismissed.
Liquid metallic hydrogen: a building block for the liquid Sun
From the nature of the reduced form, one can determine the reduced form number, Bravais lattice, and the transformation matrix to the conventional cell Reduced form matrix Reduced form First row Second row No.
For organic compounds in NIST Crystal Data, Tables 3, 4, and 5 give the metric lattice statistics for the 44 reduced forms, the 14 Bravais lattices, and the 7 crystal systems, respectively.
Lattice symmetry and identification - the fundamental role of reduced cells in materials characterization