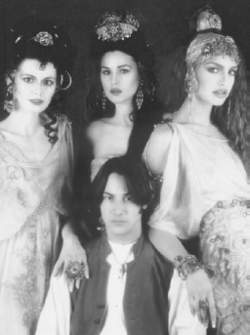 Vampire brides is a popular term that refers to the harem-like arrangement that is believed to exist between the vampire (a male) and his victims (a group of young women). The idea derived entirely from Bram Stoker‘s novel Dracula. During the opening chapters the title character lived in his remote castle home with three young women. They were described by a number of names including “young women,” “weird sisters,” and “ghostly women.” At the end of the novel, Abraham Van Helsing entered Castle Dracula to kill the women, whom he simply called “sisters.” The idea of calling them “brides” possibly derived from the incident in the novel when, following the death of Lucy Westenra, Lucy’s fiance Arthur Holmwood suggested that the sharing of blood created a husband-wife relationship between himself and his now dead wife-to-be. However, the idea also received its substance from various movies which pictured a male vampire in a continuing relationship with several female vampires. Commonly in vampire novels and movies, vampires attack a person of the opposite sex. Most vampires were male and most of their victims, with whom they developed a close relationship, were women. This relationship has often been developed, by implication if not actual reference, in a manner similar to the popular image of the Middle Eastern harem. Frequently, the women were clothed in frilly bed clothes while the man was in formal dress. This image of the vampire brides was present in the two Count Yorga films and in John Carradine‘s The Vampire Hookers (1979).

The idea of the vampire brides emphasized the sexual nature of the vampire’s relationship to his victims. The vampire attacked (raped) his victims and then tied them to him in a slavelike relationship in which love played little or no part. In Dracula, the three women accused him of never having loved and of loving no one in the present.

As part of the 1990s wave of interest in all things related to Dracula, it seemed inevitable that the stories of the brides would be explored by novelists. The first was Elaine Bergstrom in her Dracula sequel, Mina and at the end of the 1990s, Chelsea Quinn Yarbro published two volumes of a projected trilogy telling their story. In his alternate history novels (Anno Dracula, The Bloody Red Baron, and Judgment of Tears) in which Dracula takes over England, Kim Newman turns Dracula into a polygamist who not only has Queen Elizabeth as a spouse/prisoner, but a half dozen others: some real historical figures (such as Barbara of Celje, c. 1395-1441), some female characters from other fictional works (Sadie Thompson, Princess Asa).

In the movies, especially the various adaptations of Dracula, the brides have been minor characters, though they are involved in a famous attack/seduction scene with Jonathan Harker (Keanu Reeves) in Francis Ford Coppola‘s Bram Stoker’s Dracula. They have their most expansive participation in Van Helsing, where Marishka (Josie Maran), Aleera (Elena Anaya), and Verona (Silvia Colloca) assume a place in the battles between the movie’s title character and Dracula.

Feedback
Flashcards & Bookmarks ?
Please log in or register to use Flashcards and Bookmarks. You can also log in with
Flashcards ?
My bookmarks ?
+ Add current page to bookmarks
Mentioned in ?
References in periodicals archive ?
Some are in everyday wear, others dress as fairies, brides, vampires, policemen, schoolteachers, cowboys, Brownies, St Trinian's schoolgirls or the cast of the Sound of Music (did they ever solve a problem like Maria?).
Letter: The butt stops here in a city of excellence