[brēy·wan ¦skad·ər·iŋ]
(solid-state physics)
Light scattering by acoustic phonons.
McGraw-Hill Dictionary of Scientific & Technical Terms, 6E, Copyright © 2003 by The McGraw-Hill Companies, Inc.
The following article is from The Great Soviet Encyclopedia (1979). It might be outdated or ideologically biased.

(in Russian, Mandel’shtam-Brillouin scattering), the scattering of optical radiation by condensed media (solids and liquids) as a result of their interaction with the natural elastic oscillations of the media. It is accompanied by a change in the set of frequencies (or wavelengths) that characterize the radiation—that is, its spectral composition. For example, Brillouin scattering of monochromatic light leads to the appearance of six frequency components of the scattered light in crystals and three components in liquids (one component is of unchanged frequency).

The comparatively strong interaction between the particles of condensed media, which in crystals binds them into an ordered spatial lattice, leads to a situation in which the particles cannot move independently—any perturbation of them propagates in the medium in the form of a wave. However, at any temperature other than absolute zero the particles are in thermal motion. As a result, elastic waves of various frequencies are propagating in the medium in all possible directions. The superposition of such waves causes the appearance of density fluctuations of the medium (small local deviations of the density from its average value), which scatter light. Brillouin scattering shows that light waves interact directly with elastic waves, which usually are not observed by themselves. The physical picture of the phenomenon is especially graphic in the case of crystals, in which elastic waves of the same frequency but traveling in opposite directions (also called Debye waves, after P. Debye, who first examined them) form standing waves of the same frequency. The scattering of light by the standing waves takes place in all directions, but because of interference of light, an elastic wave of one specific frequency is responsible for the scattering in a given direction. Let the rays of incident light of frequency v and wavelength λ (λ = c*/v, where c* is the speed of light in the crystal) be reflected from a plane wave front, changing their direction by the angle θ (see Figure 1). In order for the reflected rays to produce maximum intensity in a given direction upon interference, the optical path difference CB + BD of the rays 1-1′ and 2-2′, reflected from adjacent wave fronts, must be equal to λ:

where Λ = AB is the length of the scattering elastic (hypersonic) wave. The reflection of a light wave from a sound wave is equiva-lent to modulation of the light of the incident ray at the frequency of the sound wave. Condition (1) leads to an expression for the change in frequency Δv of the scattered light:

where v is the speed of sound in the crystal. 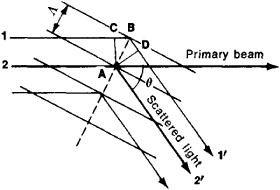 The shift in the frequency of light in Brillouin scattering is relatively small, since the speed of sound in the medium is much less than the speed of light (v/c* is small). For example, for a quartz crystal v = 5 X 105 cm/sec and c* = 2 X 1010 cm/sec, and for scattering at an angle θ = 90°, Δv/v = 0.003 percent. However, these quantities can be measured reliably by interferometry.

L. I. MandePshtam, who theoretically predicted L. I. Mandel’shtam, who theoretically predicted Brillouin scattering (his article, written in 1918, was not published until 1926), proceeded from the concept of standing waves, or compressions and rarefactions of density that modulate a light wave. In 1922, L. Brillouin obtained the same results independently while examining the scattering of light by elastic waves traveling in opposite directions in a medium. In his approach to the phenomenon, the Doppler effect appeared as the physical cause of the “splitting” of monochromatic lines.

Brillouin scattering was first observed experimentally by L. I. Mandel’shtam and G. S. Landsberg in 1930. It was investigated in detail by E. F. Gross. In particular, he observed in 1938 that Brillouin scattering in crystals splits a monochromatic line into six components (this is because the speed of sound v in a crystal is different for different directions, as a result of which in the general case there are three sound waves—one longitudinal and two transverse—of the same frequency, each of which propagates with its own v). He also studied Brillouin scattering in liquids and amorphous solids (1930-32), in which an “unshifted” component of the initial frequency v is observed in addition to the two “shifted” components. A theoretical explanation of the phenomenon was given by L. D. Landau and G. Placzek (1934), who showed that temperature fluctuations of the medium must be taken into account in addition to density fluctuations.

Feedback
Flashcards & Bookmarks ?
Please log in or register to use Flashcards and Bookmarks. You can also log in with
Flashcards ?
My bookmarks ?
+ Add current page to bookmarks
Mentioned in ?
References in periodicals archive ?
The market is broken down for DTS, Bragg grating, DAS, interferometric and Brillouin scattering technologies in relation to the various market segment applications (oil and gas, military, homeland security, smart structures, etc.).
Distributed and Single Point Fiber Optic Sensing Systems Market Forecast, 2019-2023
Other applications, apart from holography, for UniKLasers include semiconductor metrology, Interferometry, brillouin scattering, Raman spectroscopy and quantum technologies.
UniKLasers Unveils New Laser Product
Further power scaling of single-fibre, single-mode output has stagnated over the last decade, primarily because of the onset of nonlinear effects, such as stimulated Raman scattering and stimulated Brillouin scattering (SRS/SBS) and, more recently, by transverse modal instabilities, as discussed below.
Bright future for fibre lasers? Professor Michalis Zervas, from the Optoelectronics Research Centre, charts the rise of high-power fibre lasers and asks what is next for the technology
The PPP-BOTDA works on the principle of the stimulated Brillouin scattering effect, which is that a light photon interacts with an acoustic wave in an optical fiber.
Assessing the Difference in Measuring Bolt Stress: A Comparison of Two Optical Fiber Sensing Techniques
Weak spontaneous Brillouin scattering from acoustic waves had been predicted by Brillouin and already observed using narrow-line spectra.
Stimulated Brillouin Review: Invented 50 Years Ago and Applied Today
Because long gain medium (several kilometers of optical fibers) should be used to produce sufficient Raman amplification in which the stimulated Brillouin scattering (SBS) can be initiated easily.
Comparison of discrete L-band Raman fiber amplifier in two different configurations
Phase conjugation can be generated using different experimental setups which include four-wave mixing, stimulated Brillouin scattering or a simple phase conjugate mirror.
Mind as a virtual phase-conjugated hologram
It is highly affected by stimulated Brillouin scattering (SBS), which limits the maximum pump power that can be used for amplification, so SBS threshold must be increased.
Investigation of Dual-Pump FOPA Performance in a 4-Channel 40 Gbps WDM Transmission System
The BOTDA sensor system utilizes the backward stimulated Brillouin scattering (SBS) of an optical fiber.
Surface Crack Detection in Prestressed Concrete Cylinder Pipes Using BOTDA Strain Sensors
Researchers from the University of Illinois at Urbana-Champaign have experimentally demonstrated, for the first time, the phenomenon of Brillouin Scattering Induced Transparency (BSIT), which can be used to slow down, speed up, and block light in an optical waveguide.
Researchers Use Sound to Slow Down, Speed Up, Block Light
Nonlinear effects within optical fiber such as stimulated Raman scattering, stimulated Brillouin scattering or stimulated four-photon mixing may also be employed to provide optical amplification by injecting a high-power laser beam into optical fiber.
Effects of ASE noise and dispersion chromatic on performance of DWDM networks using distributed Raman amplifiers